Spica's "Lonely" is Unoriginal Yet Refined 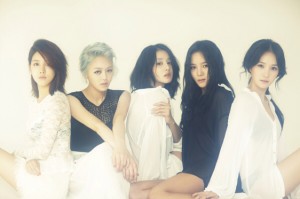 Spica, easily a stand-out girl group of 2012, recently made their fourth comeback of the year with “Lonely.” The group, known for their vocal talent and more mature image, admittedly caused some doubt over their relevancy following the release of their last comeback “I’ll Be There.” The song was very generic and simply not the quality spectators were expecting of Spica. They’d fallen short of the standard set by previous singles “Russian Roulette” and “Painkiller.” But when news of the group’s comeback came fluttering, with reports of Sweetune‘s — the producer of Spica’s debut single “Russian Roulette” — participation confirmed, hope and expectations for the group shot up again. So, with the MV of “Lonely” finally free for viewing, let’s find out if Spica was able to deliver, shall we?

The song itself is a catchy mid-tempo with a very vintage sound, and it’s no surprise considering the producer of the song. The song features a scope of influences — Sweetune’s trademark 80’s touch, dramatic, digitalized synths, and healthy doses of the song’s hook — and an R&B undertone. The track is one of Spica’s peppier tunes, following the more “universally friendly” sound of “I’ll Be There.” This is admittedly a bit of a disappointment, since Spica’s more sinister and mature sound is greatly missed. This vintage-pop inspired track occasionally failed to match up to Spica’s intensity, instead, it’s come off resembling something out of Kara‘s repertoire (which happens to be largely the product of Sweetune as well).

But in terms of the song’s quality, this isn’t necessarily a bad thing. What the girls lack in intensity, they make up for with class and subtlety. Despite the highly vintage and pop-like sound, as previously mentioned, there is a very prominent underlying R&B influence that sets it apart from most of Sweetune’s other compositions. The slight influence establishes an elegance that matches the girls perfectly, and it allows their huskier, more fluid voices to streamline into a rather invigorating sound.

Moreover, as expected of a group like Spica, the execution and vocals are spectacular. The harmonies in the hook are just gorgeous, keeping it from getting redundant or repetitive, a common flaw in Sweetune’s other creations. Admittedly, the rap courtesy of Juhyun didn’t do much for me, but the subtle changes in the instrumental and vocal tones, were quite intriguing.

However, while the song’s peppy vibe didn’t sacrifice anything from the song musically, thematically and visually, there was a fairly notable dissonance. The lyrics — craftily penned by members Boa and Bohyung — told of the woes of aging and loneliness, and the more upbeat sound of the song didn’t do the best in illustrating the lyric’s meaning. If it weren’t for the girls’ skillful emoting, I honestly would not have had any intimation of the song’s message. Likewise, the energetic song felt largely out of sync with the faded, subdued MV, full of sad faces, elegant decor, and great scenery. The setting would’ve been better suited to a “dark” song. 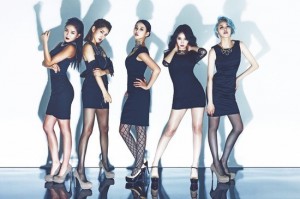 Another issue many are noticing with the effort is its lack of originality. The styling, theme, and choreography (and even the song’s title) are very similar to Sistar‘s “Alone”, the sets are reminiscent of 4Minute‘s “Volume Up” and miss A‘s “Touch.” Occasionally, the song itself reminded me of British girl group Girls Aloud‘s “Can’t Speak French.”

However, to be perfectly honest, I could care less about these similarities. As reminiscent as the song was to other efforts of the past, one can’t deny how well this concept worked for Spica.The feminine maturity and the darker lyrics complemented the girls well, well enough to ignore its minus points. Moreover, while the song wasn’t the best in portraying this comeback concept, the group sang it like no other, adding their own personal embellishments that made the performance just their own. What was actually more disappointing for this author was seeing Spica, a group originally lauded for their originality in the genre, fall into trends.

Furthermore, in the highly condensed nature of the pop genre, it’s admittedly really hard to be original anymore, particularly in the heavily-inspired specification of K-pop. It could just be easily argued that Spica was just following trends, with the chic, lonely girl image being very popular among this year’s girl groups — a result of Sistar’s momentous success following “Alone.” 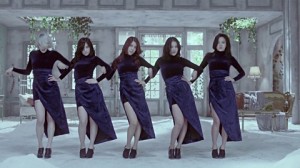 And more importantly, Spica didn’t plagiarize with this effort. While it definitely became popularly associated with them, the image of velvety red dress or sultry, leg-focused choreography don’t belong solely to Sistar, with many precedent acts employing similar movements. The same can be said for the gothic routes as per miss A and 4Minute. And while the similarities are undeniable, there are enough differences to separate “Lonely” from “Can’t Speak French.”

With the girls picking up their momentum, this can be deemed as a largely successful comeback for Spica. As described before, the styling — no matter how rehashed — was spot-on. The MV was filmed under a thematically-fitting faded filter, giving a washed out feel to the video. The darker elements of the clip, and lonely furnishing, gave the song a sinister note, pairing well with the theme.

Despite having a preference (light over dark), the overall effect put more focus on the girls’ elegant and sultry velvet dresses, the red ones in particular looking just stunning. Moreover, all of the girls, except for Boa, had their hair back to darker, more natural tones, fitting the theme perfectly and looking quite fabulous in the process. Boa’s opted for a stunning pale blue color, looking extreme yet subtle, which is what Spica embodies. The choreography, though a little too butt-focused, is in keeping with the elegance and sultriness of the tune. Lastly, the camera transitions also a small mention, since they went along perfectly with the progression of the song.

All in all, this Spica comeback has made up for previous disappointments, further establishing the girl group’s relevancy in the K-pop realm. Spica’s strong points — those being their vocals and maturity — were highlighted properly through a relatively catchy song, and that’s as much as we should be asking of them in their first year of activity. Ultimately, Spica’s “Lonely” gets a 3.7/5 from me.

Readers, what did you think of Spica this time around?