Need a Man? miss A Says Forget About It

It’s been half a year since JYP’s fiercest females miss A said goodbye with “Touch,” and got shipped off for a Chinese debut. We’ve been graced with Suzy’s presence on both the small screen and the big screen in the meantime, and whisperings of whereabouts and selcas have peppered Twitter. But for the most part, since the beginning of 2012, miss A has been MIA.

But with their latest EP album Independent Woman Part III, miss A is MIA no more. At the ready with their MV and promo track “I Don’t Need A Man,” the girls are back in the game to slay hearts and bolster the attitudes of independent women everywhere.

The MV kickstarts by getting straight the point: a montage of images that give off the vibes of a war campaign, and the announcement that “This is for all the independent ladies.” Immediately, the introduction gives this gentle and playful melody the edge of a fight song, and as the MV progresses we can see how the same balance of female strength and femininity become not only the concept and theme, but the song as well.

The break into the choreography appears a little slow, but the girls look better than ever and don’t fail to miss a beat. Though I’m not a fan of the white CGI backdrop or Suzy‘s lipstick, I love the use and characterization of solo shots. The girls are captured doing what girls do: shopping for shoes, jewelry, being out at a lounge, dropping in at the salon. But within these environments, Min, Fei, Jia, and Suzy channel personas of pride and chant their battle cry, “I don’t need a man.” Jia’s set was my personal favorite — I love the take on the princess image there. 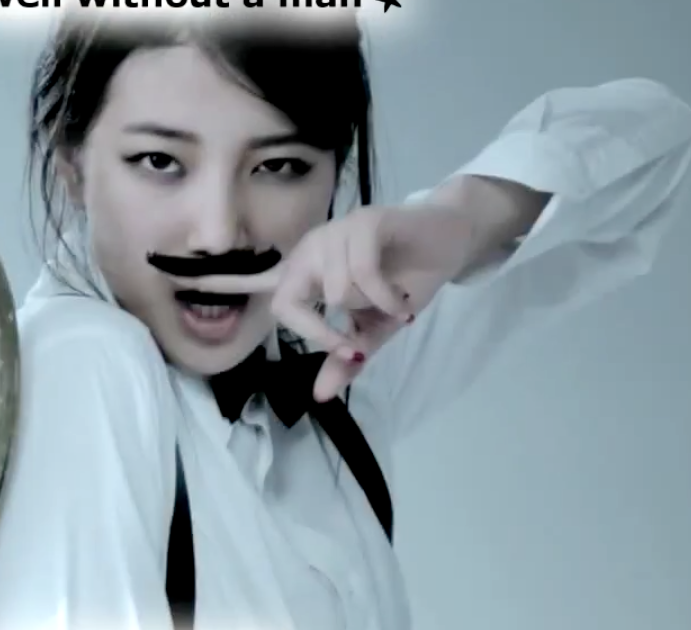 The dance set in front of the graffiti is also cute and edgy. It helps to hone in on the female badass angle the girls were only skirting around before. A quick switch into the rap break meant suiting up, and here we can see miss A going a little Beyonce on us. These scenes were an amusing touch (Suzy looked absolutely adorable) and were great as the last home stretch to drive the point of the song home.

In terms of delivery, I would have liked more attitude from Min and Suzy in earlier parts of the MV. In their solo shots, the two looked a little more focused on delivery rather than having fun with the music. Other than that, the girls have great chemistry, as always, but the choreography seemed a little oversimplified for miss A. It looked a little more like old school WG moves than a fresh take on the fab foursome — it almost looked to easy for them. But hey, it wasn’t bad either.

Overall, the MV had a lot of creative takes that added quite a bit of charm to the presentation. Having each girl represent distinct images allowed the message of the song to be a universal shout out to womanhood. I really loved the way miss A interpreted girl-power in this song — instead of getting all angsty and punk-ish on us, here we have the image of what could be any girl out on her own, doing her thing, which is what makes this song relatable.

To all you independent ladies out there, and to those of us that can say  “this isn’t a ring that a boyfriend bought me,” miss A has a new fight song for you. Enjoy!