Finding Their Niche: Secret's Not So Secret Formula For Success 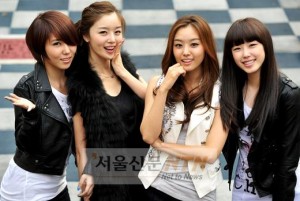 In today’s world of K-pop where debuts and comebacks occur on quite literally a daily basis, a K-pop act’s livelihood is largely determined on its ability to stay fresh and ahead of the curve in their stylistic concepts in order to attract enough attention from the public to stay relevant. With rookie groups debuting at an unprecedented rate, many of which impede upon if not totally rip off the original concepts of more established groups, veteran acts are forced to change up their concepts or undergo a stylistic 180 in order to stay distinct. Established groups elect to try on different concepts to keep fans guessing (SNSD), to (d)evolve from their original image due to member changes (After School), or to go in a different stylistic direction in order to detach themselves from an inferior concept (Chi-Chi). In doing so, maintaining a form of consistency from comeback to comeback proves to be difficult among a sea of changes.

Nevertheless, one group has succeeded very convincingly in developing and sustaining a stylistic niche for itself that has remained prevalent in their concepts throughout nearly all of their promotional comebacks. Originally debuting with an urban RnB concept, the girls of Secret have transformed themselves into the queens of retro ever since their breakthrough hits “Magic” and “Madonna.” Furthermore, with Wonder Girls recently vacating their long-held affair with retro in favor of a more fresh and futuristic(?) approach, Secret lays claim as the next best group to have established a retro identity. 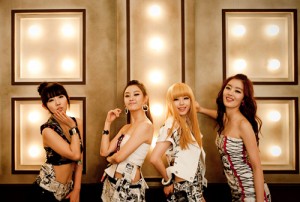 Retro is more than just dressing up in the style of a historical decade. For the lovely ladies of Secret, retro has become its own genre which integrates the grand aesthetics of fashion, music, backgrounds, and cinematography. But instead of starting off as pretentious retro divas (sorry TTS), their strategy was to develop the concept subtly, allowing the style to be gradually associated with the group more and more over time, until it has become the tried and true concept that they are cashing in on today. Let’s trace their steady yet timely transition from their humble beginning as an electro RnB group to becoming the retro queens of K-pop.

Debuting with the much underrated single, “I Want you Back,” Secret first gained wide notoriety when they altered their style with their following release, “Magic.” No longer were they the girls next door as they cranked up the sex appeal, put on some sexy suspenders, and drew attention to the group with a catchy dance. Although barely noticeable in “Magic,” this marked the beginning of Secret’s passioned affair with retro. “Magic” was still in some ways consistent with Secret’s debut look in that it gave off that modern, urban vibe. However, sprinkled into the mix was a heavy jazz influence that overshadowed the electro and RnB sounds in the song, and foreshadowed the retro flavor that was to come. 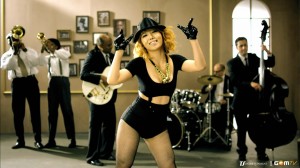 Secret immediately came back with the sassy and jazzy “Madonna,” using the same formula they used in “Magic” to gain even greater notoriety. This time the sex appeal was emphasized by retro fashions more similar to that of Marilyn Monroe, a Fifties American entertainer, than the song’s namesake. Each member donned the personality and the confidence of a classic American celebrity: Jieun as an enchanting pop star, Hyosung as a Madonna-esque dancer, Sunhwa as a Hollywood starlet, and Zinger as a jazz club performer. Furthermore, the sound and flair of the song elevated the retro with the presence of  a blues guitar, drum set, string bass, and heavy brass in the MV. As for the backgrounds, the few that housed each member’s character were a bit lacking in props that would hint at a retro setting. Aside from the antique photo and video camera, it’d be hard to tell that they were even in a different time period. Overall, the success of “Madonna” allowed Secret to solidify an identity that was becoming more retro with each comeback. 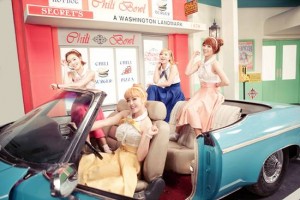 To much voiced displeasure, Secret embarked on an aegyo phase in their following release of “Shy Boy.” Despite the radical change in their personalities, their style remained consistent in staying with and expanding upon their retro identity. “Shy Boy” goes full on retro, complete with a colorful and vivid Fifties rock n’ roll and swing background popularized by the American movies Back to the Future and Grease. The girls are dressed up to go to a swing hall social (but end up having a milkshake instead) and the boys look like they’re ready to crank a devilish tune on their electric guitars. The music has a touch of swing which suits the setting very well. The song became a major success as Secret traded in their sex appeal for a heavy dose of aegyo, resulting in much hardware for their chart-topping song. Not a bad deal. 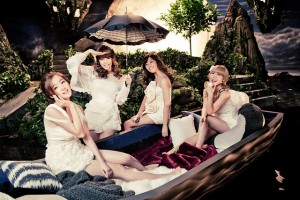 Following upon the commercial success of “Shy Boy,” “Starlight Moonlight” and its teaser video, “Oh Honey,” continued with the formula of combining full-blown retro backgrounds and retro-inspired composition with aegyo cuteness. “Oh Honey” uses simple outfits and a light acoustic sound to create the illusion of a simpler, more innocent time cherished by an older generation (similar to T-ara’s “Roly Poly” MV, just without the disco). “Starlight Moonlight” depicts a retro fantasy concept, entirely decontextualized from any time period, topped off with a message in a bottle and a hot air balloon. The Korean folk-influenced song is very gentle and simple like the song’s dance (seriously, can K-pop choreography get any simpler than this?). The song was also a hit but it definitely did not reach the heights of “Shy Boy.” 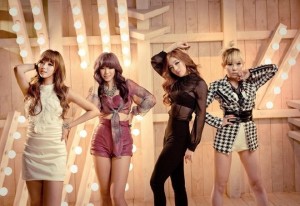 Having strayed far enough from their original strong and confident personalities, Secret’s return to being their sexy and strut selves in their next release, “Love is Move,” came with much fanfare, approval, and of course, more retro. Instead of the fancy sets and soft tunes, “Love is Move” follows very much the same blueprint laid out by “Madonna” in terms of using heavy instrumentals in the composition and relying on confident dancing while the members are draped in sensational retro outfits. “Love is Move” incorporates loud brass and drums (with a groovy electric bass) to create a pop rock sound influenced once again by swing music. The MV is a dance video showcasing Secret’s moves and swagger in their Betty Boop-inspired Thirties outfits. By this point Secret had established a strong retro identity similar to their respected industry seniors, Wonder Girls. So where did they go from there? 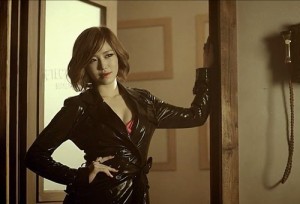 They went full force retro of course. Their latest release, “Poison,” combines all the best aspects of Secret’s retro style. The fashion and backgrounds are magnificent. A dazzling Forties English lady, espionage look combined with brilliantly produced lavish backgrounds make the setting truly come to life. There are plenty of appropriate artifacts that confirm the historical era, such as an antique typewriter, record player, wall phone, and automobile. In addition, the cinematography is inspired by film noir, a genre of crime dramas popularized in the Forties and Fifties. The detectives dressed in their long trench coats and the girls outfitted in their sultry hostess dresses fit perfectly into this historical reenactment disguised as a MV. Furthermore, the composition contains a very fitting saxophone hook along with recognizable brass and drum instrumentals that have become the trademark of Secret and their in-house composers, Kang Ji-won and Kim Ki-bum, who have produced all of Secret’s retro hits. Secret’s secret formula for success lies not only in their determined execution of one particular style, but their consistent development of a concept that suits them very well.

Secret has carved out its conceptual niche in the K-pop market by developing a distinct and consistent style, and thus they are now in a position to elevate their success and recognition in the industry, and ready to unseat Wonder Girls as the new queens of retro with “Poison” gaining much success in the charts. While most other groups undergo drastic changes over time to keep current fans interested and to attract new fans, Secret clearly benefits from the advantages of continuity. What other groups or idols have carved out a stylistic niche over the years?