Another month has gone by and another batch of SNSD photo shoots has surfaced, this time featuring SNSD’s third lead vocal, Tiffany. Featuring smoky eyes, big wavy hair, and of course, lots of legs, this photo shoot was taken at an urban setting, beside garage doors and graffiti’d walls. The background is very bright, often fading to white and blurring out the details, which allows Tiffany to be the focus of every photo. The whitewashed effect also enhances the photo shoot’s evanescence, causing Tiffany to look like the stylish city girl of your dreams. 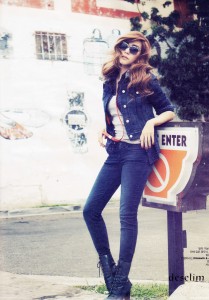 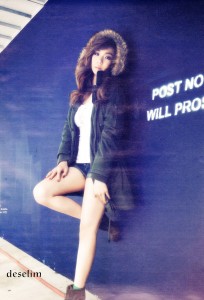 Tiffany’s hair and makeup are stunning in this shoot. This past year alone, she’s gone from black-haired to orange-haired to red-haired to her current golden brown shade. Her hair is styled in big, huge waves and her usual blunt, across-the-forehead fringe is gone. Tiffany may be partial to blunt bangs but I’ve always thought her lovelier with a parted side-fringe, which flatters her pretty oval face. It’s interesting to note that Tiffany’s hair color matches her smoky brown eyes and her eyebrows are more thick and sharp than usual. She looks more mature and sexy for this shoot, not like a bubbly pop idol, but rather a svelte city girl. Her styling also speaks of casual, jaded coolness: denim jacket over a button-up shirt and white tanks with black lace-up boots, spotted glasses perched on her thin nose.  Then, in the sexiest picture of the photo shoot, she only wears a fur-lined jacket over a white tank and tiny denim shorts. 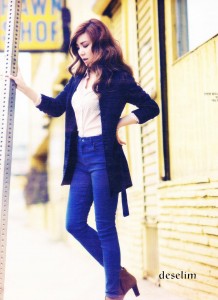 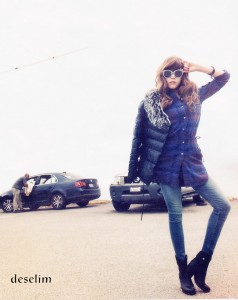 The following picture has Tiffany in bright blue jeans, a cozy sweater, and a tucked-in shirt. She looks frustrated in this photo. For all the photos, I’ve noticed that Tiffany’s legs look longer and thinner than usual, and sometimes even a little twig-like, like in the next photo. Her legs look about as thick as her arm. Aside from that, her posing can be a little strange. A wonderful singer she may be, Tiffany is not a terrific model, and some of the photos have her looking a little awkward. Fashion-wise in the second photo, she looks fine. 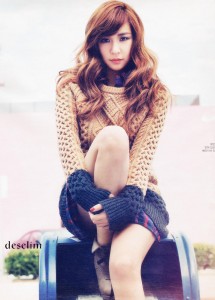 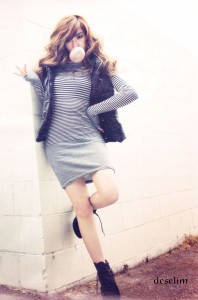 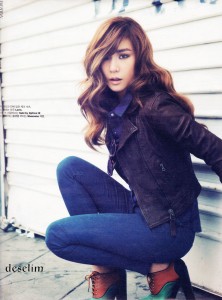 Tiffany’s legs prevent us from viewing up her dress in the next photo, sitting in a coy, flirtatious position. She wears a thick, cable-knit sweater over a plaid shirt. The outfit looks rather scanty, especially since it’s getting close to autumn, but I still love the layered look. The next photo also teases us with a small peek up her dress. This is another photo where Tiffany’s pose looks a little try-hard and awkward. From the held-out hand to the bubblegum to the tilted head to her awkwardly places hand on her hip to her leaning against the wall on one leg, Tiffany tries to convey too much sass in this photo and it shows. She does look pretty, however, and her figure looks a little curvier than usual. The last photo is one of Tiffany’s better ones. She’s crouched on the ground with a rather nervous look. Her winged eyeshadow and partially concealed face help make her look seductive and mysterious.

What do you think of Tiffany’s photo shoot?