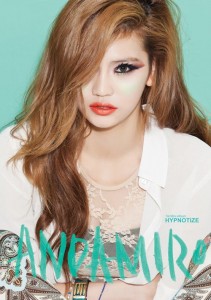 Soloist Andamiro has recently made her comeback with “Hypnotize.” Debuting with a relatively small amount of fanfare with the quirky “Don’t Ask” featuring YDG earlier this year, Andamiro has recently been receiving a fair amount of attention after learning that her next effort — previously mentioned “Hypnotize — would come with an English version as well as a European version. Collaborating with Spanish label INGENIO Media, “Hypnotize” comes with two accompanying remixes, but all versions of the song have a clear euro-pop influence that work well with the offbeat Andamiro.

As said, the song takes clear cues from euro-pop with its light synthesized sound, and the sound complements Andamiro’s very unusual yet intriguing timbre. The synths and Andaniro play off of each other well, creating a diabolically uniform listen that’s pleasing to the ears. The timid verses lead up to a more rich chorus with a clear and potent hook albeit with little transition in between, Andomiro’s tone changing considerably between the two segments. While the transition might have seemed slightly jarring, thematically, it fits with the change in the lyrics (which I’ll expand on a bit more later on), its messiness arguably covered up by the craziness of the concept of hypnosis. Furthermore, the repetitiveness of the potentially grating hook actually adds to the psychotic mood a bit by adding a chant-like aspect that fits with the theme of hypnosis. However, while Andamiro’s vocals are unique and pleasant to the ears, the song itself is fairly formulaic, not really standing out from the sea of releases if not for its European vibes. 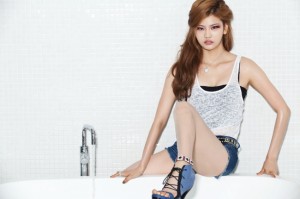 Contrary to my expectations, the English version of the song didn’t turn out lacking or lackluster. Sure, it’s a bit hard to understand Andamiro at some points and some of the word schemes in the chorus seemed a bit awkward. But even if that’s true, Andamiro’s English is still very commendable, and the song’s lyrics and its sound stay very faithful to the original, something I applaud considering how much can be lost in translation.

As for the official remixes accompanying the release, there was the Yuta remix and the Areia Balkan remix. The Areia Balkan remix added instrumental breaks at the beginning of the song and at the song’s bridge, and while slightly misplaced surrounded by the context of rest of the modern song, it proved to be an interesting addition, the instruments invigorating. This remix, if anything, made the difference between between the chorus and verses all the more pronounced through its use of synths, creating a more pulsating sound compared to the original that fits quite well with the concept. As for the Yuta remix, it added heavier synths and a quicker pace for a more dance-friendly, albeit slightly shallower, tune. 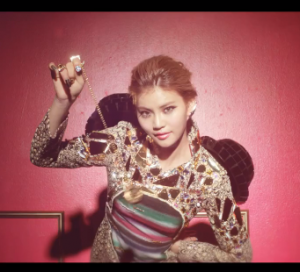 The music video plays with the theme of hypnosis very literally, and as such is very abundant in black humor, giving off a believable creepy vibe. In the video, Andamiro is portrayed as a maid, fallen (literally) crazily in love with her master, who resorts to drugging and hypnotizing the one she loves just so she can spend time with him. I’m guessing that the maid character was employed to imply Andamiro would do anything for her love, while said love, the “master” of Andamiro, stays unresponsive to her affections. This brings an interesting dynamic that could explain the circumstances without directly mentioning it at all.

Now, while I’m a little confused as to why it was necessary for the love interest to be unconscious for Andamiro to hypnotize him, the video highly plays the craziness of the situation and the smitten character, Andamiro consistently carrying out her creepy antics with a psychotic smile on her face. These antics are definitely the main highlight of the slightly disturbing video, with Andamiro’s believably crazy execution being perfect for the dark humor this project presents. She doesn’t even cringe between moments when she gyrates behinds her love interest, drags him out of the room, and straddles him in bed, allowing her execution to spice up this otherwise basic project, dark humor and creepiness aside.

Also something notable about the release is its surprising amount of depth. For a song as synthesized as this, even with a singer as potent as Andamiro, you wouldn’t expect its lyrics to have much meaning at all. And at first glance, the disturbing video just seems like it’s attempting to add some shock factor more than anything else, rather than delivering a message or displaying a storyline. 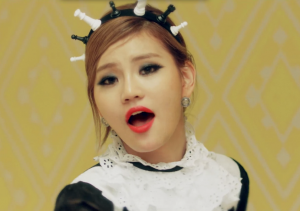 While it could definitely said some parts of the music video were added just to ignite a shock factor and that parts of the song are definitely redundant, behind all that, this effort actually does attempt to tell a tale, and a pretty sad one at that.

Looking at the lyrics, it tells of a story of one who’s so infatuated with her object of affection that she has to resort to hypnosis just to spend time with him and be happy with him. There’s a sense of desperation in the tone of lyrics, and while it doesn’t justify the sinful and invasive actions portrayed, it still shows the protagonist in a more pitiable light rather than just being mentally deranged. And while the video doesn’t do as well of a job in portraying this story, traces of it can still be seen.

Andamiro looks slightly more forlorn when she’s serving her awake master and when she’s in the process of drugging him, and in the scenes portraying Andamiro spending time with her sleeping master, she looked genuinely happy, albeit diabolical as well, adding a different, more sympathetic side to her character. The different sides of this character can also be seen through the structure in the song. As previously mentioned, the verses are considerably more timid, telling of the protagonist’s bottled up desperation, while the chorus is much more free and full, symbolizing Andamiro doubtlessly enjoying the moments she has her love under her control. While the plot could have been more expanded upon and shown more clearly, it’s still laudable for adding even slight traces of plot in the video, especially considering that the song and concept were basically catered for a video consisting of nothing but mindless shock value. 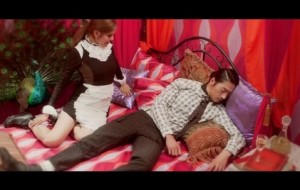 And lastly, aesthetically, the video isn’t lacking either. Visuals and symbols related with hypnosis or manipulation are emplyed throughout the video, from the cages decorating the red room, to the masks abundant in the gold room, to the puppet strings Andamiro used to control her love interest, to the clock Andamiro can be seen using to bewitch her fake lover. The rooms themselves make for a fitting background for the rest of the video, with bright and clashing optical illusions serving as wallpapers and the space tight and claustrophobic almost. One could then complain about the awkward camera angles, but again, the diabolical and messy theme the song it based on could potentially forgive that.

Overall, while the effort as a whole can be considered basic or generic, Andamiro’s “Hypnotize” is able to shine through its surprising amount of depth and Andamiro’s wonderfully smitten execution. It’s a good and catchy tune to listen to, and while I don’t really see the song hitting the global market by storm, it’s still a good release for Andamiro, getting her some highly necessary attention necessary at this risky point of her career. Ultimately, the crazy yet quirky “Hypnotize” gets a 3.8/5 from me. But what do you think, Seoulmates? Were you hypnotized by Andamiro? Or were you immune to all her spells? 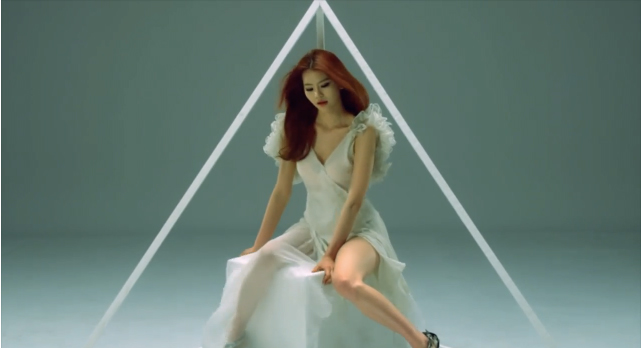 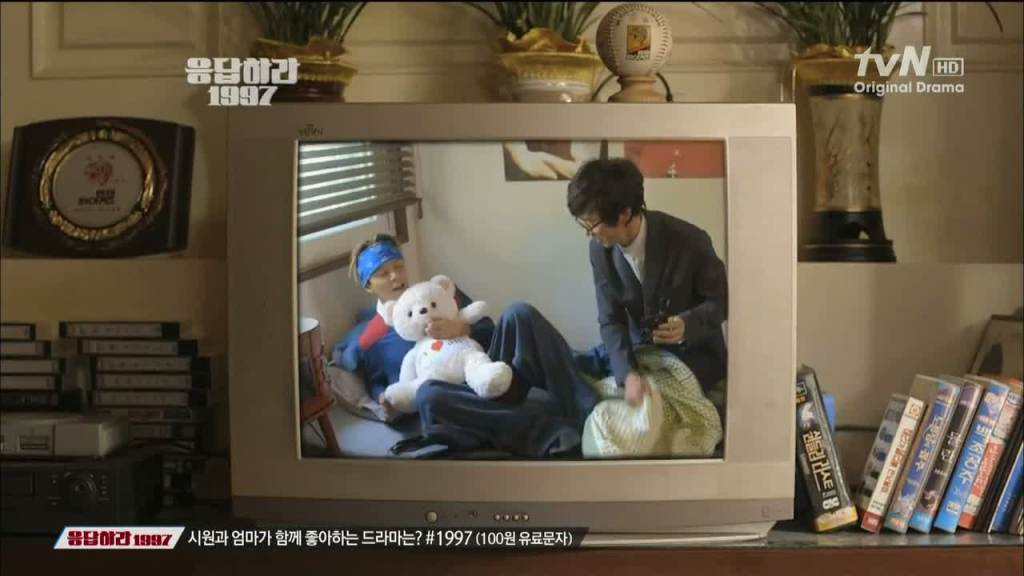 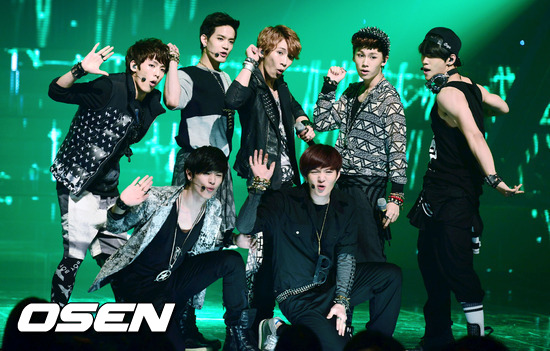