All SNSD's Love is For You

As many diehard SONEs are aware, the lovely ladies of SNSD have a new Japanese single in the works — and while the official package is dropping on September 26th, the PV for the single’s second track, “All My Love Is For You,” has finally been released.

While I, as a fairly dedicated SNSD fan (it’s not like I once waited 11 hours in the boiling Korean sun to watch them perform or anything silly like that), would have really appreciated a new Korean release — it has, after all, been nearly a year since “The Boys” came out, and the Japanese single “Paparazzi” hit the scene not all that long ago — I can’t argue with the general quality of their Japanese songs, nor can I make the argument that their Korean releases have been vastly superior to their Japanese ones.  Though the average fan’s mileage may vary, SNSD’s Japanese material seems to have resonated with an audience that is ready for a more vibrant and mature sound, and my initial impressions of what we can expect for this upcoming single — based purely on “All My Love is For You” — lead me to believe that this newest Japanese endeavor will be similarly well-received.  “All My Love is For You” is a smooth track that is easy on the ears, a blend of R&B rhythms and surprisingly soulful vocals that don’t seem to have been thoroughly sacrificed at the altar of the synthesizer.

So what of the PV? 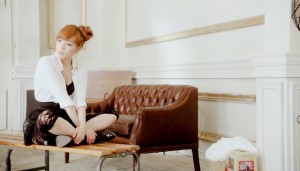 The PV seems to take place in a dance studio, and alternately features soft shots of the girls singing and candid frames depicting a newly-blonde Taeyeon drawing them as they rehearse and look gorgeously pensive.  As with many SNSD MVs and PVs, there isn’t a strong storyline present, but for once I can’t say that I’m terribly disappointed; the interspersing of shots that depict SNSD laughing, talking with each other, tying their shoes, and dancing add an element of free-spiritedness and whimsicality that, in my humble opinion, complements both the vibe of the song as well as the video, particularly when taken together.  I’m also in appreciation of the simple styling and coordination; the girls are dressed principally in variations of black and white for much of the video, and a number of them are rocking boots and matching white and black striped socks.  I’m not exactly sure why Tiffany is featured having two radically different hairstyles, and I must confess to hating both Jessica‘s ridiculous oversized hair bow as well as Sunny‘s entire outfit (I hated her outfit in “Time Machine” as well), but Hyoyeon’s blonde curls are winning big points with me, as is Yuri‘s shirt.

What does the PV do well?  Perhaps my favorite thing about this particular video would be the use of various camera angles in shooting the girls (and no, I’m not talking about the absurd soft-core porn angle that was used to shoot “Genie”).  Despite the fact that there isn’t much activity in the video itself, the various angles through which it presented conveys a thoughtfulness that hasn’t been terribly evident in either SNSD’s Korean or Japanese videos.  Even a shot as simple as Jessica and Sunny sitting on/near a couch is approached from a variety of different angles, all of which are featured in the space of a few seconds.  The dynamism as portrayed through this technique sets the pace of the video, creating a definitive contrast between the relaxed tempo of the girls’ actions and the speed at which the shots change, however subtly.  The PV for “Time Machine” likely could have benefited from the implementation of similar angling; while both PVs feature pretty frames and close-ups, “Time Machine” was highly repetitive and featured very little variation in the way the girls were filmed.  The many different perspectives used in “All My Love is For You” create a more well-rounded video and have the effect of making even the same scene appear different in some way.

Criticisms?  As with the PV for “Time Machine,” the lighting for this PV seems startlingly overdone in the worst possible way.  Though the creative director probably intended for the girls to look as though they were lounging in a brilliantly sunlit room, I find the effect to be overwhelming and dominating — and not in a good way.  Given that this seems to be something of a trend, one could look to the tendency of South Korea and Japan to overvalue paleness as an explanation; to my eyes, however, they look washed out, deathly pale, and unattractive.  Compared with the vibrant and crisp colors featured in “Paparazzi,” the palette of “All My Love is For You” looks exceptionally dull.

Except, of course, for the horrifying group shot that makes its appearance around the 2:06 mark.  In contrast with the rest of the video, which is tastefully minimalist and relatively sophisticated, the middling group shot is a hideous and completely inappropriate interjection of pastel-colored atrocities into what would otherwise be a video that flowed extremely well.  It looks as if a unicorn threw up on a field of Easter eggs.  The girls’ outfits 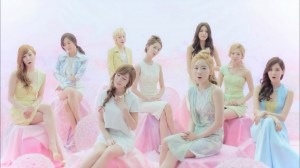 aren’t terrible by any means, but the randomness of the color scheme coupled with the aforementioned awful lighting doesn’t do anyone any favors — and again, I can’t help but feel like the stylists dropped the ball with poor Sunny’s outfit.  Additionally, the entire thing just looks cheap.  I’m not trying to criticize the fact that it was clearly filmed in front of a green screen (many, many videos are), but the bubbly pink background choice is just inexplicable.  It feels like it belongs in a different video — like, say, the extremely low-budget video that JeTiHyun did for “Bad Oppa” way back when.  I just can’t rationalize its brief inclusion, nor can I help but feel that the overall PV would be much, much better without it.  If the PV director wanted to inject some color or pizazz, there had to be other avenues of doing so that would have contributed to (rather than detracted from) the PV’s flow.

Overall, “All My Love is For You” isn’t a life-changing PV, but it is (mostly) well-crafted and solid effort that (mostly) reflects the image and niche that SNSD seem to have carved for themselves in Japan.  If nothing else, it’s a sign of good things to come when their newest single arrives later this month.  I know I’ll be tuning in; will you?