Two A-side singles? All without releasing a repackage album? Is it Christmas at the SM Towers? Jokes about SM Entertainment‘s generosity aside, there are some perfectly legitimate reasons to BoA’s promoting of two songs concurrently. 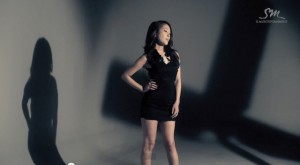 Firstly, as much as “Only One” was a success, and did very well in challenging BoA, in terms of her abilities, as well as in exploring musical territory, there were those fans who had clamoured for her to do a dance track more in keeping with her specialty, and “The Shadow” was probably the answer to their wishes.

Secondly, given how experimental “Only One” was (by SM standards), it was understandable how they would have a more mainstream promotional single serve as a back-up in case “Only One” failed to sell. So now that there had been money spent on “The Shadow”, Music Video and fully choreographed live performances, wouldn’t it be better to just show the finished product in its full glory?

Finally, judging from BoA’s schedule for the remainder of the year, with a full judging/mentoring stint on the second season of K-Pop Star, as well as possible overseas promotions, it was pretty obvious that this release would be the last set of Korean promotions for some time. So all the better to hit the public with two releases at a go, rather than splitting them up.

So, amidst all these, does the Music Video for “The Shadow”, as its name implies, manage to leave a mark for itself?

While Jasper in his album review found the song an enjoyable but slightly forgettable listen, I did like the song too for how it held my attention. However, what also made the song more enjoyable for me was how the lyrics seemed to be largely played up in the music video.

For one, the lighting work was very impressive, particularly the use of shadows. Not only was that a literal take on the song title, it also was a rather nice minimalist touch. Granted, the concept was first seen in Super Junior’s “Bonamana”,  also known for a largely grayscale colour scheme playing on shadows and light.

However, ultimately BoA’s video does it that little bit better, if only for how the shadow details and use of light extend very nicely even on to the finer details of the video. 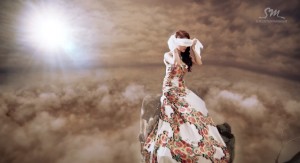 Another plus point for the video was how it did try to tell an allegorical tale. The opening shot featured a tree not unlike the one the one that apparently spawned EXO. However, after that slightly trollish shot, the camera zooms in to show BoA sitting prettily on top of the tree alone, followed by a shot of her blindfolding herself. Now that could be taken as a pretty interesting take of her life, how being at the pinnacle of success looked really great from the outside, but brought with it great loneliness, as well as a distorted or unknowing perspectives on other things in life.

The video then cuts into a scene of a BoA in spirit inhabiting a physical form (possibly a play on how performers take on a different intent when on stage?), which then leads to the dance squence. Lest one think at the point the allegory has ceased, we are then shown scenes of a BoA retreating and trying to shut out the light from a room that she is in.

That above scene cleverly shows BoA balancing her two distinct personalities, the stage persona that never seems to falter and performs for the limelight, and the more reserved off-screen one, that prefers to retreat in solitude away from the limelight for a while, but never really seems to be able to detach from it fully. Witness the deliberately short timing between her sleeping and waking up again, before napping, as well as her watching herself dancing from her “apartment”, a sign that the public persona is never far from her mind. 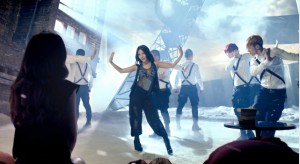 Add to that the few other shots of her dressed differently in distinctly minimalist sets. While in a typical music video, these shots could be at best thought of as a change of scenery, in this song they could be viewed as alternate or unexpected personas to the singer that we all think we know.

Eventually, the whole multiple personas build up until they all meet and converge, after a period of trying to find each other. And, that admittedly is where the story starts to fall apart, in the form of just tamely cutting to the shot of a major dance on a computer generated stage, complete with thunderstorms and all.

The cop-out seems all the more annoying, considering the nicely built up sequences, including one particularly well thought out one where the “Private BoA” suddenly runs out of the room and chases stardust. A desire for alternate dreams, or a desire for the life under the limelight? Now that was something cleverly left for the audience to ponder.

SM videos could often be accused of using special effects, to compensate for a lack of storyline, not bothering with creative use of lighting or nifty camera work. The latter two especially have the positive effect of making videos shot on a budget look far better (see Infinite).

So it was refreshing for once to see a video that uses very well shadow effects from the major things (the scenes with the dancers) to the subtler ones, like the title shot. And most nifty of all? The nice light changes for some of the solo shots, which created shadows that varied from being by the side, to being direct BoA.

Still, there were some sequences that clearly showed obligatory use of the best in CGI which SM could offer, chief of which was that cop-out scene near the end of BoA dancing with her entourage amidst lightning. Not only did the set look artificial, it also meant they had to do away with the clever light effects used in the video.

And what of that SM prized possession, the matrix camera? Thankfully, it stayed largely unused, but for one (probably obligatory) shot involving a very puffy dress, some nifty moves, and some beautiful if rather pointless posturing. The picture below speaks for itself.

Cop-out ending and late-stage CGI overdose aside, “The Shadow” made for a rather interesting watch, thanks to the rather interesting allegory and the nifty camera/light work, things which had been missing in SM music videos of late. In fact, the results do prove the validity of an experienced singer in the SM stable taking more initiative in the finished product, as well as outsourcing music video production occasionally (the music video was directed by an older brother of hers).

For being one of the more entertaining music videos seen so far, and especially from SM Entertainmant, “The Shadow” is definitely not one to lurk in the background, and gets a well deserved 4/5.

So Seoulmates, what were your thoughts on this uptempo single with some allegory thrown into the mix?