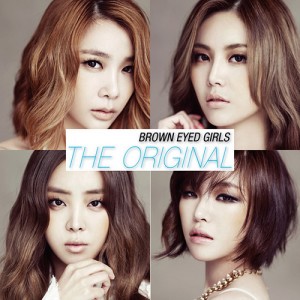 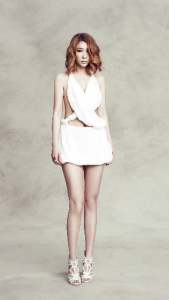 Instead of being an ear-numbing dance track as the MV teaser made it out to be, the first song, “One Summer’s Night Dream,” is a soulful ballad. Both of the tracks for “The Original” were composed and produced by leader JeA, which piqued my interest on how they would sound like, since the only other composition I’ve heard by JeA was the duet song, “We Fell In Love,” sung by Jo Kwon and Ga-in. It’s been reported that JeA had come up with the idea to compose “One Summer Night” after vacationing with friends back in April to express the loneliness she felt at the time. “One Summer Night” does have a melancholic feel, with the slow pace of the percussion instruments and the piano, coupled by the heartfelt vocals of the girls. The song bring up a lot of nostalgia for the days of when old-fashioned R&B and soul music was plentiful, and the Brown Eyed Girls sound like they were born to sing this music. JeA definitely has an ear for great music and music that suits the girls well; seeing as she was the one who helped to put the four of them together, it shouldn’t come as much of a surprise. I especially enjoyed the part right before the middle eight, as the girls began to croon right before delving into some soaring vocals, that part had a Motown vibe to it. As a whole, the song sounded like lounge meets Motown, a stark contrast to the fast-paced earworms that dominate K-pop.

Drifting away from the lounge, we have “Come With Me,” a very gospel-esque R&B ballad, but it manages to have some pop elements as well. The song itself has a very airy feel to it, with the strings and its clapping beat as the backtrack as well as the breathy vocals of the girls, it reminds me a lot of the signature R&B ballads during the 1990s, it sounds very powerful but there also some restraint, especially as they move back and forth between the lower and higher pitches of the song. It’s a much more faster-paced song than “One Summer Night,” with the chord progression steadily picking up and coming to a quick climax with JeA’s high note during the middle eight of the song. I was happy that Miryo’s rap break didn’t take away from the song–they rarely ever do–and completely fit the flow of the song, especially when she slows down to place emphasis in certain parts of the sequence. The song itself is about empowerment and how supporting and helping a friend out goes both ways, with both friends picking up and supporting each other no matter what. On one hand, we hve a song that has us reminscing of days gone by and on the other, we have a song reminding us that support is a two-way street. “One Summer Night” and “Come With Me” are songs perfect for those nostaglic and in need of a remainder that life is better when we’re with those love and support and vice versa.

Sadly, the Brown Eyed Girls will not be promoting either track. These songs are just a remainder that the girls are still alive and well, and are more of a thank you present for fans who have stuck by them until now. I, for one, am dying for the Brown Eyed Girls to come back on stage already, with a full-blown album, but with Ga-in’s solo album planned to come out in late August, I wonder if I’ll have to wait a little longer for a full BEG album. For now, I’ll be comforted with “The Original,” a digital single that proves why I’m an Everlasting in the first place. The songs are absolutely gorgeous and I can’t really decide which one is superior to the other. Both have a slow song-vibe, but approach their slow paces in different ways, with two distinct genres. Both songs help prove the strength of the Brown Eyed Girls, and how little they need synths and autotune to belt out beautiful-sounding music.

So Seoulmates, are you craving for more Brown Eyed Girls like I am, or does the “Original” not fit your fancy? Leave your comments down below!