PSY Returns in Style with Part One of His Best Sixth 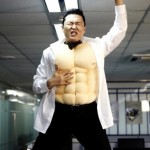 PSY is back on the music scene after a two-year break with PSY’s Best Sixth, Part One. Known for his unconventional style in music and presenting himself, especially with the more regulated idol scene rampant in South Korea, PSY is a hoot to listen to and watch perform, as his first SBS Inkigayo stage for title track of this EP, “Gangnam Style,” shows. And who isn’t amused by his caricatures? PSY is probably best known for his song “Champion,” released in 2002 around the time of the 2002 FIFA World Cup, held in South Korea and Japan. In 2010, PSY joined YG Entertainment, bringing his crazy party sense to lighten up the establishment with “Right Now.”

There are six tracks released in Part One of PSY’s Best Sixth, and the second part is slated for release later this year. The tracks feature several artists from fellow labelmate G-Dragon of Big Bang to renowned ballad singer Sung Si-kyung, among others. 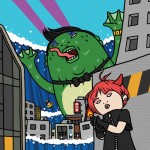 The first track is “Green Frog,” featuring G-Dragon. It starts off with simple notes played against synths. It builds a little with some drums and electric guitar when PSY’s rich voice starts. The vocals take a turn towards rock, adding a gravelly bit that fits the changes in instruments. The entire track is upbeat and full of energy, which starts the album off right. Honestly, when G-Dragon begins rapping, as much as I like his work, it just wasn’t anything notable. It isn’t until he takes the pitch down and inserts a raspier sound into his rap–around 2:45 in the audio–that his input fits the rest of the song. From then until the end of the song, his voice is well-integrated and fits the song, even present in the final vocalizations, ending the song forcefully, very much in contrast to the peaceful start. 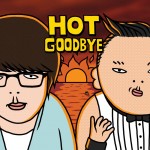 The second song is “Hot Goodbye” featuring Sung Si-kyung. The song starts with PSY’s autotuned voice introducing the song. The background music is clearly in PSY’s style and plays well with manufactured sounds. Sung Si-kyung’s contribution to the song stands out above the music and PSY’s voice, grabbing attention. His parts sound suited for a traditional ballad, but they are even more outstanding because of the unconventional background. And of course, his vocals qualify for superior marks, as always. PSY’s raps have good rhythm and speed, moving the song along well. Sung Si-kyung ends the song with his well known, low-pitched, “sleep well.” Though the song is for dance, there is a light melancholic overtone, suitable for a goodbye, as the title indicates.

The third track is “Gangnam Style.” It’s the only song on the EP that does not feature other artists, and suitably so as this is the title track.

From the teasers for the music video, this song has a hook like no other: “Oppan Gangnam Style!” That one line alone, the way it’s said and echoed gets stuck in anyone’s head and is a highlight of the song whenever it reappears. It’s also the first line said in the song, setting up the listener for its repeats later. There’s a strong house beat accompanied by varied electronic sounds that fluctuate with PSY’s pitch. The rapping, talking, and singing are brimming with confidence and power, making the song a great listen and a true star on the album. The track also is firmly within PSY’s style without being redundant within his discography. 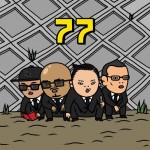 The fourth song is “Seventy-Seven 101,” featuring LeeSsang and Kim Jin-pyo. Though announcing singers or composers of a song can get annoying at times, PSY does that at the very beginning in a catchy manner. All four artists involved in the song have an equal part to shine: signs of a good collaboration. PSY’s the first to rap in a calm manner with sharp words. LeeSsang’s Gil moans the chorus with “Do you remember” and ad-libs. Kim Jin-pyo is the next to rap with his style–expressively-said words and varying pitch. LeeSsang’s Gary is the last to rap with his swag overflowing into the song in his lazy-sounding style. Little piano notes are excellent accents along with the backtrack that features high-pitched back singing in a style that’s a throwback to past songs, very fitting considering the chorus. The entire song is full of nostalgia and carries itself calmly and respectably. 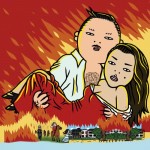 Fifth is “What Should Have Been,” featuring Park Jung-hyun, also known as Lena Park. The song a faster-paced ballad with clear R&B influences. The music is simple, letting PSY and Park Jung-hyun rap and sing to their heart’s content. In comparison to the rest of the EP, this track is a letdown. It sounds like an older song, but doesn’t have the pizzazz normally associated with PSY. While it could be considered a welcome change as a smooth song with pleasant vocals, it really doesn’t bring anything interesting.

A rock song, this fuses Yoon Do-hyun’s style with PSY’s in a welcome way. Yoon Do-hyun starts the song off, followed by PSY, both singing with a simple piano background. It gives the appearance of a ballad at the start, but the introduction of instruments later on along with purposeful gravelly voices and strains instantly transforms the song into a rock ballad of sorts. The interplay between quiet and loud in the song creates stark contrasts that keep the song interesting. The entire song rings with a sense of finality, fitting as it’s the last song of the EP. 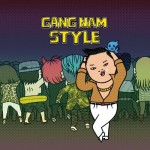 Part One of PSY’s Best Sixth displays PSY’s ability to create music and collaborate with others to mix styles in an interesting way. The six songs manage to touch on different genres of music, some to a more successful level that others. What’s consistent, aside from PSY, is that 2/3 of the songs are on the sadder side–the first and third tracks are too explosive and upbeat to ever be sad. It seems to be an experimental attempt to see how well PSY’s obvious style does with others, and even what kind of music he can produce. On this album, it was nice to see an explosive title track. Often, some albums have catchier or just better tracks that aren’t promoted, but I think “Gangnam Style” is the shining star and is the one that defines PSY best. Overall, I give Part One a 4.5/5.

How did PSY do for his return? Any favorite songs or even other collaborations you’d like to see happen with PSY? Leave a comment with your thoughts!