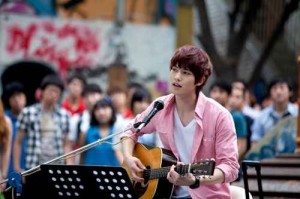 I’m back after a week off camping in the wilds of Hawaii–and what a week to miss with so many things going on in K-pop including the huge comebacks of 2NE1, Super Junior, and T-ara and in my fave K-drama of the moment Jung Yong-hwa and Juniel making cameos while Jong-hyun‘s character sang on the show.  Well, no use crying over missed K-pop things!  This last week in K-pop saw: Brave Entertainment debut their boy band Big Star and their 300 million won MV for “Hot Boy“–hope that pays off, SNSD‘s Hyoyeon and her partner Kim Hyung-suk made it to the finals of Dancing with the Stars Korea, Season 2, 4Men and Ulala Session both released a second version of their MVs for their songs from the Gaksital OST, B.A.P. released their “Goodbye” MV featuring matoki, N-Train released “I’ll Forget You,” F.T. Island released the PV for “Top Secret,” Boom released a new song “Let Me Play” featuring Gaeko, A-JAX got some “Hot Game” featuring KARA‘s Nicole (loved her shoes), NU’EST wants some “Action,” and 2PM‘s Wooyoung made his solo debut with “Sexy Lady.”

So much things going on in K-pop, so little time.  What 5 Things happened in K-pop last week that I think were a little more special than the rest?  Keep reading to find out and as always if you’re not up-to-date on your K-pop turn back now because spoilers most definitely will ensue.

The Hawaii Korean Chamber of Commerce held its 11th Annual Korean Festival on July 14th at Kapiolani Park on the island of Oahu.  An estimated 30,000 people attended the festival which featured Korean Food, traditional Korean dance performances, an autograph signing session with actor Seo Ji-seok, and a concert by Kim Wan-sun.  Also throughout the day the SM Town Hawaii group did their flash mob performance to a medley of SM Entertainment artists’ songs.  The group had been practicing for months with the hopes that their efforts would show that Hawaii has a K-pop audience and encourage SM Entertainment to bring an SM Town concert to Hawaii. Imua SM Town Hawaii!

On the July 13th episode of KBS’ Music Bank, Sistar got a surprising win over Super Junior marking their first music show win for their summer jingle “Loving U.”  The girls seemed just as surprised as everyone else over the win as they were speechless at first, began tearing up, and in the end gave the audience a full bow.  Fellow SB writer Nicholas told me I had to check it out and I’m glad that I did.  There’s been a lot of talk over whether or not these music show wins mean anything and while I do agree that the voting system of these awards are at times dubious, it’s obvious that a win means a lot to these hard working idols–especially the newer groups. Here’s to a well deserved win for Sistar, congratulations!

I’m sure it would have be even funnier with subs, but I enjoyed Saturday Night Live Korea Season 2‘s episode featuring the boys of Super Junior.  They left almost no idol related subject untouched and weren’t half bad at acting either. I especially enjoyed the skit where Eunhyuk, Kyuhyun, Shindong, and Leeteuk talk crap about each other behind their backs.

In a recent interview, Tiger JK had said he would like to work with the Wonder Girls‘ Yubin and when hearing of it Yubin in return had said she had always wanted to work with Tiger JK. Well, ask and ye shall receive.  Tiger JK, Yubin, and Bizzy throw it down with the song “I Want You” on the last episode of Lee Hyori and Jung Jae-hyung’s  SBS music show, You & I.

After a two year hiatus PSY returns with his 6th studio album.  The title track “Gangnam Style” dropped on the 15th and the song was composed entirely by PSY.  He also choreographed the MV which includes cameos by Hyuna, Noh Hong-chul and Yoo Jae-suk. The great thing about PSY is that he doesn’t take himself too seriously, he has his own distinctive sound, he knows how to have fun, and he’s not above making fun of himself.  Check out his boss MV for “Gangnam Style.”