Key Players in the Game of K-pop: Managers

With such busy schedules, K-pop idols typically travel with their own posse, consisting of stylists, bodyguards, and of course, their ever-important manager(s). Managers for K-pop groups are frequently overlooked by fans, because they do most of their work “behind the scenes” and therefore are not seen on screen and only briefly when accompanying said groups to their various activities throughout the day. In actuality, managers actually play one of the most important roles in ensuring a group’s success — many of them eat, sleep, and breathe with the idols they are in charge of in order to make sure all of their idols’ schedules are executed flawlessly.

Although we, as K-pop fans, don’t see managers very often, fleeting glimpses of them can be caught if their group is participating in a variety show that is filmed outside of a studio. For example, Infinite‘s manager was frequently seen during Infinite Sesame Player –he was the one who informed the boys that a “girl group” was coming to visit their dorm and the one who made Myungsoo and Sung-gyu dance for watermelon on a hot summer day. Recently, he was seen again on Infinite Ranking King, partnering up with Sung-yeol to pop balloons by hugging each other and jumping rope together. On 2PM‘s Wild Bunny, we watched the mischievous members team up against their manager by lifting his van keys and stealing out of the dorm for a night of clubbing, before ultimately getting chased down in an empty parking lot at dawn. Besides those short clips however, most people, while aware that managers are omnipresent in an idol’s life, don’t seem to know exactly what their job consists of. 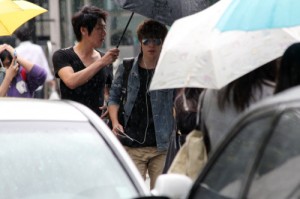 All K-pop managers are well-versed in the rigid way the K-popiverse is run. There are a few, those who have been members of older idol groups who have disbanded and chosen to stay behind and manage the newer groups their company churns out, who have actually had personal experiences in terms of performances and public appearances. This experience is extremely important because managers are in charge of an idol’s daily schedule, which includes everything from music show tapings, to interviews, to radio shows, to shoots for magazines and everything in between. They need to know how to be efficient in getting their groups to where they need to be on time. Their responsibilities are heavy, as they also have to keep their group in check at all times. 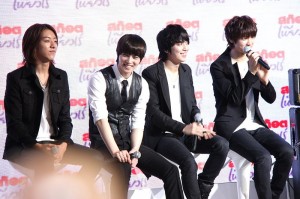 Because managers accompany their charges everywhere, it’s no surprise that they can get physical with fans at times. An incident was reported in 2010 right after C.N. Blue‘s debut about their manager hitting fans in front of the KBS Building as the group was prevented from entering for rehearsal. Apparently the fan had grabbed one of Jong-hyun‘s hoodie strings and the manager reached into the crowd as a result and slapped her head twice. That kind of behavior is unacceptable, as although fans can get crazy and ridiculous sometimes and stress the group and their staff out, hitting a fan is still behavior that should not be exhibited by anyone. This quickly brought C.N. Blue’s name into the news and the manager was punished by their company. Usually “nugu” managers, or managers of new groups, don’t get that physical or blatantly mean with the group’s fans, because they want the group to have a positive relationship with the media. Unfortunately, “nugu” manager or not, there have been many accounts of fans suffering verbal or physical abuse at the hands of a manager. 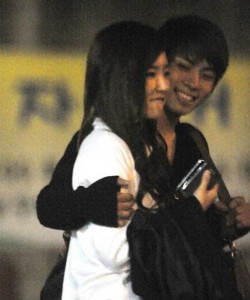 With managers playing such an important role in an idol’s life, it’s no wonder that many idols forge close relationships with their managers. Do a quick Google search and you can find pictures of many idols present at their managers’ weddings. K-pop artists know that they are dependent upon their managers for almost all aspects of their life — making sure they get to places on time, getting them fed and the occasional hour of sleep, keeping them in contact with their family members, and perhaps (if their company allows it) even help them carry on a relationship in secret.

In Queen In-hyun’s Man, a tvN drama that aired recently, the main character, Choi Hee-jin (played by Yoo In-na) is a famous actress starring in a drama as Queen In-hyun. Not only does Queen In-hyun’s Man give us a look behind the scenes at K-drama world, we also learn a little more about how an actress carries out all her activities smoothly with the help of her manager. Jo Soo-kyung (played by Ga Deuk-hi) is the constantly skeptical and occasionally frazzled manager of Hee-jin, and she’s not too happy about it, having to deal with her client’s crazy love life. Most real idol managers are probably pretty happy they don’t have to deal with time-jumping boyfriends and whatnot, but in K-pop it’s hard enough to cover up a normal relationship. Idols like Jonghyun (when he was taken by Shin Se-kyung) and Junhyung resorted to going out for midnight walks or drives with their girlfriends to avoid the publicity, which were events obviously orchestrated by their managers. 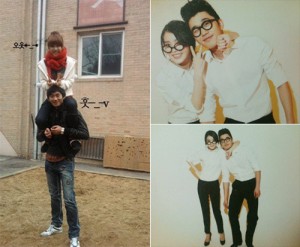 One thing that’s interesting about managers in K-pop is that they are almost always male. There are a few female managers out there who manage solo artists, but the bigger, more well-known artists who have more activities are under the guidance of male managers. For male groups, it’s to be expected because a manager has to discipline his group when needed in order to make sure they all stay in line, and for female groups, “oppa managers” also exercise more influence on the personal lives of the members, something that the entertainment company wants. During promotional phases, managers dorm with their charges to make sure they can get to all their late-night activities on time. In Exo-M, Tao chose to share a room with his manager to improve his Korean. IU is also known for sharing a close relationship with her manager — she snapped pictures of the two of them together recently and sent her uncle fans into a tizzy, but it’s just another sign of just how crucial a manager’s presence is to an idol. 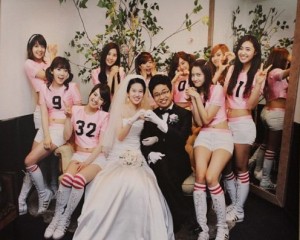 In American music, while entertainment companies are in charge of their respective recording artists, and dispatch managers to make sure everything runs smoothly, there is not this kind of crazy reliance on a manager by the artist for all aspects of their life. K-pop moves at a much faster pace, and managers are expected to be there on the sidelines, making sure nothing goes wrong and running the show (without being seen, of course). They have to have incredible amounts of patience to be there 24/7 (literally) for their groups, even if it means flying halfway around the world just for a showcase. The job of being a manager in K-pop is no easy task, and these guys are definitely admirable for taking on such a tough job.

Of course, being a manager for an entertainment company comes with perks too — like having all nine SNSD members attend your wedding. I don’t know how the bride was okay with that — I certainly would have suffered some serious self-confidence issues if they showed up at my wedding.