Side B: The Most Incredible Busters In Town 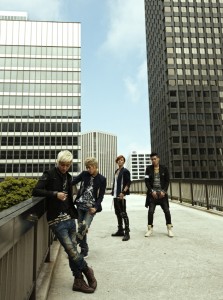 Born under the infamous hip hop label Jungle Entertainment, M.I.B itroduction last year was the most expensive debut in the K-music industry, as well as Jungle’s first group ever. Comprised of four members: leader 5zic, Cream, SIMS and singer Kangnam, M.I.B failed to impress with their first single, “G.D.M.”  This single, however, was a part of Most Incredible Busters, the group’s first full-length album, an album composed and produced by the members themselves.

With one full-length album and one mini-album on their résumé, M.I.B recently came back with yet another mini, Illusion, after being unable to promote their last track “Celebration” after tragedy, in the form of a fire that killed two of their stylists, struck. After that unfortunate event, M.I.B reinvented themselves towards more melodic sounds. In this edition of Seoulbeats’ Side B, we’ll dig a bit deeper into the discography of these Most Incredible Busters.

Their first album was a more hip hop-centered album, although their single “G.D.M” failed to reflect it. Their debut, aside from being apparently utterly expensive, gained some attention because each member released a solo song before their official debut. The four songs, while irregular in their quality, showcased each member’s talents for both rapping/singing and composing; especially leader’s 5zic solo song, “Beautiful Day,” which is also one of the best tracks from the whole album.

“Beautiful Day” features singer Bee, whose voice perfectly fits 5zic’s rap. I think I mention this in every article I write, but I’m a total sucker for violins in hip hop songs – that, plus the piano, makes this song totally epic. It does help that 5zic’s rap is particularly melodic and smooth, even to the point that the blatant Engrish in the chorus can be overlooked, because honestly–this song is just dope. So even though “Beautiful Day” did see some promotions, it deserves to be given a bit more of the spotlight.

Also from their first album is ”모두 다 뻔해” (Everything is Obvious). Although it has a strong electronic base, this track also has a stronger hip hop vibe. It offers a perfect equilibrium of the member’s abilities, with a catchy hook by 5zic and a chorus that showcases Kangnam’s singing abilities. SIMS’s rap is also especially powerful in here, and there’s something really catchy about the whole song.

“Who’s Next” basically follows the same pattern: a catchy electronic base and autotuned chorus–which sounds fairly well in the context of M.I.B’s production, but still could be toned down a bit. It also includes a declaration of principles, in case somebody was wondering whether they were aiming to compete with the top idol groups or not:

Their second album, Celebration, only featured the title track and a couple of remixes, so next on the list is a track from their last work, Illusion. In “더치페이” (Dutch Pay), featuring Hafsa, the electronic base takes over the song, but in a more refined way as compared to their previous albums and the addition of a feminine voice is also quite refreshing.

Closing this list of M.I.B.’s under-appreciated songs is “낙화 (落花)” (Falling Flower), the last song on their last album. It’s a ballad with rock-ish sounds and that, much like the last album as a whole, makes the most of Kangnam’s voice, which most of the time is underused. This song resembles their last single, “Only hard for me,” and compared with M.I.B’s previous works is much more emotional. 5zic’s rapping fits the style, as seen on the aforementioned “Beautiful Day,” and SIMS also seemed to adapt to the new style of their last album pretty well.

M.I.B is one of those groups whose full potential can only be heard when listening to all of their songs carefully; “G.D.M” failed to reflect the spirit of their debut album and even though “Only hard for me” is not a bad choice for a single, it also hardly made justice to the variety that Illusion offers–musically speaking.

Because the members themselves write their songs and are involved in the production, it is a pity that most of their songs get overlooked. Don’t miss the chance to listen to their whole albums because they have a lot to offer even if you’re not especially fond of hip hop. And don’t forget to comment below with your favorite Side B songs by M.I.B!