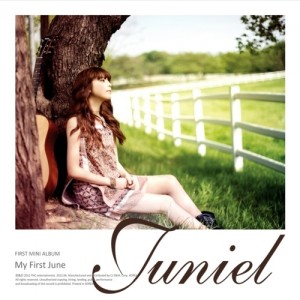 For all those in the northern half of the world, summer is basically here! Other than the onslaught of summer comebacks announced, summer also brings the warm sun, lighter clothing, a simpler lifestyle, and a desperate need for air conditioning (but maybe this last one only applies to this writer). An album that really personifies summer is Juniel‘s debut album, My First June. It’s light, simple, warm and a perfect listen for a day lounging on the beach or strolling aimlessly in the sun.

Juniel is FNC Music‘s first female act, the same company that houses bands C.N. Blue and F.T. Island. Similar to her label mates, Juniel’s music has a strong emphasis on her instrumentals. This is evident with her debut album which heavily and tastefully features the acoustic guitar, Juniel’s instrument of choice, among other instruments. Similar to her sunbaes C.N. Blue, Juniel also started out in Japan as an indie artist, but was able later to have a major debut there. As such, her music has a sort of Japanese vibe to it which is also evident with My First June.

The album starts off with its title track “illa illa,” a light and melancholy song about recalling one’s first love and how you can’t ever get them back. Despite the sad nature of the song, Juniel manages to sound warm and emotive throughout. She was able to express the severe and growing feelings of longing, as well as the innocence of first love very well in this song, her voice carrying a bittersweet element to it. The verses stay relatively quiet and mournful before a haunting pre-chorus transitions us to a strong and powerful chorus that carries into a bridge that showcases Juniel’s vocal capabilities. Furthermore, the instrumental was utilized effectively, with the piece starting off with slow acoustics that gets added on to with more sounds until we reach a climax, thematically expressing the growing desperation and longing the song details.

“illa illa” was also accompanied with a music video starring C.N. Blue’s drummer Minhyuk. The MV was beautifully shot with a filter that further added into the melancholy of the whole video and helped create some amazing visuals. The flowers and vintage decor looked amazing and fit with the theme of first love and some of the metaphors highlighted in the lyrics. The story line, while not the most original, was handled well as it was intended to and that was to show the innocence of first love and how one can’t go back to it as they please. The acting wasn’t awkward with the female lead able to portray a growing yearning and in all, the MV was a precious, adorable piece that complimented the song. 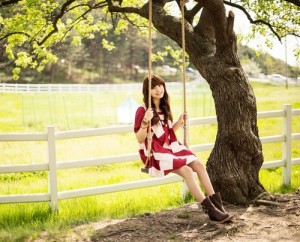 The album continues with track “Ready Go!” The transition from the mature and haunting “illa illa” to the cutesy and bright “Ready Go!” is jarring to say the least, made extremely evident with the very aegyo-filled opening. The change in mood was a bit uncomfortable and so was the change in sound. “Ready Go!” is a Korean remake of Juniel’s previous Japanese song which makes sense as it sounds very much like a J-pop song. It’s bright and colorful, and features a pace much faster than the majority of the songs on the album. Also, Juniel sings in a higher tone compared to the other songs and her voice is the main highlight as most of the instruments are faded to allow her voice to get through.In many instances that wouldn’t be such a bad thing except that here Juniel sounded somewhat artificial in this song. “Ready Go!” is not necessarily a bad piece that is unfitting for the album’s theme as it is very much summer-y and fun and has a pretty colorful, albeit faded instrumental–but it stands out a bit too much from the rest of the songs musically and tonally, making it seem a bit misplaced.

Following “Ready Go!,” is “Everlasting Sunset” which has Juniel back to a slower tempo acoustic track. This song is also a Japanese remake, however unlike “Ready Go!” this song fits perfectly with the rest of the album. The simplicity of the song is very much appreciated, and Juniel’s voice really shines through and instead of having her overcome the instrumentals, her voice gets complimented by it. While the simplicity really made this song work, it also made the song somewhat boring, as nothing was really noteworthy or attention grabbing about it. 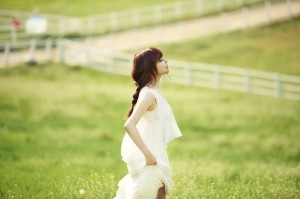 What was attention grabbing, however, was the next track “Mask.” The use of guitar in the beginning was able to set the mood for the entire song, and Juniel using lyrics from “Twinkle Twinkle Little Star” further helped set an eeriness to it. However, the song picks up by the chorus which distinctly features jazz influences. While the change in sound made a pleasant, yet unusual listen that livened up the entirety of the album–Juniel’s execution was amazing in this song, I would have preferred it if the song stayed closer to its introduction, keeping its haunting lullaby vibes. Otherwise, “Mask” is a great fit for the album that helped strengthen its quality as a whole.

Finally, the last track of the album is “Stupid,” featuring C. N. Blue’s Yonghwa. As said in Bethany’s MV review, “Stupid” is the perfect song to start the summer with. It is laid-back and very simple featuring acoustic guitars and is a song that one would play to clear one’s mind. The lyrics are very warm, talking about how a girl feels like a fool for being so in love with her boy, and the execution of both Yonghwa and Juniel’s vocals was able to portray that well. Furthermore, Juniel and Yonghwa sounded heavenly together. Their harmonies were on point and their voices complimented each other well. 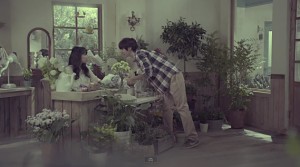 Overall, My First June was a pleasant, simple, bright listen that is perfect for a summer playlist. For the most part, the album is cohesive tonally, musically, and thematically, featuring the emotive and warm voice of Juniel along with colorful and effective instrumentals. While there were a few flaws, it was a great debut effort overall and Juniel’s experience in Japan sets her apart from other rookies, if Juniel could even be described as such. With their similar tone, image, lyrical content, and fondness for acoustics, Juniel has repeatedly been compared with the nation’s little sister IU, but there is enough distinction between the two to appreciate both. While IU helped set the spring with her album The Spring of a Twenty Year Old, Juniel can do the same for summer with My First June.

Recommended: “Stupid” and “illa illa”
Worth a Listen: “Mask” and Everlasting Sunset”
Out of Place: “Ready Go!”

Ultimately, the album deserves a 4.5/5. While the album was slightly flawed, Juniel has a great future ahead of her when it comes to her Korean career. While soloists generally struggle to get attention, if we go by My First June, it seems like Juniel would be able to do just fine. What do you think, Seoulmates? What’s your opinion of Juniel?