August brought us hits that spurred wave after wave of discussions. From SNSD’s comeback with “All Night” and “Holiday,” to Jackson’s “Papillon,” the past month has closed off summer with a good mix of melodies. However, it seems that many impressive debuts were left out of discussion on Seoulbeats. Right before we head out into the breeziness of fall, here are some August releases that deserve our attention:

With their pink dresses and polka-dotted aesthetics, this lovely group might come off as too girly for many. Even the title of the song, “WooChuChu,” might make some cringe. For those familiar with K-pop girl groups, they are working with a typical concept – the sweet girl type. I was initially put off by it, but my advice for everyone is to throw that first impression out of the window.

Though “WooChuChu” might appear as a ridiculously cheery song, you might be surprised how well it’s composed. The voices are resonant and layer upon each other in harmony. The vocals are surprisingly grounded for a newly debuted group. Though the melody sounds upbeat from the start, the beat change before the rap offers a good twist, pulling the song away from the stereotypical girl group pop melody. The five-member group balances rap and vocal parts fairly evenly, making sure that the track is wholesome without sacrificing any member. Forgiving that this is merely a debut song (hence the ridiculous and overt concept style), the girls’ vocals reveal potential for even more stunning tunes in future – from the experienced rap sound to the stable high notes, they are certainly a group to look forward to.

Shannon has always been an artist the spotlight misses despite her stunning vocals. She has been in the K-pop scene since her debut in 2014, but she constantly seems to fall between the cracks. Not appearing on variety shows of any kind, or drawing huge attention to herself, it is such a pity that she is not given the appreciation she deserves.

Her comeback this time with “Hello” is a hopeful melody with a modern, contemporary twist in its choreography. Gorgeously encapsulating a city of possibilities, Shannon’s “Hello” is beautiful to groove and chill out to on a summer night. Not exactly cheery, the tune is musing with a background of electronic beats. The alternations between her dance and the more static images of her pondering, the MV paints a portrait of modern living — one that is often solitary. However, “Hello” dissipates the sense of solitude attached to such an urban, concrete jungle, instead offering faith and hope in a seemingly cold setting. A perfect song for a summer night out, it imagines a neon city night into existence through the lyrics and MV’s minimalist aesthetics.

Most of us will probably be familiar with Juniel’s “illa illa,” a tune that brings a country-folk style with slightly heavier rock melody. But do not be too taken aback upon listening to “Last Carnival” as the sparkly clean image of “illa illa” has morphed into a quirkier music style. “Last Carnival” brings into picture a funk style with its predominant bass line. Coupled with Juniel’s raw vocals, we get to feast our eyes and ears on a bittersweet track. Perhaps what caught my attention was the narrative strain of her lyrics that mixes in a tinge of poeticism:

It is playful but also alienating in certain ways. The tune makes one feel like Alice falling through a rabbit hole into another dimension, where everything is strange but also a sensory pleasure. Playing both with her music and the aesthetics of her performance, Juniel presents her listeners with a brand new flavour that is both enigmatic and alluring. An unexpected twist in music style, “Last Carnival” stands as a testament to Juniel’s flexibility as a singer and composer. More than just vocals, she is slowly paving her way as a musician worthy of our respect.

Kassy has appeared on Unpretty Rapstar, making a name as a rapper more so than a singer. “Let It Rain” overturns that image and introduces us to the sweetness of her voice. “Let It Rain” is a classic ballad, soaking us with melancholy. The lyrics are beautiful in describing the melancholy attached to missing someone:

The emptiness that she speaks of is a familiar feeling for many, making the song even more appealing. Rather than being melodramatic in her expression of sadness, she connects with a nostalgia of past love. Poignant and personal, Kassy has found a way into the hearts and memories of listeners.

Youngji is more well-known for her appearances on variety shows than her abilities as a singer. Her solo debut this time with “Memory Clock” proves to us that she is truly more than just a television personality. The song brings us down a path of reminiscing, engaging in a conversation with the self. Easily dismissed as just another ballad, it is surprising how personal the story to the song is.

Speaking about loneliness, it strays away from the typical love song. Rather, the song is a letter to oneself. In the MV, Youngji is wearing a school uniform as she explores a peaceful home and writes a letter that she hides in a teapot. Later in the MV, we see an older Youngji recall her younger self’s actions and she finds comfort in reading the letter by her younger self. The simple narrative is deeply moving because it reminds us how we are never truly solitary. Youngji’s “Memory Clock” delivers a comforting message in a direct and embracing manner: the way of finding ourselves is through ourselves and oftentimes we can be our own guides in times of loneliness.

Riding on the tail-end of the summer K-pop wave, Jellyfish Entertainment has debuted Gugudan’s two youngest members in the group’s first sub-unit, Gugudan Ogu Ogu. The group name references an expression used on something adorable, often a young child. Befitting the sub-unit’s name and the members’ young age, “Ice Chu” is underpinned by colourful visuals and a cute concept of an ice cream planet populated by walking desserts.

While the MV may give off Orange Caramel vibes at first glance, it is not a mere concept copycat. It feels younger, more childishly whimsical, but with a playfully sinister twist. Hyeyeon and Mina don’t just dance or prance around this candyland, but wreak havoc by munching on unsuspecting passers-by, bully an ice cream by throwing his ice cream on the floor (don’t even ask about this cannibalistic logic), and then tossing his baby back and forth before accidentally dropping it. The baby is resuscitated, only to be electrocuted by the meddling girls. It’s a hoot to watch, and the punitive ending for the pair of dessert-terrorising delinquents is a delight.

The song is buoyed by energetic delivery and upbeat but not overly crowded instrumentals, and a brassy instrumental carries the catchy chorus. The result is a fresh and cute summer bop that’s fun without being overly saccharine and cloying, and a perfect conceptual and musical fit for Gugudan’s maknaes.

[The review on Gugudan Ogu Ogu’s “Ice Chu” was written by Qing.] 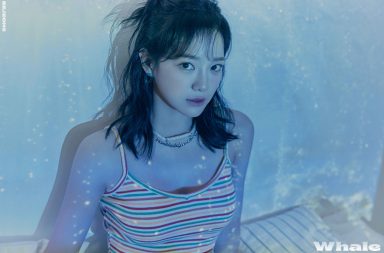