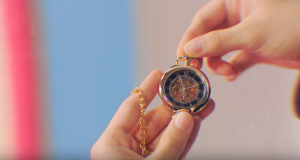 Time is an important concept in life because it is irreversible and finite, much to our dismay. From dawn till dusk, this priceless commodity is constantly flying by without taking a breather. It seems like Good Day understands the beauty of time as they’re armed with three units to illustrate the different parts of a day – Good Morning, Good Night and Midnight.

C9 Entertainment, notably home to Wanna One’s Bae Jinyoung, started dropping teasers for their upcoming 10-membered girl group in early July. Though new to the scene, they’ve received exceptional attention for featuring the popular boy group member in their MV, but there are downsides to this.

Right off the bat, it’s evident that Bae Jinyoung is the star of the MV. He has more screen time than some of the members and his face is even used for the thumbnails of both teaser and actual MV. It’s excusable if they’re just making good use of his star power to bring in publicity because Momoland also featured Wanna One’s Jaehwan in their “Freeze” MV to garner attention, but was it necessary to go to such extent to attract viewers? Whether it’s a trend nowadays or just a cheap and easy marketing ploy, a line has to be drawn. By blatantly focusing more on Jinyoung, the strengths of Good Day don’t shine through in the underwhelming screen time they have for their own debut MV.

Stuffed with brass, “Rolly” off their first mini album All Day Good Day takes on a ’50s spin together with an upbeat melody and a catchy hook. Its repetitive use of “rolly rolly rolly roo” in every chorus is a smart move in hooking the listeners. But it does bring to mind Pentagon’s attempt at the ‘50s rock-and-roll phenomenon with “Critical Beauty”. Though “Rolly” draws strength from its riveting hook, the piece still doesn’t feel developed enough and a stronger chorus would have better sealed the deal.

C9 Entertainment is a company that puts great emphasis on their vocal ability as it houses artist like Jung Joon-young and Yoon-ha, and I’d say that “Rolly” serves as a fair debut track to showcase Good Day’s vocals. The vocalists are given ample opportunity to strut their high notes and upper registers. That said, some might find their high-pitched squeals too much and cloying, if anything.

Another thing that I’m ambivalent about would be their outfits. Colours play a prominent role in invoking associations with certain feelings. While some groups have chosen to tackle the fairy-like pastel concept and some with the minimalistic black and white concept, Good Day has embarked on an unusual route, donned in pink sequins from top to bottom.

The real weakness of the debut shows most clearly in the unfulfilled narrative of the MV. We see the pocket watch being the main focus: it possesses the power to transport Jinyoung into another realm, dimming the lights before encountering the girls. While that itself is a compelling theme that hints at potential for further development, the inconsistency of the MV makes it obvious that there were various themes they had in mind but none came to fruition.

In the beginning, we see an introductory clip reflective of Good Day’s three units. Good Morning comprises of bright hues for a fresh awakening, then things start to wind down with a cozy girls’ night in for Good Night, while Midnight features a dreamy visual spectacle, symbolizing that the night is still young. Though there were some references made to the theme of time given the filler and cutaway shots of the clocks, the MV fell short in connecting the different concepts seamlessly. The lack of cohesiveness makes it almost impossible for the viewers to realize that Good Day is actually made up of three different units, if they hadn’t known beforehand. 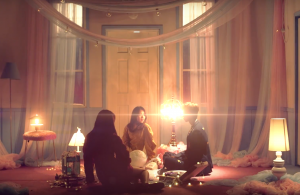 Besides the scenes with Jinyoung, the interspersing scenes of the girls engaging in several activities and individual shots of them smiling at the camera, what particularly intrigued me was the scene of the girls and Jinyoung playing with glitter tarot cards, but it was more of a touch and go. If the company had planned on emphasizing on their various concepts, they could have better leveraged on the existing scenes to portray the stark differences of the units and their concepts. With so much narrative focus on the male lead, the girls come up short and lack presence in their debut MV.

The dance for “Rolly” is also remarkably insipid – nothing out of the ordinary, further jeopardized by the disjointedness of the MV. Prior to their debut, they’ve been uploading dance covers on C9 Entertainment’s YouTube page and the covers do a much better job in showcasing their dance abilities. If they could just produce a better song with a punchier choreography for their next comeback, they could just make a name for themselves.

Whether “Rolly” is a notable debut song is truly uncertain. It’s cute — refreshing even — but sadly lacks staying power. Both track and the wishy-washy MV don’t offer much novelty or give sufficient justice to the girls’ promising b-sides in All Day Good Day. I look forward to the execution of the different units and just hope that the girls would offer us something to hit home in the near future.