SNSD's “All Night” is Everything that “Holiday” Should Have Been 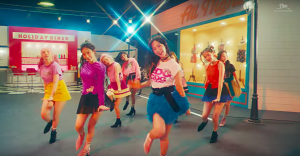 SNSD has come back with two songs around similar topics– relaxing, partying and enjoying special moments. But while there are two tracks, they are far from equal; and where “Holiday” feels like a poor attempt to parody the past, “All night” shows SNSD can deliver quality, not just quantity.

“Holiday” supposedly harkens back to SNSD’s previous tracks, but to me, it just feels like the producers were lazy. This was especially made clear in how the theme was realised; as the title is in English, there are immediate connotations for English speakers of travel, relaxation and holiday activities, but the visuals don’t match. Likewise the lyrics continually mention the word “holiday” which appears to refer to a special moment or an exciting night, whereas in Australia at least, we would think of a holiday as a longer length of time. For me at least, I would say “public holiday” to denote a single day, as opposed to a period of time, therefore in my mind there is discord between the lyrics, theme and title. You can connect the lyrics to SNSD and their history if you force it, but it’s a tenuous link at best. 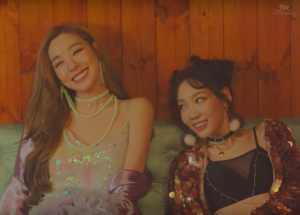 Without this connection (and honestly, even with it) the song feels empty of meaning. The members don’t do much in the MV, and when they do, like trying on clothes or ordering a milkshake, it’s brief, perfunctory and meaningless. Likewise, the emotion is upbeat, but for whatever reason, I simply don’t buy it — it feels artificial in a way that “All night” doesn’t. Perhaps it’s because of the fact that this is the kind of track SNSD have released before, with a slightly different flavour.

In contrast, the lyrics of “All night” work well with the title and have more variety. I will say “All night” does, on occasion, have some incredibly weird key lines. “I like to party!” at the start sounds ridiculously high pitched and nearly stopped me from taking the song seriously. It’s at odds with the more mature vibe in the rest of the MV. Likewise, “Just drop it on the floor” showed a stunning lack of cultural understanding around the meaning and use of the lyrics. Instead of being energetic and intense, I winced to hear Hyoyeon deliver this line in the most soullessly robotic and detached voice possible.

Aside from that, lyrics talking about falling in love, being excited and most of all, “I just smiled too, smile together” really fit the ambiance and felt so genuine. “All night” focused on individuals, with plenty of close ups showing SNSD smiling believably. The documentary version also gave SNSD the ability to express themselves, which again added to the growth and maturity we were able to see in “All night”. 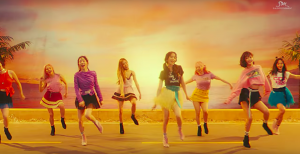 Visually, I had the same problems; “Holiday” seemed fake and cheap, while “All night” felt like a simple theme done well. I’m going to make the call: fire the coordinator in charge of the “Holiday” MV’s costumes. The problem is, they look downright awful. Even when they have individual costumes, they look uniformly tacky. You can’t tell me no one could find a better top for poor Taeyeon, or better top to bottom matches in general. It takes genuine purpose to make a group as attractive as SNSD look bad, and SM has somehow managed that.

Yes, yes, the costumes, like the set, are a throwback. But why? Why this song? What’s the purpose? Unlike the clear 80s vibe in “All night”, these costumes just appear to be a mish-mash of clothing. What’s more, they don’t contribute to the theme; if you were going to do this (and it’s a good idea), then use it for a song which describes the past, or memories. It’s especially odd when considering the documentary sections for “All night”– why, oh why not make it a meaningful track to the fans and use it to reflect on SNSD’s history and the highs and lows of fame? Again SM, it takes effort to take something with so much meaning, and somehow reduce it to so little. 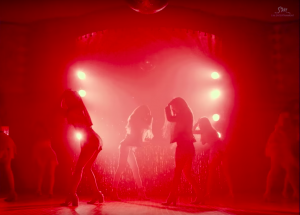 Also, and this is a contentious topic, in my opinion, it does make SNSD look like they’re trying too hard. With Twice hot on their heels, I can see why SM may consider trying to remind fans that SNSD are the original queens of aegyo, cuteness and peppy hits. But SNSD have grown past this, and moved beyond this. It’s not that they can’t do it, but they deserve to be able to do it properly. They can do fun and youthful concepts without forcing it in a way that is honestly tacky, and demonstrate this perfectly well in “All night”.

Perhaps one could argue that the set choice in “Holiday” is deliberate, but it feels like there’s too much cohesion for it to be artsy and random, but not enough cohesion between the different backdrops to look like someone bothered. The gold on stage was pretty, but it wasn’t enough to salvage the missing depth. Combining previous sets could absolutely have been done more effectively and meaningfully. 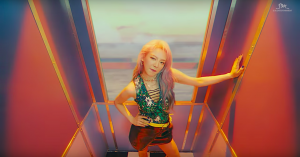 “All night” on the other hand, has a clearly linked visual of a disco, or old-school formal. All of the scenes are linked — stage, hall, bathroom, with appropriate tinsel and glitter backdrops. It’s simple, it’s easy, it’s cheap, but they’ve done it well. Likewise the costumes: here they’ve gone with an 80s inspired theme, but each choice is flattering for SNSD members instead of garish. More than that, they’re believable, and SNSD look comfortable and believable in them.

Musically, “Holiday” just feels kind of generic. You could blur this track fairly seamlessly into “Party” or any number of other songs (and I saw someone comment online it had a bit of a Sistar vibe to it). Everything from the background music to the singing style seems a bit tired and bland. You also have to worry when Hyoyeon’s rap is the best part of the song, which in my opinion, it is. Don’t get me wrong, Hyoyeon is my bias, but she’s not the strongest rapper ever or the most talented singer. Here unfortunately it’s hard to tell if her section is fantastic, or the rest is just a bit monotonous. 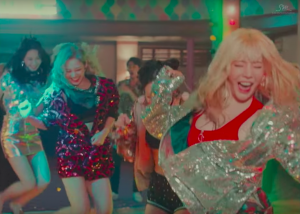 The dance was a focal point of “Holiday”, but the moves were uninspired. For those hoping for another strong and unique “I Got a Boy” style choreo, “Holiday” is a disappointment. The moves sometimes seemed a little odd, like bending over at 0:51 in the video below. As the set is shallow and the girls don’t really show much personality, it makes the weakness of the dance all the more obvious. In “All night”, the dance wasn’t so much of a focal point and the snatches of group dancing were almost irrelevant. This also contributed to a much stronger feeling of focusing on the individual, as we got to see more individual members dancing rather than the feel of a single coordinated choreography.

“All night” is not breaking any records in terms of unique musicality, but it is a slightly different sound and feel for SNSD. The retro feel is something SNSD have played around with before, but I quite like the chorus with a beat that wouldn’t be out of place in a nightclub. Again, this matched so well; the retro feel with the costumes and visuals, the clubbing sound with the lyrics and the title. 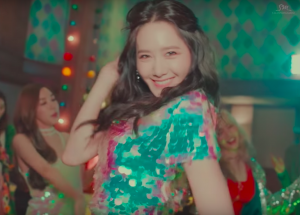 My conclusion has been pretty unmissable; “All night” is by far superior to “Holiday” in my opinion. The idea of harking back to SNSD’s past was a missed opportunity for something really special and meaningful, and I hope they will be able to touch on it properly in the future.