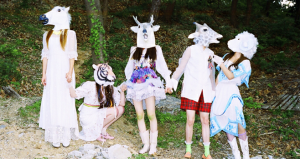 After a long break, the five girls of f(x) are back with a new mini-album and promotional track, both titled Electric Shock. Just like the title implies, the song itself is a fun little dance track with a lot of electronica, mind-numbing synths and a splash of dubstep. The song follows the electropop concept the girls have been sticking with since “Nu ABO,” and although it can be a little grating on the nerves, due to the excessive amount of autotune and voice distortion, it’s a fairly decent track. However the girls’ concept photos don’t really match together with the sound of the song; they look like the cover of a deranged children’s book. SM doesn’t seem too keen on continuity nowadays, but regardless, with the song’s vibrant and irritatingly fun vibe, the MV is guaranteed to mirror “Electric Shock.” 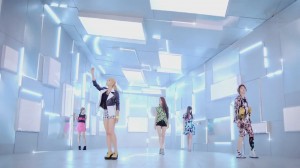 It seems that the ubitiquous SM box has recieved another upgrade. Although the girls are still just dancing inside of a box, no matter how cool it looks, there is a lot of interesting elements to it that provide a lot of depth and eye candy.

The use of strobe lights within the walls gave the impression of it being the lines inside of a heart monitor, which coincided with the electric shock theme–note the defibrillators– and was a nice touch. The lights were absolutely gorgeous against the light blue room and gave it a lot more of a tranquil feel, in light of the rave show going on in the pink room.

Seeing as there was some, but not much, dubstep, the use of rave lights were a bit much, but was fitting with the music. The three separate rooms were used accordingly to the level of intensity of the music: pink for high, blue for medium, and grey for low. The pink room is where a lot of the choreography was held, and is the most fun-looking of the three rooms. The colors constantly change between pink, purple, and black, and the jungle gym-esque block tower gave the room a lot more depth and was an interesting addition. The floor looked like it was ripped right out of TRON: Legacy, but was cohesive with the rest of the room. The grey and blue rooms weren’t as interesting as the pink room but they gave the eyes a break after the bright pink and purples off the pink room and yet still accentuated the harshness of the girls’ clothing. The darker parts of the pink room help to tone down their colours of their outfits, but the other rooms weren’t forgiving on the eyes.

Speaking of the girls’ attire, the use of circle lenses — although insanely creepy — fit the Electric Shock theme and made the girls look they had put their fingers into sockets, 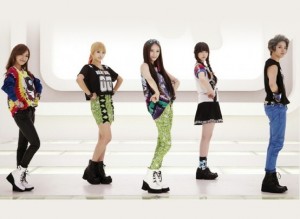 and their outfits didn’t follow a certain theme and although they are hideous-looking, randomness in apparel is nothing new for f(x). The standout in the MV is Sulli, who looks gorgeous in long brown hair (let’s pretend that spider afro in “Nu ABO” never happened) and a nod should be given to Victoria, who pulls off blonde well, or it could be just the lighting in the rooms. The constant close-up shots with the girls became repetitive and unpleasant when they were holding up things that can emit an electric shock.

The only main gripe I have with this MV is that f(x) doesn’t seem to be developing musically and conceptually. Their concepts seem to be following the same trend of flashy, and mindless fun, and its like they’re beating this theme to death. It’s nice to have your own unique concept, but a lack of change would create a feeling of redundancy. The choreography during the MV was disappointing, and although the MV’s cinetamography was well-done, it still was all flash and no substance. It would be nice if SM could invest some time and effort into making interesting plot-lines for the MVs and some more creative and interesting sets that aren’t extensions or visual upgrades of a box.

Overall, the MV was nice to look at, even with the flashy lights, but didn’t really leave a strong impression. Even though it was an extravagant-looking MV, it didn’t really have anything going for it except for its looks. I’ll be waiting for the day when f(x) comes out with a title track  that shows a new side to them and an MV that is just as intellectually stimulating as it is a visual treat.