A Reasonable Nite Out With The Boyz

Multi-act concerts serve many purposes for K-pop lovers. They help introduce rookie acts to the crowd and allow slightly established acts to hold mini-concerts without needing too much of a back catalogue. To cap it all off, the event will always be highlighted by a really big name, thus helping to ensure the crowds and that the event would be worth watching.

A good example of the above would have to be the “Boyz Nite Out” mini-concert held in Singapore. For me, it was a good chance to get acquainted with 7942, check out B1A4 and Teen Top in a live setting, and appreciate a SHINee live performance again. That 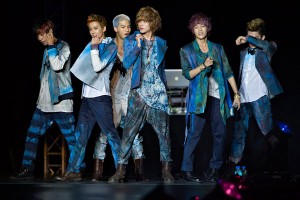 Jay Park was also in certainly did not hurt. Putting aside slightly lacking attendance (there were distinct empty sections in the stadium) and a hopelessly boomy sound system,  here were my takes on the performances.

Teen Top started off the night with their latest single To You, before moving on to a few interactions with the crowd, not going much beyond the usual “I Love Yous” and “Singapore is really nice” statements. They however did manage to excite the crowd by the time they got to their more popular songs like “No More Perfume On You” (which they billed as their sexy song) and “Crazy,” in which they moved around the stage to move closer to fans. Despite that, they still came across as about average, partly due to their group dynamic, where it always appeared Niel was dominating proceedings.

For fun factor though, B1A4 definitely turned things up a notch, beginning with that guilty pleasure of mine, “Beautiful Target,” before moving on to “Baby I’m Sorry,” which they did not need to  apologise for, and completing their first half with their ballad “Only Learned The Bad Things.” The highlight of their appearance though, was a special birthday celebration for CNU, where 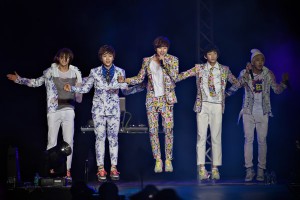 he crowd sang a birthday song for him, with his fan club preparing him a self-made scrapbook with quotes and photos.

Visibly touched, CNU then proceeded to thank the crowds for their gesture, and made a few wishes, including to marry a Singaporean as well as for lasting fan support. As corny as the lines were, they did get the crowds cheering again, before they ended on a high note with their newest song “Baby Good Night,” as well as the old favourite “OK Go,” complete with whoops and cheers to pump up the crowd. Then as a final flourish, as they left the stage, they sang a little ditty to express their love for the crowd.

I would admit to not having heard much of 7942, and the crowd probably had not either, but still it was very nice of them to show their support for them. Dressed in simpler shirt-trouser outfits, they gave off more of a ballad-esque, 2AM feel, and certainly did the part with their debut song “I’ll Be Famous,” as well as a drama OST called  (the) “More I See You.” Being new though, they struggled a little with fan interactions, not saying much beyond being happy to 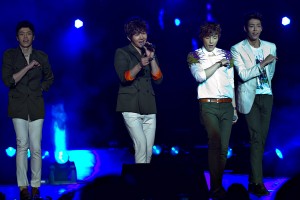 have Singapore as their first ever foreign stop.

To their credit though, they did try to show a versatile approach to singing, as well as overcome the issue of having a limited back catalogue, with a medley of ballads and up tempo tracks. The medley also served as a nice opportunity for them to move about the stage and increase fan interactions, given how some of the songs were recognisable hits from SG Wannabe and Kim Tae Woo.

Once the event passed its mid-point though, it was when the bigger acts began coming out, with Jay Park performing his latest hit “Know Your Name” right off the bat, complete with his crew of back up dancers, before acknowledging the crowd and talking about his recent activities. He then followed up with another song off the same album, “Got Your Back.”

Jay Park was one of the better acts at fan interactions, and coupled with his fluent English, he certainly did well to work up the crowd further. From witty introductions to his songs (a good example would be “I traveled a lot looking for Beautiful Girls”) to 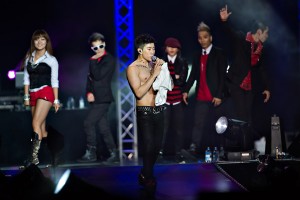 actively moving toward the front of the stage and posing for fans, there was not much he did not do to please concert-goers.

The highlight was probably the later parts, where he performed a few songs off his English mixtape. Despite my reservations about the lyrical quality of the mixtape, and yes he did self-censor some of the more explicit bits, his final performance of BODY2BODY was certainly interesting to watch, given how the song played to his strengths and let him indulge in a bit more fan service, with him taking off his t-shirt and giving fans some eye-candy to check out.

The last act, and undoubtedly the one most had been waiting for, was SHINee, and they certainly wasted little time in giving the fans what they wanted, launching straight into a medley of fan favourites including “Replay,” “Ring Ding Dong” and “Lucifer.” Not only were they able to get a quick (and resounding) response, the fan favourites also showed off their strong showmanship nicely, with them executing the complicated choreography pretty well and making the best out of the poor sound system.

They then took a short pause to acknowledge the crowd and reminisced about their own concert held in the same, as well as 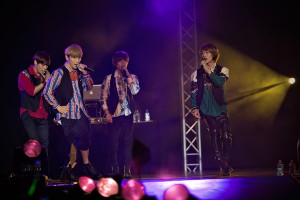 explain Minho’s absence from the event (other commitments was the reason given), before an interlude which helped introduce their newer, more electronic sounds from their latest album, Sherlock. And then as a swansong for the night, they performed two singles off that album, the title track and “Stranger.”

The event then rounded off to a very low key ending, with every performer called back to the stage to say a final round of thanks and acknowledgement to the crowd.

Summing up, despite the event being marred by weak attendance (there definitely could not have been more than two thousand people in the crowd) and a sound system that did few performers justice, with them being forced to sing above the backing track, I did come out of the event with some positive impressions. There were enjoyable acts at the end of the day, and there too were those that impressed in spite of the conditions.