A Build Up of Epic Proportions: Bridal Mask Eps 1-6

Bridal Mask — or in Korean, Gaksital — is a period drama set in 1930s Korea during the Japanese occupation. The drama is an adaptation of the manhwa by Huh Young-man chronicling the adventures of a Korean freedom fighter during this era.

Also just as a warning, there are spoilers ahead. 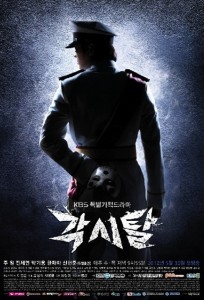 The first six episodes of this drama serve as the prologue; it explores all the events that built up to make our hero…the hero. In fact, in the first six episodes Lee Kang-to (Joo Won) was not the gallant protagonist. Instead he is loud, brutish, and to be honest, quite the douchebag. Kang-to is a Korean with allegiance to the Japanese Empire and has a distaste for the patriotic freedom fighters. His biggest obstacle comes in the form of a freedom fighting vigilante, Gaksital, who dons a rosy cheeked bridal mask. He is determined to catch Gaksital and is willing to torture his fellow countrymen in order to do so.

However, the very man he vowed to catch is Kang-to’s mentally retarded brother, Lee Kang-san (Shin Hyun-joon) who isn’t actually crazy. He only pretends to be in order to protect his true identity as Gaksital, and this provides for a lot of heartbreak. Even more ironic is the fact that Kang-to’s drive to succeed in his job is fueled by his desire to help his brother get treatment. To add to his troubles, he has to deal with a spunky and gutsy female lead who also happens to hate his guts. Mok Dan (Jin Se-yeon) made it her goal to fight the current regime and it doesn’t help that she is the daughter of a prolific leader of the independence movement, Dam Sa-ri. She is used by Kang-to as bait to catch Gaksital and has been repeatedly tortured and beaten. To add to the angst, she is Kang-to’s first love and he hers. Cue the angst ridden love.

Episode 6 was by far the most heart-wrenching episode, but it was crucial for Lee Kang-to’s transformation into the Gaksital. It is fairly obvious that Kang-to would be the last person who would fight for Korean independence, even though both his father and brother sacrificed their life for it. In fact, that is the very reason he detests the patriotic movement. It broke apart his family and the people he loved. So there needed to be something dramatic and absolutely life changing that had to happen, and boy did it. 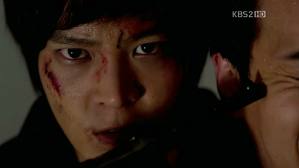 I love how the writers aren’t afraid to get gritty with the plot. The fact that Kang-to shot his own brother was a brilliant move and finding out that he was Gaksital right after was even better. Nothing is sugar coated here and you get the hard core angst. This drama is filled with heart wrenching movements and it has me completely interested and on the edge of my seat. As the series progresses, I hope that Kang-to learns to embrace the role of the Bridal Mask not for revenge but as a vehicle for freedom. The hero needs his faith in the government to be completely shattered and it seems that the betrayal of his father will be that tipping point. The character won’t be able to continue his stint as the Gaksital based purely on revenge, and I’m looking forward to seeing Lee Kang-to’s evolution into this role.

Also a note, Joo Won is doing a fine job of being Kang-to but can we please take the yelling down a notch? Every time he bursts onto the screen screaming like he’s being skinned alive I just whisper in my teacher voice “Let’s use my inside voices kids, inside voices.” But I digress.

Some have said that Bridal Mask is like a 1930’s City Hunter, and they aren’t too far off. Barring the salmon colored skinny jeans, Bridal Mask has the Council of Five who betrayed the hero’s father, an unidentifiable vigilante, and a spunky heroine much like last year’s City Hunter. However, this drama I find is darker and more tragic. 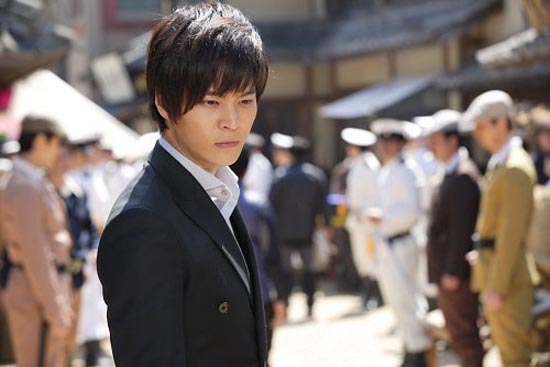 While the main characters are fantastically flawed and intricate, the minor characters Shunji Kimura (Park Ki-woong) and Ueno Rie (Han Chae-ah) are starting to catch my eye. Shunji is Japanese born with a fondness for Korea; he is also a skilled martial artist who is the son of Chief Kimura. Shunji serves as the perfect foil for our main hero and let’s be real here; it’s Park Ki-woong. What’s not to love? Ueno Rie is a Korean born who hates her motherland but is a cold blooded bad ass. While Mok Dan is gutsy, she’s very pure as a heroine. Ueno is her foil, a woman with hatred towards her mother country and cold.

The only bone I have to pick with this drama is the ridiculous love polygon that is set up. Mok Dan is somehow the first loves of both Shunji and Kang-to while Ueno seems to have fond memories of our hero. I find this complex four way relationship they all have with each other wholly unnecessary; the drama already has enough intricacies and complexities that a tangled love web is not needed. The main couple’s love is already screwed up, why do we need to add love rivals? This kind of love polygon should be used for a light fluffy romantic comedy, not a period action thriller.

Bridal Mask is a rich, period piece with plenty of action and emotional value. It’s fast paced and addictive and I definitely recommend it to anyone. However, prepare yourself for a lot of tears and screaming at the computer.

What are your thoughts? Are you as addicted as I am or are the other dramas catching your eye? Leave your comments below!