Awkward moments are no strangers to K-pop. These go together like peanut butter and jelly. In other words without awkward there would be no K-pop that we know and love.

So without further ado, I present you with another installment of awkward moments in K-pop.

That awkward moment when you know this commercial was made to advertise by emphasizing KARA’s “assets.” KARA recently did a Japanese snack commercial where they danced to their new Japanese song “Speed Up.” The CF is based on a line of healthy option low calorie snacks distributed by Otsuka Pharmaceutical. The commercial debuted during a press conference on April 10th to launch the health snack.

Leave it to Japanese commercials to go the unconventional route. As if it wasn’t obvious enough, this commercial had two emphases; the snack they’re selling and KARA’s butts. It’s funny how they found it necessary to use slow-mo cam only on the “money shots.” Shameless and innovative at the same time.

Bonus: In the 2nd commercial Nicole was transformed into a different version of herself. The camera goes from one member of KARA to the next (as would any regular KARA music video) but the audience is surprised by a much larger Nicole. This one is called the “Obese KARA” edition. Oh, Japan!

That awkward moment when Xiumin doesn’t know what to say. Poor Xiumin, I feel for him. He’s in a foreign country surrounded by a language he clearly can’t speak, but giggling won’t take the focus off you. When asked to describe their latest music video “MAMA” Xiumin was left speechless. He even tried to giggle his way out of it, but to no avail. We’ve all had those moments where we don’t know what the person said but we just smile or laugh and hope they don’t catch on. Too bad it didn’t end up that way for Xiumin. The poor boy was trapped with nowhere to hide and none of his members willing to bail him out. After the interviewer felt she could take the awkwardness no longer she quickly shifted gears to the next question. 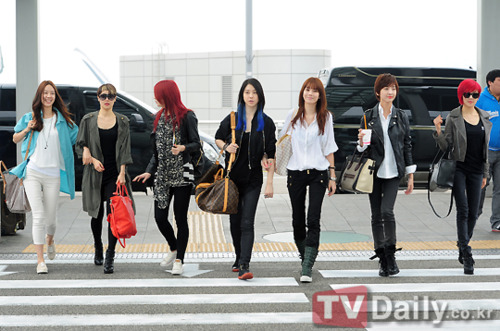 That awkward moment when you ask fans to name a new girl group and it doesn’t go as planned. CCM is in the process of launching their new girl group and T-ARA asked fans to suggest possible names for the impending group. Well, it seems to have sprung creativity taken a turn for the worst as people are using this as a platform to show their disgust toward CCM and its CEO. Some of these names and explanations are brilliant, but unfortunately these girls are on the receiving end of the backlash without even being showcased yet. Some group name ideas:

“Titanic – because it’s a sinking ship with CCM”

I bet they didn’t see that coming.

That awkward moment when Yonghwa tries to be cool. I’m going to give Yonghwa credit. He is a talented musician that seems down-to-earth and really funny. I like that he didn’t shy away from speaking to a foreigner, but man was he awkward in this video. In his attempt to look cool he looked… When trying to imitate the American accent I like how it turned him into a rapper. What is up with the hand movements? My favorite part though is when he got some confidence and got a little too excited. He started naming foods he wanted to eat and ended up looking like a crazy person.  “A” for effort, but “F” for execution. On the bright side Yonghwa, your English accent is near perfect.

Have you spotted any awkward moments lately?