Doing Fine on Their Own: JYP and Ga-in Don't Need "Someone Else" 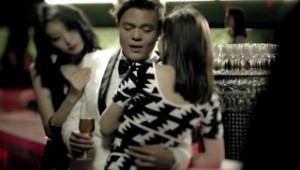 Many newer fans of K-pop are unfamiliar with J.Y. Park as anything other than the maverick figurehead of JYP, so before we address his most recent material, let’s take a quick look at his history as an artist and producer:

J.Y. Park first debuted unsuccessfully with the band Park Jin-young and the New Generation, and again as a solo singer in 1994 with the much more recognised Blue City album. He went on to release six more albums and an EP up until 2009 which included smash hit singles such as “Honey” — which wouldn’t sound out of place in a Korean version of Grease — which was also at the start of the Wonder Girls‘ “Nobody.” He has also produced music for many of the JYP artists such as Rain, Wonder Girls, 2PM and miss A — not to mention Will Smith. Suffice to say, he has some serious performing and music credentials, and has garnered a lot of expectation for this comeback.

“Someone Else” is a duet with Ga-in of the Brown Eyed Girls. Some people have voiced surprise over the choice; it might have been easy and even cheaper to take a JYP member. However she’s a wise choice: not only do their vocals work perfectly together, but she also brings a certain prestige to the production, not to mention they have some serious chemistry. They also have a connection via We Got Married, in which Ga-in admitted she was a big J.Y. Park fan.

It’s a genuinely beautiful song, laid back but not lacking in passion and while it doesn’t have the world’s catchiest hook, the song is easy to listen to on repeat. There’s also a class and style to it that makes it distinctive. There is no awkward rap break, no strained vocals, no appalling Engrish; it’s just a smooth R&B ballad of excellent quality.

The MV tracks the story of two people, who due to the fact the man is a celebrity, can’t be together. Ga-in’s character finds comfort in the arms of another while J.Y. Park heads to the bar to find a distraction from thoughts of her. But neither of them can forget each other, and so she leaves her lover’s bed and heads back to J.Y. Park’s apartment. It’s not clear if she is simply getting away from the other man or going to see him, but J.Y. Park realises that no amount of willing groupies will ever make up for her and returns to the same flat. The music break allows us to hear his footfalls as he notices the door is ajar, and then starts again as he sees her and she approaches him to… slap him? Kiss him? We don’t yet know as the camera cuts to Ga-in and J.Y. Park dancing. The dancing is interspersed with close-ups of the couple’s faces as they realise their need for the other. Finally he slips a ring off her finger and they clasp hands, holding each other tight. Whether the removal of the ring is freeing her from the man we saw her with earlier or J.Y. Park is up for speculation. But there is a certain bittersweet quality to the ending, a sense of finality that could well mean a goodbye scene.

The colour palette and lighting in this MV stayed very neutral, perfectly suiting the song. The flats and even the club seemed Spartan, devoid of much warmth. The dance sequence was filmed practically in black and white which meant the emphasis was on the dancing and the intensity between them. The dancing was sensuous without being raunchy or sexualized and while the dance wasn’t hugely complicated, the ability of both Ga-in and J.Y. Park gave it a slick, professional feel. 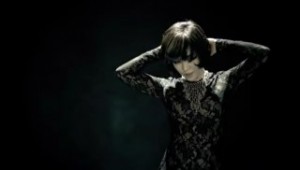 Similarly, their wardrobes are almost completely monochrome. I’ve had a beef with monochrome in the past, but here it seems totally appropriate. All right, J.Y. Park seems a little overdressed for a club in a white blazer suit and dickey bow but in all honestly he pulls it off pretty well. Ga-in looks lovely in a slinky black silk nightdress and a trench coat. Trench coats seem to be becoming a thing of hers, as she wore one during the “Sixth Sense”  promotions and has in several photoshoots; she works them so well. Her short bob, paired with clear skin and pale lips makes her look quite old, but then again considering J.Y. Park was born in ’72 and Ga-in in ’87 she probably should. That said, her eyes are beautifully smoky, again echoing her “Sixth Sense” look. Her lace dress and ornate necklace for the dancing calls to mind miss A’s “Touch” dresses. J.Y. Park’s black suit in this sequence wasn’t brilliantly cut, and the tie looked cheap. Despite that, both of them could move well and his hair was really nice.

Emotionally the MV has the potential to pack quite the punch: here are to people who can’t be together, who need to be together. The fact the media and the public so often get between celebrities and their love lives is something I would have liked to see a little more of in this MV; the slow motion shots, the corridor, the lingering glances were all things that got a little excessive and melodramatic, so I struggled to feel much sympathy or delight at the end. While neither is a bad actor, they aren’t quite good enough to carry the kind of emotion required. What might have been better would have been to use actual actors and give Ga-in and J.Y. Park more dance time, as there was real potential there and it would be interesting to see if that chemistry translates well onstage.

In summary, it’s a strong comeback, and it’s not just me that thinks that: the song has reached #1 on Bugs and ranks high on Melon and Cyworld. As a newly converted fan of J.Y. Park I would love to see some more of him, and as a long-standing fan of Ga-in another collaboration would be equally welcomed.

Due to a slow, slightly melodramatic plot but subtly beautiful visuals and a good performance from both idols, the MV rating is 3.5/5.

What did you think of the MV?