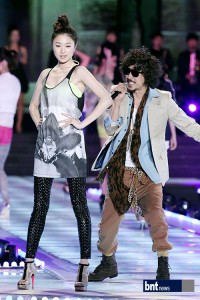 Last week the first ever K-pop Concert and Fashion Show pairing in South Korea took place at the Olympic Park Gymnastics Arena in Seoul. The event, K-Collection in Seoul, featured performances from today’s top idol groups like the recently returned Big Bang, as well as Girls’ Generation, IU, T-ara, MBLAQ, Infinite, Miss A, Nine Muses, Tiger JK & Secret. Not only did some of these groups perform, but a number of the idols also walked the runway in some of the featured brands like 8 Seconds, Kappa and Style Nanda–among others. Idols weren’t the only ones getting in on the action, as there were also actors and actresses, a sports personality and former supermodels making appearances.  This type of hybrid event is similar to events like the old VH1 Fashion Rocks Concert, or segments of the Victoria’s Secret Fashion Show that features artists performing their hit tracks while models show off the latest fashions. It was also intended to highlight designs from smaller Korean brands that are often overshadowed in the domestic fashion industry. While it would have been nice to see notable K-pop fashion icons like G-Dragon and T.O.P. or some of the model-esque beauties of SNSD like Sooyoung or Yoona hit the runway, fans were able to see quite a few K-pop stars take part in all aspects of the show. Let’s take a look at some of the different styles that were showcased at the event, and who got the best looks to model! 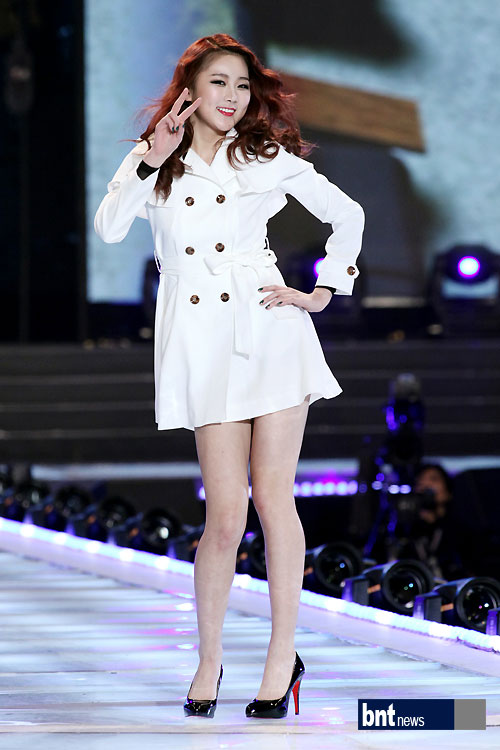 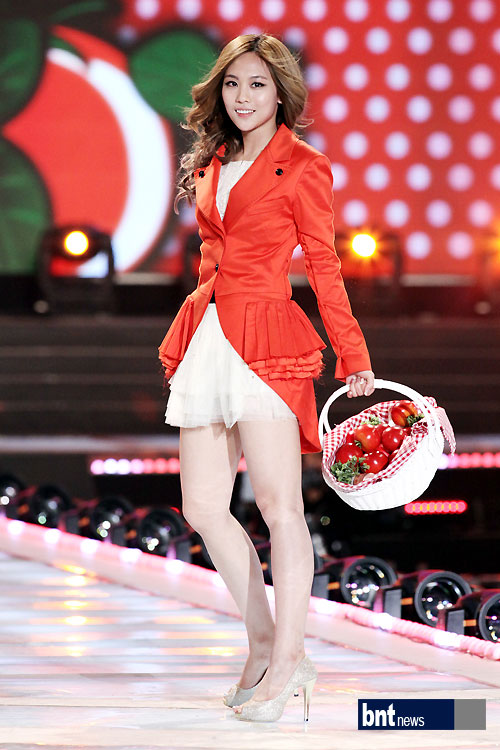 Men always make the best of athletic wear, and who better to model pieces from Kappa than 2AM‘s beastly Seulong and former Korean basketball pro Woo Ji-won? The brightly colored getup sported by the baller is definitely funky and fun, but Seulong sure looks sleek in his simple look. You can definitely tell it isn’t his first trip down the runway with that “Blue Steel” gaze. 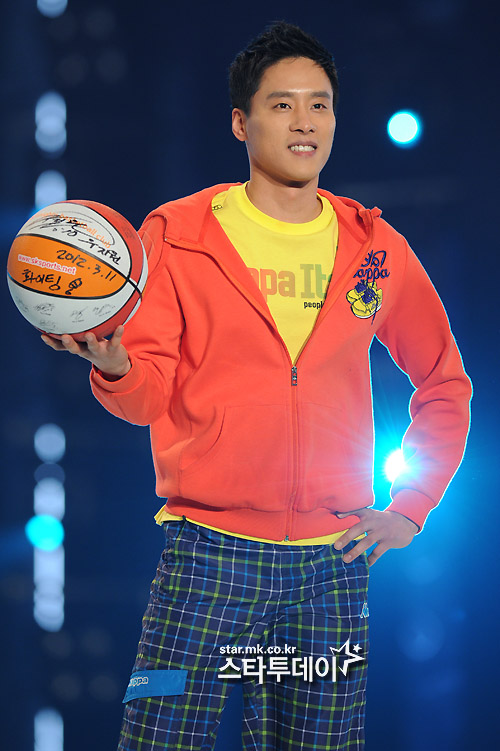 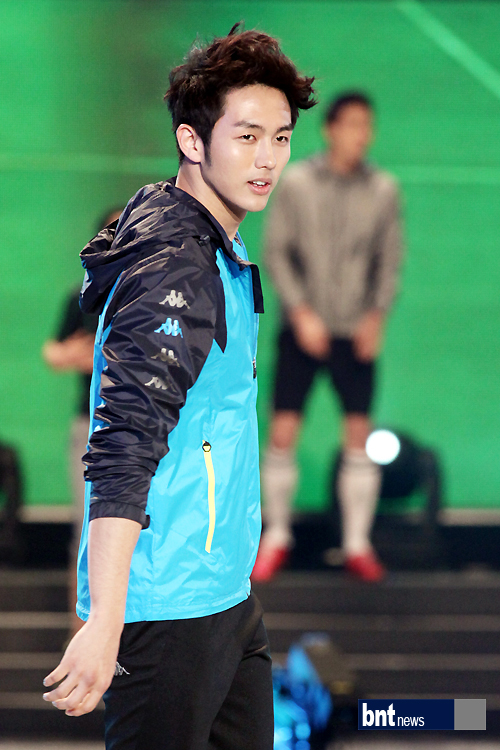 T-ara and Secret both performed at the event, and a member from each group also served as models. Hyomin and Sunhwa wore different takes on the vest, with Sunhwa in an over-sized piece with coordinating leggings and Hyomin in a cropped cream one over a short, but flowing black dress. Hyomin looks perfectly cute for a Spring date in IPPNGIRL, and I can’t decide if Sunhwa’s sack-like look from 2PLACEBO is actually just fancy pajamas. Are those slippers? 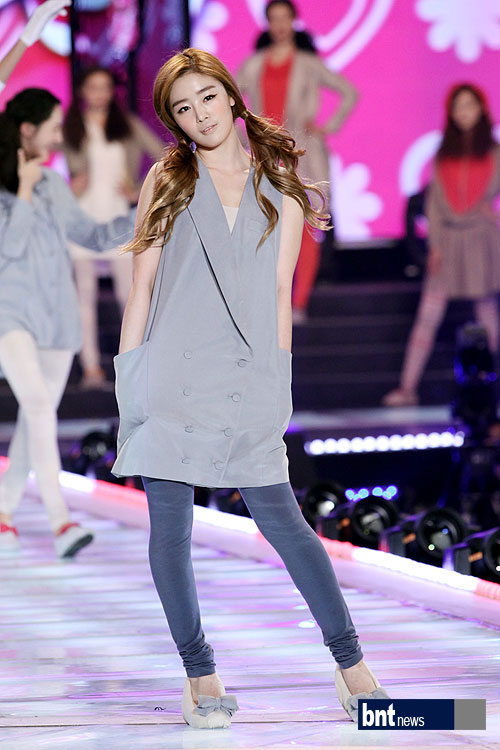 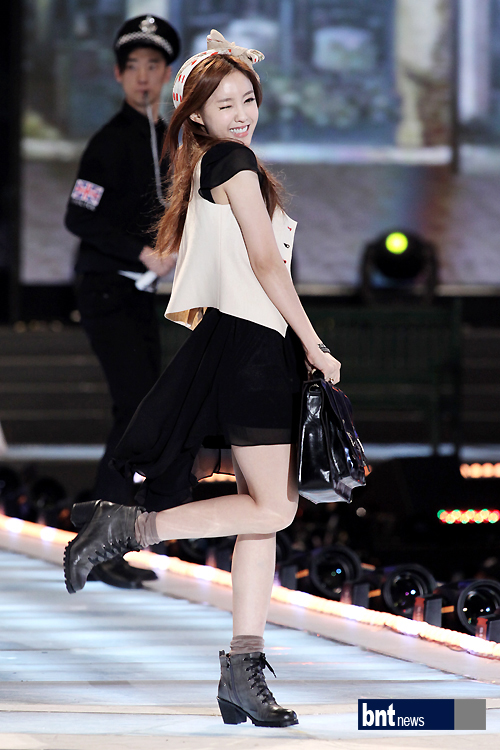 Variety’s favorite couple MBLAQ’s Lee Joon and gag-woman Jung Joo-ri took the stage together in a pair of dressy casual ensembles.  Simple was key for both of their looks; she wore a polka dot dress and he donned a plain aqua polo and white slacks.  The yellow belt added a nice pop of color that went well with the blue of his shirt and wasn’t obnoxious. Another couple that walked the catwalk together was Son Ho Young and…a teddy bear? The duo were both clad in cloud-print from Castelbajac, with the red accents on the bear matching his bright pants. This ajusshi is much to old to be wearing clothes fit for SHINee–poor guy. 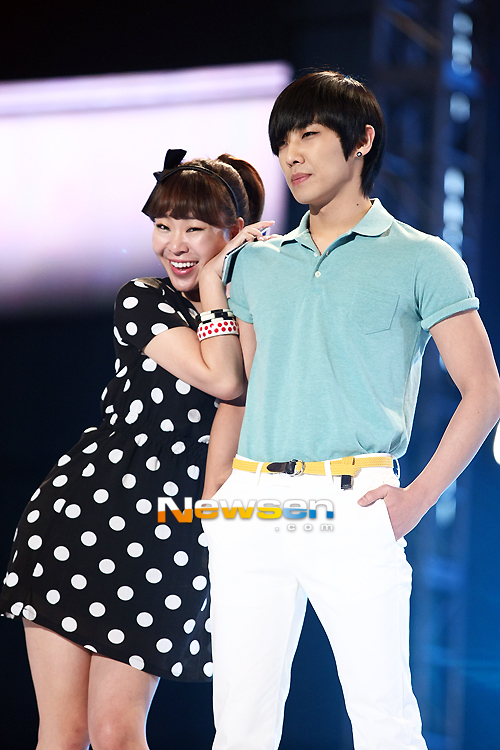 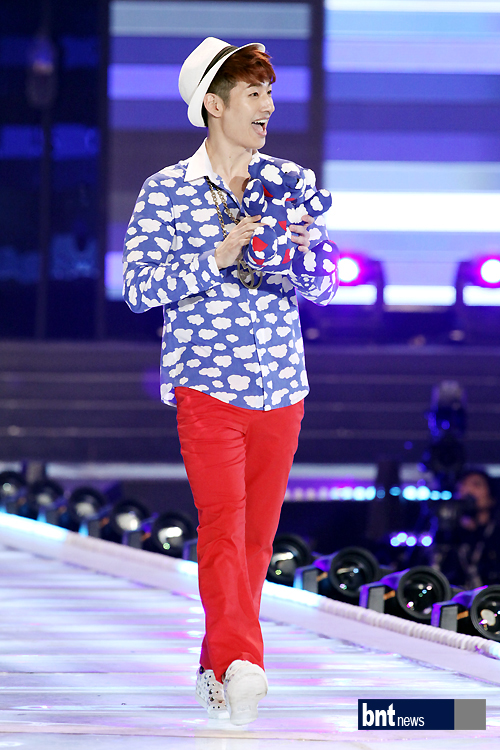 It isn’t a fashion show without those odd ball outfits that no one in their right mind would actually WEAR, and this show had them too.  Actress Choi Yeo-jin model an equestrian-style hat with a red jacket and not much else from Toe, but still managed a more wearable look than Jewelry‘s Eun Jung in a ridiculously unflattering dress from Style Nanda. 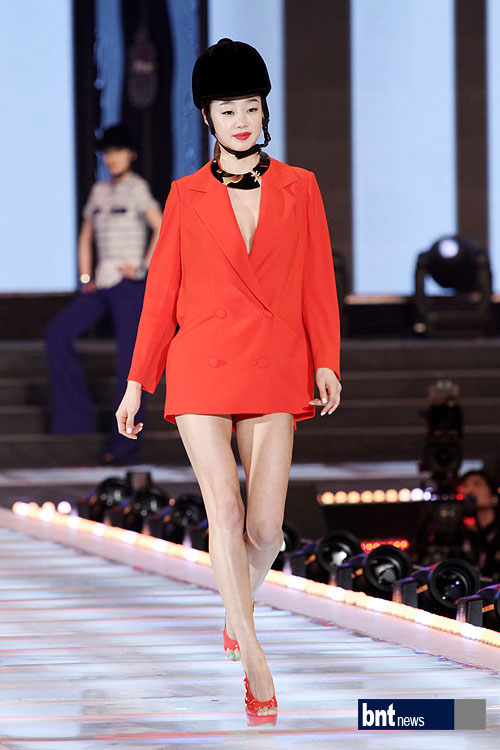 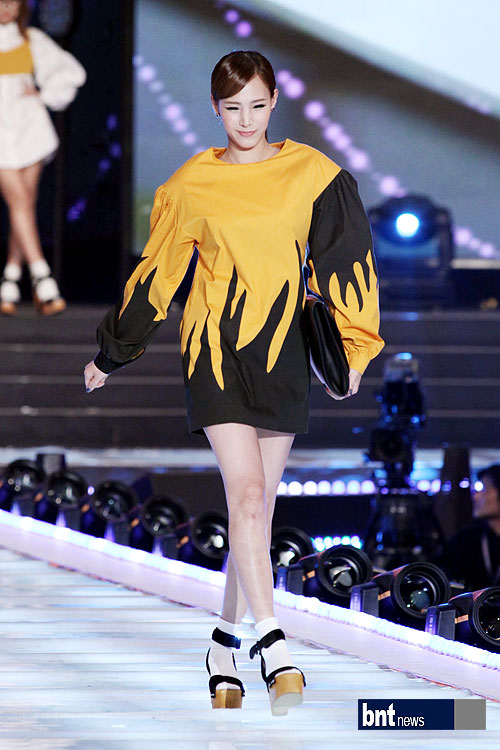 Finally, it is only appropriate to have the group referred to as “Model-Idols” act as models for this show. The eight members of Nine Muses took to the stage for new Korean brand 8 Seconds. The designs were trendy and fun, a perfect match for the young pop group, but there were still few misses amongst the group. Hyuna, Sera and Erin‘s bright color block tops with leggings looked great, however Eunji and Hyemi had metallic overkill in their outfits.  Eunji in particular had the least flattering look of the bunch, considering the bronze pants and sherbet top bring out the brassy tones in her hair making the hue overwhelming. Even though leggings are also obviously an integral item for this line, it would have been nice to see the members in dress (Leesem and Minha) ditch them to balance out the overall look of the group. 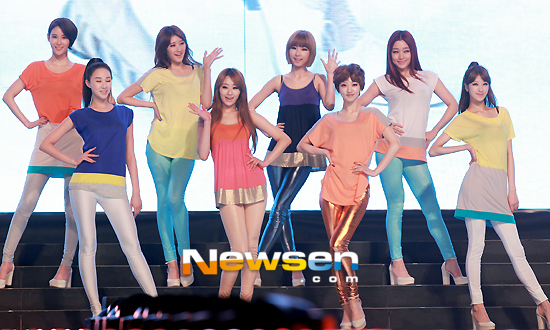 What do you think of this type of fashion show?  Would you have been able to pay attention to the models with Big Bang there to look at instead?