Sympathy for Mr. Vengeance is the dark, bleak and depressing introductory story in Park Chan-Wook’s well known Revenge Trilogy. This movie is hard to watch,  and in no way can be considered a fun ride, but those who do watch are presented with a very strong film whose ultimate message is the futility of revenge.

In a previous review I wrote the praises of Sympathy for Lady Vengeance, which I consider to be the best of the trilogy. In that review I had mentioned one of the interesting points of that movie was that we have the character of Lee Geum-ja taking the chance to reflect and take a step back from her revenge. In contrast, in Mr Vengeance, we instead have one horrible catastrophe upon another without much consideration for anybody’s well-being.

The movie stars Shin Ha-kyun as Ryu, a deaf and mute man, who is taking care of his dying sister who is in serious need of a kidney transplant. Ryu would do anything for his sister, and he’s more than happy to donate his own kidney to help. Unfortunately he finds out that he’s not a match to donate, and now his sister is stuck waiting on donor list for an extra kidney to become available. Ryu puts together any money he’s able to get, and gets involved with some illegal organ dealers who offer to give him the needed kidney if Ryu will pay a large price and also provide one of his own kidneys in exchange. Ryu agrees, and after the procedure to remove his kidney, Ryu wakes up in an abandoned building, broke, without one of his kidneys, and with no kidney for his sister.

As fate would have it, a short time later he is informed by the doctor that they found a donor for his sister, and he only needs to provide the money, which is now gone. In a last ditch effort Ryu’s girlfriend, Yeong-mi (played by Bae Doona), comes up with a plan to kidnap Ryu’s old boss’s daughter (the boss, Dong-jin, is played by Song Kang-ho) and hold her for a ransom to cover the cost of the surgery. I don’t want to give too much additional plot summary, but needless to say their innocent plan of kidnapping without any intent to harm ends up falling apart in every way possible. These events lead to back and forth conflict between the two men, which gets more and more ugly as the movie progresses. 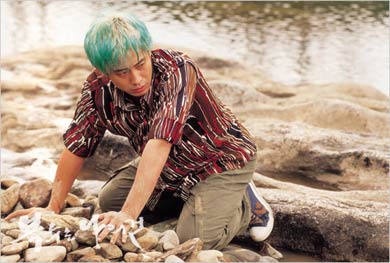 While Lady Vengeance may be more mature and refined, what makes this movie so great is the feeling of everything falling apart at the seams. Even though this movie was Park’s second major motion picture (after the very well known and received J.S.A.) it still has a feeling of gutsy inexperience (and I mean that in the best way possible). The movie is dark and gritty, I’m almost reminded of Scorsese’s Taxi Driver in the feel of the movie. I don’t feel that movie was Park’s best film (although to be honest I did until Lady Vengeance came out); however I do feel that it showed a great talent and potential for what was to come. Park would follow this one up with the much slicker Oldboy, and the much more mature Lady Vengeance, but there is something special is the overall style of this earlier film.

Perhaps due to just how dark and unforgiving it is, the film ended up not doing well at the box office in South Korea. While Oldboy at least had a few “cool” moments that really stuck out to film fans worldwide, this movie just makes you feel dirty. I’m not going to deny that the movie can get a little heavy handed at times. I’ve heard the complaint that the movie is trying to convince the audience so strongly on how revenge leads to nothing that it gets too extreme and that it ends up bordering on parody.  The movie is clearly designed to be more of a parable than presenting events from the real world, so I can forgive how extreme it can get.

Both actors, Song Kang-ho and Shin Ha-kyun, do an absolutely fantastic job, but Shin Ha-kyun really steals the show. The interesting thing about the movie is that both characters are, outside the context of these events, “good” people. I don’t believe an honest viewing of the movie would have you rooting for either man, or rooting against either. We watch as they both destroy each other’s lives and we just want to scream for them to stop. Unfortunately once the ball starts rolling it cannot be stopped, and it destroys the lives of all of those it comes in contact with. Additional performances in the movie were all well done, and I can’t think of weak link in the movie (perhaps Ryu Seung-beom in his small role is a little over the top, but I can forgive it).

The movie truly is a gem of Korean cinema. I think as time has gone on the movie can often be overlooked when compared to Park’s later entries in the Revenge trilogy. I hope that many others will seek this one out, watch it for themselves, and prevent it from being forgotten. I can’t promise you that you’ll have good time, but I can promise that you’ll be presented with a very well fashioned story, with some amazing performances, and you just might stop and reflect on your own opinion of the topic of revenge which seems so glorified in our society.