Like them or not, you can’t deny that SNSD are the current queens of K-pop. They’re the most popular girl group in Asia, beloved by millions across the globe. Befitting their queen status, the girls are always in the spotlight, whether it be on television shows or giving performances or participating in CFs or magazine photo shoots. One member in particular, Jessica, recently graced the March edition of Dazed & Confused, having modeled for the photo shoot back when she was in New York City for the Letterman and Live! With Kelly filmings.

This photo shoot is flawless for several reasons, one being that everything goes together so nicely. From Jessica’s outfits to her makeup and hairstyling to the setting to the look and feel of the photo shoot, it all went together perfectly to create an image of an edgy, urban girl living in New York City. Jessica, who is always pretty, looks especially good in these outfits. Normally, Jessica has a very trendy, chic, simplistic sense of style. She prefers to wear skinny jeans and leopard print and leather and fur jackets, never straying into anything unconventional. However boring her style may appear to be, it always looks great on her. She knows what to wear to make herself look good. But this photo shoot shows that Jess can pull off far more than her typical trendy looks. Personally, I very much prefer edgy, slightly grungy Jessica to the usual Jessica. Why doesn’t she dress like this more often? This style looks great on her. 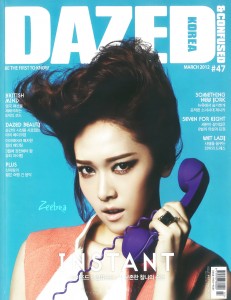 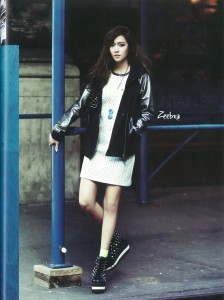 The first picture is a little out-of-place compared to the rest of the photo shoot. While the rest of the photos have a grungy, urban look, the cover photo reminds me of the 60s. The colors, telephone, and beehive hair-do give Jessica the image of an industrious, busy young woman from a previous era. Her messy up-do is a modern take on the beehive, and although I like it for this picture, I wouldn’t recommend wearing it for anything else beyond photo shoots. Her hair combined with her smoky, dramatic eye makeup give her an intense look.

Jessica’s second look is sporty-chic. Almost everything she wears in this photo shoot is from Coming Step, and that jacket is not different. The jacket worn over a white perforated mini-dress and with studded platform sneakers give Jessica the image of an urban young girl that spends her days shooting hoops or traversing the streets with friends. The blue binkie necklace and lime-colored socks add a playful pop of color to the otherwise monochrome outfit. 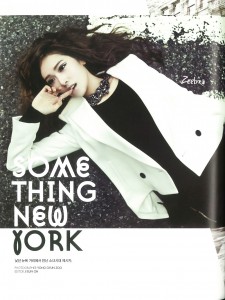 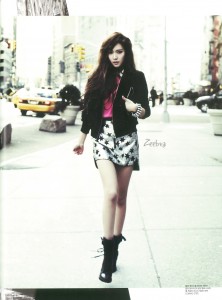 Jessica’s next outfit is more posh than her previous ones. She lays on the ground(which must be very uncomfortable) as if it were a bed and sensually places one finger to her lips. Here she’s wearing a black-and-white Coming Step blazer, black shirt, and short metallic necklace. Her next outfit is a mixture of girliness and edge. The glittery Coming Step skirt and bright pink top are a fun, playful touch to the otherwise edgy look. 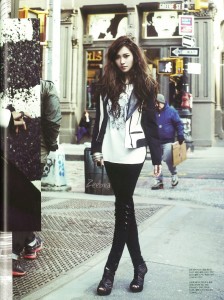 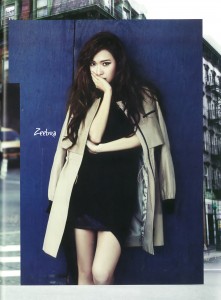 Dressed again in Coming Step, Jessica’s next look is more casual and boyish. The leather jacket, top, and black skinnies are very much what someone would wear on a regular day-to-day basis. Jessica’s hair is the primary focus in the next photo. In truth, the hairstyling is pretty much the same throughout most of the photo shoot, but in this photo it takes precedence over the actual outfit, which really isn’t much to talk about. I like this ratty, bessy, bed-head look. It fits the mood of the photo shoot and her styling. She it helps create the image of a young, stylish city girl.

The final photo is also very boyish in styling. Sica still has the messy hair-do and 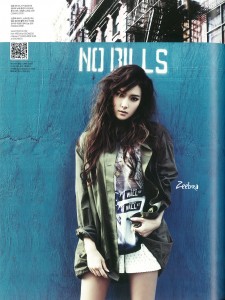 smoky eyes but now she’s wearing an army-green Coming Step shirt over a printed T-shirt and white shorts. A very basic outfit, yes, but she still looks amazing in it. I’ve always had an honest appreciation of layering so I like the silky khaki shirt over the printed top. Though a little hard to see, the shorts have a floral print, which adds some sweetness to an otherwise edgy-chic look.

I liked this photo shoot a lot and I hope Jessica had fun taking it as she strolled through New York’s busy streets. She looked every bit the stylish city girl in this shoot. I would love to see her work this style more often. I’m aware that a stylist put together these looks but they’re not that difficult to replicate at all. In fact, I would advise all my fellow lovers-of-this-shoot to go to NastyGal.com, which has tons of clothing very similar to the style that Jessica wears for this photo shoot.