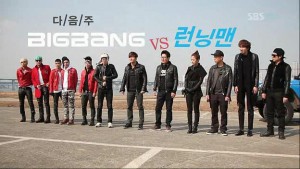 As we close out February and head into March, which just might be the best month ever, what has K-pop springed on us? The Brave Girls comeback with “Nowadays You,” Park Bom performed with Se7en on Inkigayo, John Park is “Falling,” the dads of the all the Beast members danced to their hit “Fiction” in a totally cute way of showing their support for their sons, and Big Bang is gonna be on Running Man next week!  What are the 5 things that happened in K-pop this week that I think was a little more special than the rest?  Keep reading to find out.

The end of of anything so loved is always bittersweet and while half of the current 1N2D cast will stay on for season 2, Lee Su-geun, Kim Jong-min, and Uhm Tae-woong, it won’t be the same without Lee Seung-gi and Eun Ji-won.  And oh my gosh, Na PD cried!  They’ve handled changes before well so hopefully they can do it again–best wishes for season 2 with the addition of new cast members Kim Seung-woo, Joo Won, Sung Shi-kyung, and Cha Tae-hyun. Hopefully they’ll be able to produce a new type of K-variety magic.

There was a heart-warming story told on the last episode of Star King, when a young woman had her long hair cut to make a wig for her friend suffering from cancer.  It was a very touching segment in the show.

3. Getting the Feel of Things

On the latest episode Running Man, the guests were Lee Da-hae and Oh Ji-ho (much to Kim Jong-kook‘s disappointment).  Their game at the fish market brought lots of laughs as team members had to “feel” their prey and then find it in the market.  Da-hae was a trooper, Song Ji-hyo surprised me by ‘acting like a girl,’ and Ji-suk-jin‘s response was no surprise at all.  But seriously, Yoo Jae-suk did those years on Family Outing wear off?

And I know Yoo Jae-suk is the Nation’s MC, but the bit with the seagulls is ridiculous.

This week marked the debut of Lee Hyori and Jung Jae-hyung‘s K-variety/music show You & I.  The pair have a great rapport and did an excellent job of interviewing their guests. The set of the show is innovative and I can’t wait to see who are their next guests.  Here’s my fave performance of the night IU singing Sting‘s “Fields of Gold.”

Big Bang is back and I’m far from being blue.  Am I feeling the song “Blue?”  Yes, I am.  I loved the song, but I wasn’t really impressed by the MV.

Those were the 5 Thing I LOVED in K-pop last week, were they yours?