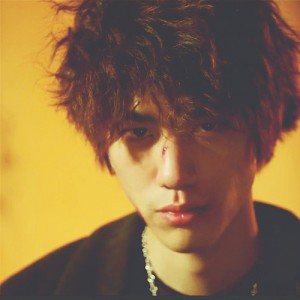 When tvN announced their plans for a new drama Shut Up! Flower Boy Band as the next installment in their Oh! Boy series, I will admit I was worried. Just from my experience, dramas with the title “flower” and “boy” put together never led to good results (ie: Boys over Flowers, Flower Boy Ramyun Shop) but there was a little part of me, the part left over from the punk rock phase I went through in middle school that made me a sucker for cute guys rocking out in eyeliner. So I eventually gave in to the remnants of my youth and started watching Shut Up! Flower Boy Band.

There is nothing I like more than bad boy punk rockers and to my absolute and utter delight, this drama is chock full of them. Besides the fact that Ji-hyuk (Sung-joon) has become my current obsession, the drama itself is great with an interesting storyline and good chemistry between the actors. Am I completely in love with Ji-hyuk? Hell to the yeah.

We’ll start where Bethany left off at the second episode. It finished with Byung-hee(Lee Min Ki) getting slammed by a bus as his band mates stand in shock. Three episodes in and this drama is making me reach for the Kleenex. Byung Hee’s death leaves Eye Candy reeling; they not only lost a good friend but their whack-o leader. The boys however, are quick to select Ji-Hyuk, Byung-hee’s brother-from-another-mother, to fill that position.

Of course the dead don’t really leave us, do they? Our now de facto leader has come across Byung-hee’s last gift to his band mates: entering Eye Candy into a high school rock festival. Indeed, this is where our plot line starts to progress. In order to honor their beloved leader’s last wishes and memory, these rambunctious boys group together and enter the rock festival straightening their act up at school in order to participate. Strawberry Fields, their jazzier and rich counterpart, also join the festival thus furthering the animosity between the two groups. After the not-battle between the two rival bands for access to the practice room, the boys get ready for the big showdown at the rock festival. 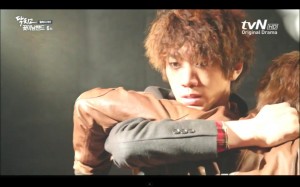 Strawberry Fields do their part blowing the judges away, one of them Seung Hoon’s older sister. Then comes underdogs Eye Candy with Byung Hee’s song, Hyun-soo (Myungsoo) who turned up at the last minute after getting hit by a car (Eye Candy should probably avoid traffic; it’s not boding well for them thus far) shows up with his hand is bleeding. Being the stubborn trooper he is plays with a bloody hand making pained–but sexy– faces, Ji-hyuk too immersed in the song doesn’t notice until Hyun-soo’s guitar solo in which the former envelopes the latter in a giant man bear hug. Rawr.  Eye Candy loses the battle but a video of their performance goes viral on the internet eliciting a growing fan base. HR Entertainment, a large entertainment comapny in which Seung-hoon’s sister works at, then contacts them recruiting them to join their company. But here’s the catch: they only want Ji-hyuk and Hyun-soo. Drama llama.

Our dear leader will have none of that and instead insists that it’s all or nothing as he tears the contract and dramatically lets the pieces fall to the desk. Returning home, the other boys feel guilty for robbing their two friends of a chance at stardom. After a surprise visit from Kim C and a phone call later, the entirety of Eye Candy is invited to release their single. This leads to a hilarious scene of the parents of the boys meeting and poor Ji-hyuk being forever alone in the corner. Eye Candy is now up for business and fangirls. 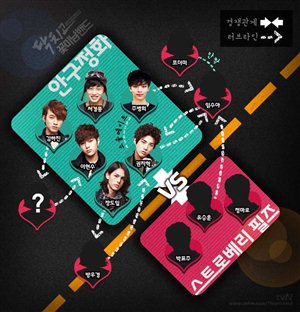 While all of these shenanigans are occurring, the love lines get developed and the drama deepens. Though I am expressing frustration at all the female characters thus far, I can’t deny that I am thoroughly enjoying the cute interactions of Ji-hyuk and Su-ah, mainly because of the former. The whole band is embroiled in some sort of love polygon but the geometry isn’t what gets me going. 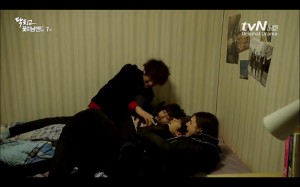 For me the appeal–other than rock ‘n roll pretty boys– is the insane chemistry that the five boys have with each other. The biggest aspect, as I highlighted earlier, is the 6-way bromance that this band has. Like Bethany pointed out, the camaraderie is similar to that of the ramyun gang in Flower Boy Ramyun Shop. Their friendships gets tested especially with Byung-hee’s death, the failed rock battle, and the contract signing but they stick it out the loyalty to each other overriding any problems life may throw at them. Each member has an interesting dynamic and role in the club, and its raw. While these boys will have each other’s backs, it is not just shits and giggles in Eye Candy. The members conflict with each other and there will be more to come, they’re imperfect in their ways and through that they become perfect. The slowly budding relationship that the delinquent band and their teacher, Shil-ba, have  is also endearing, especially since the seventh episode, the teacher’s obvious pride of the band absolutely precious.

But I have a bone to pick with this drama and it has to do with Su-ah, the pretty little girl who served as Byung-hee’s muse and captured Ji-hyuk’s heart. The girl is perfect. She’s pretty, nice, and of late, poor. She was a damsel in distress but don’t worry, this girl has a little spunk to her, too! It’s driving me up the wall at how bland this character is. I understand that she’s supposed to embody the innocence of a seventeen year old girl sheltered from the harsh realities of life, but can’t we get something to her? For me, I want my characters to be flawed. There needs to be a history behind them, I want them to be human. Su-ah reminds me of vanilla ice-cream: it’s nice and sweet but other than that it doesn’t draw you in. With characters like Ji-hyuk, and his crew who have flaws, depth, and this raw quality to them it gets irritating to see that the main girl is as interesting as a rock. Seung-hoon doesn’t seem too great either. It seems like the script writers are trying to illustrate the cold detached nature of the elite by making their characters bland as hell. 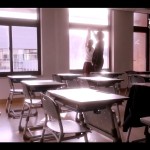 This drama is not doing anything different in terms of story line; you have your underdogs who are extremely like-able. On the other end of the spectrum you have the rich detached jerk-wads who you can’t but not like, their characters having only one dimension to them. The drama also has this habit of slow-motion dramatic walking in which the Eye Candy is swaggering down the hall with a look of utter disinterest on their faces with music blasting in the background.   But even with all the clichés, this drama makes it work and I attribute that success to the five actors who make up Eye Candy. Their antics and interactions fill you up with warmth and fuzzy feelings as you see them navigate the obstacles life seems to chuck at them. Eye Candy is a group of lost teenagers trying to find a place within a society that isn’t willing to accept them. Through this displacement, you see that the boys form a tight bond ready to weather anything. Even though this drama is definitely darker and angstier than its Ramyun Shop counterpart, it’s still a quirky and fun drama which has got me gushing to non K-pop fans like an insane fangirl.

What are your thoughts? Are Ji-Hyuk and Hyun-soo’s smolders piercing you in the heart or is Su-ah driving you mad? Leave your comments below!