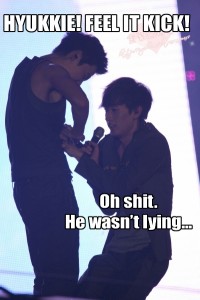 We’re a creative bunch, us K-pop fans. Bursting at the seams with home-made music videos, reviews, artwork, and of course, fanfiction. It’s certainly not exclusive to K-pop, but has been embraced among us with a startling vigor.

Spend 10 minutes trawling through fancams on YouTube or reading pretty much anything K-pop related, and chances are you’ll come face to face with shippers: fans convinced that their oppas or unnis are romantically entangled with their one true love, whom is rather conveniently also in their group. It is perhaps understandable that being frustrated with events that they want not taking place, these fans resort to fantasizing about what could happen behind closed doors. ‘But surely’ they wonder, ‘I can’t be the only one certain of Yunho’s relationship with Jaejoong, have you seen those two together?! But where could I find those like-minded?’

Luckily for them, the internet was duly invented (please note: these events may not be linked).

So far, I may have sounded pretty disparaging, but in reality I think fanfiction is a great creative outlet and has produced work of exceptional quality. With millions of stories from anime to WWE wrestling, and from Hollywood blockbusters to newsreaders, fanfiction is one of the most stimulating fan labours, not to mention the most enjoyable to peruse. I think Lev Grossman from TIME sums the concept up rather perfectly:

Fanfiction is what literature might look like if it were reinvented from scratch after a nuclear apocalypse by a band of brilliant pop-culture junkies trapped in a sealed bunker. They don’t do it for money. That’s not what it’s about. The writers write it and put it up online just for the satisfaction. They’re fans, but they’re not silent, couchbound consumers of media. The culture talks to them, and they talk back to the culture in its own language.

However, we must bear in mind that we are dealing with RPS, or Real Person Slash. These are not characters from a book; these are people with their own relationships and feelings. Is it fair to manipulate their lives to suit your pleasure, or does the fact that they are in the public eye make them fair game? I don’t think the authors are in any way trying to actually hurt or embarrass their idols, but internet morals are loose little things, and that is very much evident in fanfiction.

Let’s start with what I just called it, slash. Slash (or femmeslash for females, but that is far rarer) is putting the idols in a homosexual relationship with each other, an extension of the OTP (One True Pairing, an article on which Patricia wrote a little while ago). This alone would probably cause most of them a certain amount of embarrassment, given the nature of Korean society, but that’s not what I want to talk about. It’s the content of some of these stories. Some, as I have said, are excellent: fluid, epic and perfectly in character with the persona we see. Others slightly less so, and unfortunately bad grammar and spelling is rife.

But others take good taste beyond the re 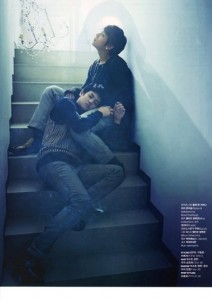 alms of acceptable and write about bestiality, rape, pedophilia, murder and all manner of things with glee. This is far more common than I expected it would be, and leads to the questions of whether these fans just using famous faces as a springboard for their own fantasies. Are these writings harmless, or are they encouraging such things in much the same way Marquis de Sade or The Book of O did?

Personally, I think having to deal with this is another pitfall of the internet, but avoidable. It’s hardly fair to dictate what people have a right to read. Would I read an AU (Alternate Universe) story about Yoseob and Doojoon having a bakery and generally being happy and not stressed out? Yes, on a quiet weekend I might, much like I would watch Antique Bakery (that’s a bonus film recommendation, let it never be said that I don’t love you). Would I read about the same idols beating each other to death in a SAW-style plot? No I certainly would not, no more so than I would watch the films. Yet far more people have watched SAW than Antique Bakery, so perhaps I’m the anomaly in refusing to read about such things.