Baby Talk #3: What Does Hello Baby Have To Offer?

Hello Baby Season 5 has hit the ground running, and MBLAQ and their three multiracial children have created a lot of cute moments, plenty of tears (including Mir’s) as well as many moments that have made Gil and I stop and think beyond the front of five idols and moon-faced babies. Today, Baby Talk goes a step further to talk more in-depth about our opinions on MBLAQ’s Hello Baby and analyze to what extent the themes of the show have any sort of real social substance. Let’s jump right into it, shall we?

Gil: This is my first Hello Baby season and it’s been interesting thus far. I personally think this show is ingenious; you’re getting to the heart of biology. As much as we women love our chocolate abs, nothing makes us squeal more than seeing our favorite ideal be fatherly and interacting with kids. You can’t deny biology.

Nabeela: This is the second season of Hello Baby that I’ve watched seriously (I didn’t really care for SNSD and Sistar’s seasons). And I won’t deny it–I squeal with childish delight watching five handsome boys put their daddy skills to the test; indeed, biology is a beautiful thing. I must say though, the HB writers really twisted things up this season. What do we think of how Hello Baby 5 is going so far Gil?

Gil: I think it’s pretty interesting, the writers did pull a twist by providing three, multiracial kids. The fact that these five young men have to handle three children is already a huge challenge, as dividing up attention can get hard and favoritism is definitely evident. And what is this about people shipping the Appas with the kids? I know Mir said Lauren was his ideal type but, um, ew? 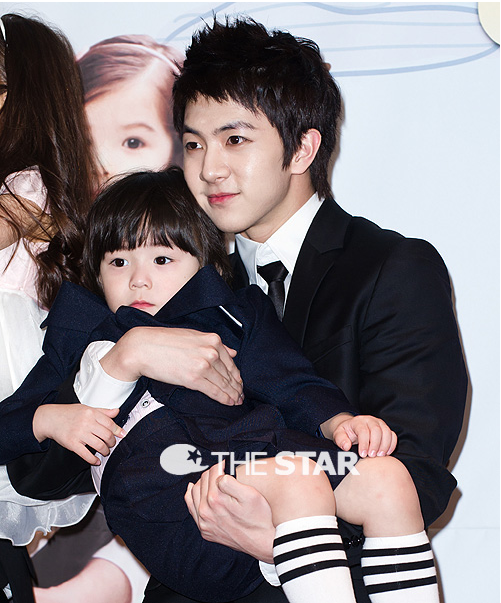 Nabeela: Seriously, three kids for two parents is already a handful, but for five male idols who, for all we know, don’t know a thing about parenting–practical absurdity! And honestly, just because the kids are a bit older and have minds of their own doesn’t mean they’re any easier to handle. We all know our lovely Lauren is a diva, Leo is a rambunctious animal, and Dayoung is as shy as a deer but as fierce as an ice princess. While I love the show and all the kids so far, I’m wondering why HB5 decided on three older children for MBLAQ. Gil, Why do you think this is?

Gil: The purpose of the network and the directors of this show is simple: get money. After seeing idols upon idols take care of a baby on previous seasons, it can get fairly monotonous. So HB shakes things up a bit and throws not one, not two, but three children in! It provides for more conflict and interesting plot lines for the show to follow and entices people to watch. Not only does the show capitalize on the relationships between the children and their “Appas” but they highlight the relationships between the children themselves. I for one adore the friendship that the Lauren and Dayoung have, even though I was not at all pleased with how the directors were trying to pit the two against each other at the beginning. The show is also trying to push the Leo-Lauren love line–which let’s be honest here–is kind of weird. They’re what, five years old? Why is HB5 trying to insinuate romantic relationships at the age of five?

Nabeela: I’m pretty sure the kids may be even younger than that–so yeah, that’s kinda gross. It’s interesting that you bring up the receptiveness and monotony of previous seasons, and how the children’s interaction between themselves this season bring about another whole type of entertainment to watch besides the MBLAQ dads themselves. I never even looked at it like that, but it makes sense. Plus, it doesn’t help that all the children are gorgeous (and Lauren is already a model). Oh, and I wouldn’t worry too much about the love-lines. I’m pretty sure they’re just there for some comedic relief from MBLAQ’s fail parenting at times.

Gil: I feel like instead of sending food to the MBLAQ members, some parenting books would do some good. The other aspect we should highlight is the fact that the children in this HB season are older than the previous children who were all infants to toddlers. Older kids, while they can comprehend situations better and follow instructions, can be sassy and like to talk back. With all the flack we give MBLAQ, I’ve got to give them some props for actually trying to teach and educate the children. Even if their methods are questionable. What do you think about the age factor Nabeela?

Nabeela: Hah, Gil we sound like news anchors! But, to answer your question, I think the age factor is a major selling point for the show. Like you mentioned, the sass and talking back, while a brash new face for Hello Baby, is also giving us something a little exciting to watch–you know, a little spice. I think the banter between the kids and MBLAQ is forcing the dads to be more proactive in their roles on the show. On previous seasons, members who weren’t so comfortable with children were able to get out of certain things by passing their infant baby off to another more infatuated member. But here, the kids demand attention from all the MBLAQ members–everyone needs to be played with, all the kids know everyone’s name–there are no two ways about it. So in that sense, the age factor is also pushing MBLAQ to be earnest and creative. Now that we’re talking more about the children in context of the show’s intention, how do we feel about this “multiculturalism” bit and the “one family” label that we keep hearing so much on the show?

Gil: The multiculturalism is gimmicky, in my opinion.

Nabeela: OMG thank you! Finally, someone says it.

Gil: I mean I get where they’re trying to come from, trying to bridge cultural gaps and all, but the dark side, my cynical side, is saying that this is a result of Hallyu. That there is more emphasis in trying to be diverse with the global expansion of Korean culture. But, for me, having your diversity only extend to Caucasian and Vietnamese is limiting that effort to be truly global. Not only that, but the multiculturalism that the show emphasizes is not really apparent,  as I watched the children on the show, I didn’t really see how their global backgrounds really played an important part. It’s not as if these kids are completely new to Korean culture: they grew up around it and live it, so i think the show fell flat in trying to promote multiculturalism. 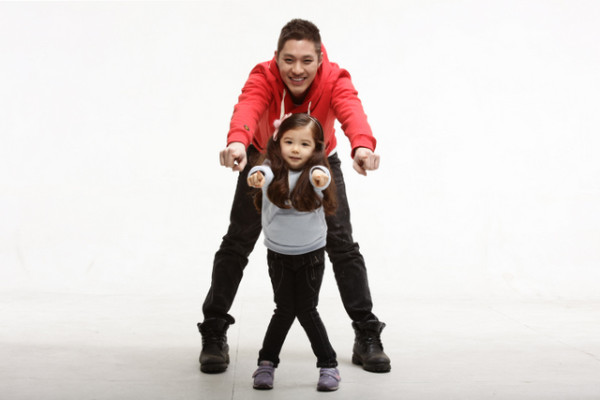 Nabeela: Yeah, as much as I think the whole multiculturalism aspect had good intentions, a Canadian, a European (both white), and a Vietnamese child (Asian) is not at all a “global” idea. While I get the show has to maintain their idea of aesthetics and work with the kids available to them, I still think HB got a little carried away with the idea that all the children come from mixed ethnic backgrounds. The idea has little meaning in the show because HB’s goals are to teach these “global” children about their Korean roots–which is fine and dandy to me, because I’ve always loved the show–but I think the show is over-hyping this “one world, one family” thing to no end.

Gil: We are the world, we are the children. We are the ones who make a brighter daaayyy.

Nabeela: HAHA, okay, well, that being said, all the politics aside, how has Hello Baby drawn out the parent in each of the MBLAQ members?

Gil: I mean, I personally think G.O. and Seungho are doing the best in terms of parenting. They aren’t perfect, no parent is, but I do appreciate what they do. I find the fact that G.O. is referred to as “Omma” completely and utterly amusing.

Nabeela: Hmm, you know at the start of the show, I thought G.O. and Seungho were doing the best. But I must say, Joon’s inner dad really came through in Episode 5. And if you think about it, Joon really has been trying the hardest since the beginning. When Dayoung got upset at the pool, he was the first to try to understand her mentality and shyness, and immediately tried to engage with her. Also, his efforts in trying to discipline Leo are fairly ballsy (as more often than not it didn’t end well) but at least he was trying to be the most like a real parent and correcting wrongful behavior. I really appreciated that the most from him, and I think he really makes an effort to connect with the kids without trying to be overbearing. Still, I do want Seungho to be my baby daddy at times…. 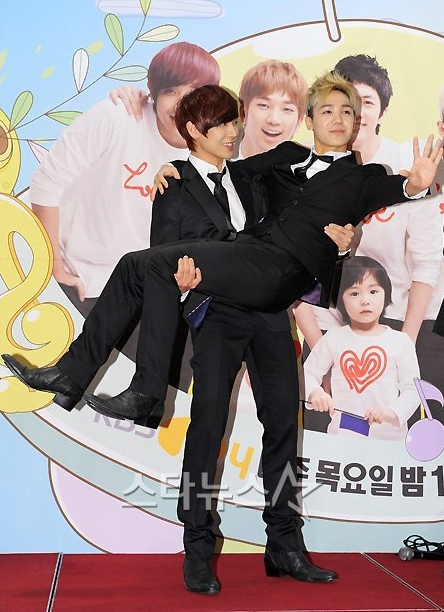 Gil: I want G.O. to be my baby daddy…but I digress. I completely agree with you about Joon. I was pleasantly surprised to see how well he interacts with the kids. Granted, I wasn’t too happy with the way he handled Leo in Episode 2, I had to give him credit for actually wanting to discipline his son. Being a parent goes so much farther than just providing basic necessities for your child, you guide them and educate them and I was actually quite happy to see that Joon took the role of disciplinarian. But it isn’t as if he’s this cold-hearted punisher, you can see that he truly does care for the kids and is trying his best with them. Episode five is a testament to that.

Nabeela: Agreed. So in the recent episodes, the boys are already talking about their final mission. As Hello Baby continues, what are you hoping the boys learn from this show? And how much do you think you’ll cry when the season is over?

Gil: Well obviously, I hope MBLAQ becomes better parents so G.O. and I can make a beautiful family but I hope they build good relationships with the children, and learn how to deal with them appropriately. I hope that Mir grows up, because as amusing as his antics are, there is a point where he needs to sit down and grow up. When this season ends? Will I cry? Pfft no (read: Gil will be bawling her eyes out).

Nabeela: I really hope Thunder and Mir step up their game. Interacting with children and creating this pseudo-family setting really has a lot to offer idols. While it is just a TV show, HB gives these idols a slice of real life, and there is a lot they can learn, not just about children and parenting, but about themselves too. And I will cry my eyes out when this show ends. This has been my favorite season yet.

After five episodes, the boys have definitely started to get closer to their “children” and improve on the inner workings of their big family. Especially after seeing a child specialist, the Appas knew what they were lacking in and adjusted their parenting style as a result. As gimmicky as the show maybe, you can’t deny the utter adorableness that comes along with the premise of five clueless boys trying to fill the role if parents. What are your thoughts? Who do you want to be your baby daddy?

Stay tuned to Hello Baby Season 5 and also to SB’s Baby Talk segment for all your Hello Baby updates! GilNa, over and out!