When I first heard about SM having a live photo shoot with some of their idols, I immediately wondered why they were having Jonghyun instead of Key and Yoona and Seohyun instead of Sooyoung and Jessica. If this was supposed to be a photo shoot for the company’s fashionistas, then surely Key, Jessica, and Sooyoung should’ve been present? I had also heard some of EXO were to be there, but didn’t give much thought about it.

All in all, I wasn’t anticipating this event at all, and it fell out of my mind until I saw it posted on Omona the other day.

Now, I’m quite happy the event took place. I liked watching the videos, especially the ones with Taemin,  and the oh-so-mysterious EXO members Kai, Lu Han, and Se Hun. I always appreciate eye-candy, which this live photo shoot was full of. The idols looked stunning and it was cute to watch them interact.

So here I am to give a recap of the event!

Let’s start with my favorite video. What I love about this video is the interactions between Taemin and EXO’s Kai, Lu Han, and Se Hun. I’ve always thought of Taemin as being forever alone. Younger than his band members, he never seemed to be close to them beyond associates and quasi-friends. Unlike Minho and Key, he’s rarely, practically never, seen hanging out with others. Because of this, he appeared lonely to me and I wanted him to have friends. So I was happy to see how buddy-buddy he was with EXO, specifically Kai. He finally has some dongsaengs to boss around! *Proud fan moment.* And Taemin looks unf with his hair like that. Knew my baby had it in him to look something other than cute, girly, and adorable. *Another proud fan moment.*

Besides Taemin, there are also his clones, EXO. They’re soooo cuuuuutttteee! I feel 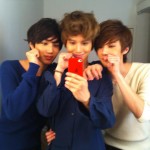 a little bad about b*tching how Kai is over-exposed (only a little), because he endeared himself to me me in these videos. He and the rest of EXO were so shy! It added to their cuteness. You could tell they don’t have the natural confidence Taemin and Jonghyun do in front of the camera. They’re debuting soon, a lot of expectations are on them, and they’re feeling it. Still, they’re precious. Lu Han is especially precious (so far my bias). I love how there just-so-happens to be a Rubik’s Cube there for him to coincidentally solve at the speed of lightning… boy’s got some skills. It’s weird to think that Lu Han was born in 1990 when he almost looks the youngest of the four. Kai somehow looks more attractive to me and next to Taemin he looks more like Changmin. His voice surprised me. I wasn’t expecting it to be so deep!

F(x)‘s Sulli and Krystal looked gorgeous in this photo shoot. I think the teased hair and heavy eye makeup looked best on Krystal. I’m a little unnerved at how voyeuristic this video is: in contrast to the happy, talkative videos the boys had, Sulli and Krystal sit still and look unaware as the camera focuses on their eyes, mouth, and legs. Creeeepppyyyyyy.

In this other video, Sulli and Krystal are talking and looking gorgeous. I love their messy half-up-do’s and outfits. Sulli looks beautiful in a black skirt, cut-out blue shirt, sheer tights, and heels, and Krystal, likewise, looks flawless. Her hair is similar to Sulli’s but with more of it up, little tendrils falling down to frame her face. She wears a cognac leather dress embedded with crystals and sleeveless shirt underneath. Overall, I like Krystal’s look more than Sulli’s. I would wear that outfit.

Some people don’t find Jonghyun attractive… I find those people crazy. I had to post this video because I didn’t feel right leaving Jonghyun out. Oddly enough, he didn’t pose for pictures. He just took them and pestered people, looking fabulously attractive as he did so. So, everyone, just appreciate this video because of Jjong.

I like Yoona with bangs. I think she looks great with them! She definitely looks fabulous in this photo shoot, as did Seohyun, who looks even more like Yuri than usual. Their interaction with EXO was a little awkward, EXO still being bashful and Seohyun and Yoona not helping the situation. I’m side-eyeing the “You worked so hard!” comments. Honey, you sat there while people took pictures of you. Maybe I’m not cutting modeling enough slack?

Picture time! These idols were thoughtful enough to take pictures of themselves for our viewing pleasure. 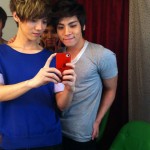 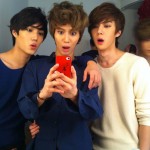 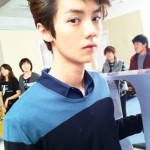 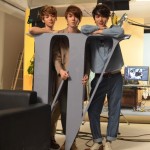 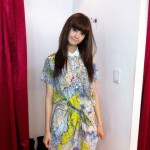 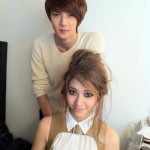 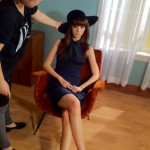 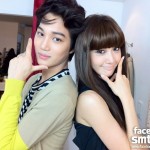 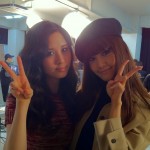 Flawless people are flawless. That is all.