The 101 on Crazy K-pop Fangirls

[Warning — if you are an overly sensitive, overly obsessive K-pop fangirl, you are advised to leave this post immediately.]

Most of the posts here at Seoulbeats are usually about the celebrities and their activities, but today let’s switch it up and talk about K-pop fangirls. Before I go on, let me just put it out there that this does not pertain to all fangirls of K-pop. There are many intelligent fangirls that understand the balance between entertainment and life, but a good amount of K-pop fangirls are CRAZY, and yes I did, I said it: crazy. I can guarantee you that in every performance, music video, variety show, or whatever their “oppars” are in, you will see at least one fangirl going crazy. If you have not encountered one of these fans than either you are an extremely lucky person, or you don’t use the internet at all.

The usual comments end up in some shape or form being OPPAR SARANG HE YO. I cringe every time I hear such an atrocity because I don’t understand how someone can love a group or a member without knowing them at all, and not only that, but also it just leaves the trolls and anti-fans that much fuel to duke with the fangirls (and trust me some of the fights there are Flava of Love priceless).

Because there are so many types of crazy fangirls, I’m just going to categorize them into 3 sections. 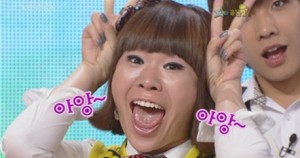 Sometimes I wonder if these people are trolls or fans because their comments are extremely idiotic.

For starters they will only mention their bias, but completely butcher the other members names. For example, MBLAQ: these girls will mention ” I <3 Joon, and I like the other Asian dudes that are dancing with him.”

If you’re going to state comments like those, please at least find out their names. For new fangirls, I might give them some slack, but they should know better to write those comments without suffering the consequences from the professional fangirls.

Another thing about these girls is that they think that just because they know sarangheyo, annyeong, and oppa they know Korean. As a Korean myself I shake my head thinking that these girls are sad, but at the end of the day these girls aren’t that annoying or harmful, they are just dumb or ignorant. At the most all we can do is just chuckle, and move on with our lives.

This is what happens when Section 1 girls go Super Saiyan or something like that. These girls are the ones that get on my nerves. 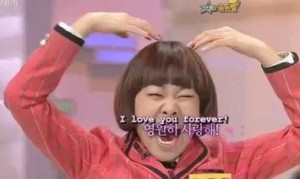 Everything thing they do, is dedicated to the oppa(s), and these girls treat the oppa(s) like they are God. These guys aren’t Gods, they are HUMANS… Humans. I think the worst part is when some female celebrity “flirts” (meaning touches his arm or some meaningless like that). I swear I think these fangirls go apeshit over this and want to nuke the celebrity, and the sad thing is that delusional fangirls flock together, meaning they attack in teams. They don’t stop attacking the celebrity’s fanclub, YouTube videos, or twitters until she has to apologize or something like that.

I hope no one stoops this low because this level is pathetic. The best way to defeat these fangirls is to open the blinds. I hear they are weak to sunlight.

And now for the last section…

This section is the worst section of them all. At least delusional fan girls won’t do the things these fangirls will stoop  to.

So everyone knows who 2PM is right? Sometime around their Again & Again promotional phase, a certain fangirl thought it would be awesome to write a fan letter to Taecyeon with her blood, and not just any blood, her period blood, with a slight sprinkling of pubes on top. She even posted a picture of her bloody pad as proof. I’m thinking everybody had this reaction…

I don’t understand who would actually enjoy getting something like that, and if you do, you need to get help. Another example are the WTF! ELF fan girls and the girl from Star King. For those that don’t know the story, there was a girl named Lee Eun-ji that went to Star King to talk about her weight loss story. Lee shared her story of going from being a big girl to a petite girl, and afterwards she took a commemorative picture with Kangin from Super Junior and uploaded it to the internet. Following the picture the Lee started to get an astounding amount of  hate messages from different ELFs, and ultimately because of that and her depression that she already had, she committed suicide.  I think this is an injustice, and I don’t believe the girls that wrote those hateful comments ever got their punishments. Luckily, we don’t see as much of these fangirls anymore, or have cases as bad as this one anymore.

If you’re wondering what about fanboys? Aren’t they just as bad? Stay tuned to find out.