Teen Top: Not As Crazy As Feared 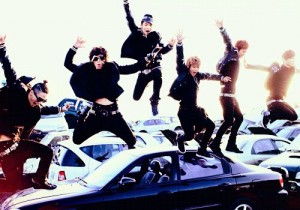 There has always been something unsettling about Teen Top. Maybe it is their unfortunate Youtube channel, TeenzOnTop, which probably attracts an entire demographic they don’t want, or more likely it was their smug, male chauvinistic previous single “Don’t Spray Perfume”. Even their biggest fans had trouble hiding their dismay at the remorseless cheating in the video, as well as the scenes involving underage clubbing. They needed something truly spectacular to drag themselves out of the mire of controversy, without losing their spark.

Now I like Teen Top, “Supa Luv” was my jam for weeks, they are very pretty, and once they escape puberty, their dancing is going to be excellent. So I was hoping that this time I would be able to hear their song without the outraged sound of the hypothetical merde hitting the hypothetical fan.

Teaser number one was a little flat; but promising, however the second teaser was released and it was like the Wonder Girls misleading us with “Me, In” all over again. I was so, so excited to be upgraded, and the dancing was really advanced (even if it smelled like 2PM).  When the MV and song itself came out, I watched it with a growing sense of sadness at the lack of originality. To be fair there were lots of things I liked about it: fairer line distribution so it was so longer Chunji and Co. feat Neil, the girl actually looked the right age, and the colours were gorgeous.  But I couldn’t shake the feeling in listening to this song that Teen Top were just a poor man’s Beast. It was the kind of thing I could imagine them doing if “Shock” never caught on. The clothes, the story, the dance, it seemed so similar to “Fiction,” the main difference being that the song itself sounded more like Justin Beiber’s “Baby” (yes, I went there).

So I’m dispirited, but there is light at the end of the tunnel–Teen Top haven’t relied on extreme, uncomfortable tactics to gain popularity. They just gave it what they had and it showed promise… of a sort. What they need is to distinugish themselves, K-pop is about finding a niche and growing in it – even Boyfriend has shown more growth than these guys and so far their niche is “been there, done that.” Still, I suppose it’s better than the “serial-cheating underage drinking promoters” that I previously labeled them under. Here’s to the Teens getting themselves back on Top, preferaby with Ricky being more then just a backup dancer.