Rainbow: Cute as a Pixie

Have you ever seen something so sweet and innocent that it almost hurts your teeth, but you can’t bring yourself to hate it because it’s so cute? No? Well, neither have I, but Rainbow Pixie’s debut music video, “Hoi Hoi,” comes pretty close. Rainbow Pixie is the newly debuted sub-unit of girl group Rainbow, a group that is more known for their sexy concepts. However, Rainbow’s team decided to switch it up this time by putting Seung-ah, Hyun-young, and Ji-sook in a sub-unit that specializes in the eternally fluffy K-pop practice of aegyo. 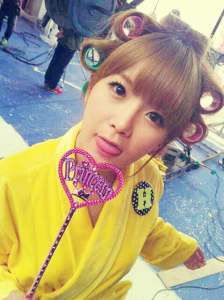 The song itself is cute, bubbly, and catchy, if annoying. Personally, I’m not really loving the song. The girls’ voices sound chirpy and overly autotuned at some parts, specifically in the chorus. I also find the song repetitive and almost grating. But what I really like is the music video. Normally, I’m not a huge fan of aegyo — especially when grown women are doing it — but this music video reminded me strongly of the magical girl animes I loved so much as a kid, so I couldn’t help but like it. I instantly connected it to Sailor Moon and the PowerPuff Girls (which isn’t an anime but an American cartoon) the moment I saw it. With that sort of nostalgia, how could one not love it?

Still, the music video is far from perfect. This group is already rivalling Orange Caramel in gimmicks and tackiness. There is nothing clever, original, or substanial about this group’s concept — it’s simply them looking as cute as possible. It’s filled with typical aegyo attributes: bright colors, cute expressions and gestures, hearts, colorful clothing and hair, full-skirted dresses, and lots of pink. I’m positive I’ve seen pillow fights, trying on clothing, wands/batons/lollipops, and prettily lying down/sitting still in countless other K-pop music videos. This group really pulled out all the stops to make sure their music video was as cute and fluffy as possible. I couldn’t help but notice how similar the beginning of the vid is to Secret’s “Shy Boy”. Just like in “Shy Boy,” the girls cutely lay around in robes and pyjamas as they sing. This music video doesn’t get any points for originality from me. 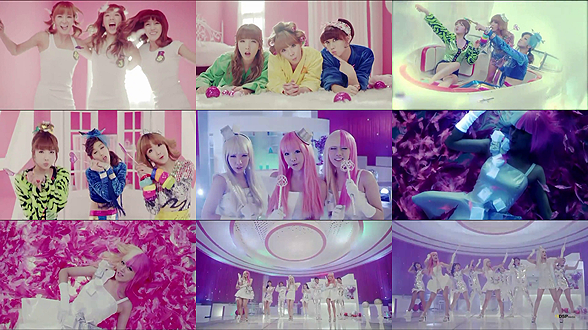 The fashion in this music video was horrible. All the clothing looked cheap and costumey and there wasn’t much flow between the outfits. Normally in K-pop MVs, a group will wear several different outfits that differ enough for variety but are similar enough to fit into the concept. In this music video, the girls start out wearing white pyjamas, then colorful robes (with heels!), before putting on some psychadelic outfits that look as if they were made from wrapping paper. Their clothing seriously looks like the cheap dolls’ clothes you’d find at Dollar Tree. And lastly, the girls wear floaty white dresses with garish detailing. 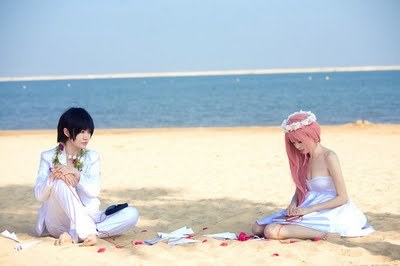 What I really loved about the music video was the pink and blonde wigs. I believe it’s these that remimded me so much of anime and girly cartoons. I saw the wigs and thought instantly of Vocaloid “Let’s Be Friends” video. Rainbow Pixie strongly looks like Luka in those white dresses and wigs. Since I’ve developed a fondness for brightly colored hair and have always loved pink, I sincerely approve.

What are your thoughts about Rainbow Pixie?