The beginning of the year is a time of both celebration and projections for the future. Nobody can deny it, 2012’s only just begun, but tensions are already heating up.

There have been promised comebacks from T-Ara, Nine Muses and Big Bang. It’s known that One Way‘s Chance is already in the process of producing two albums for MBLAQ and rookie group B1A4. SHINee, inactive in Korea for practically all of 2011, has informed fans that they are recording a new album for their comeback. In fact, at MBC Gayo Daejaejun, the boys released a teaser for their comeback. 4Minute has also announced their comeback in early 2012, leaving fans with inspiring words such as maknae Sohyun’s “We want to be the only rather than the best. We want to be recognised for our very own colour”. There are some big names floating around in that list (which will surely expand), but who will impress? Who will disappoint?

K-pop giant, SM Entertainment has released teasers for four of the members of EXO: Kai, Luhan, Tao and Chen. While there is no official statement on the total number of members present in EXO, a leaked photograph points to twelve. These four members have recently performed in the SM Orchestra at SBS Gayo Daejun. So far, the teasing process has been slow, if not achingly slow. Minimal information regarding the boys has been released and admittedly, each teaser leaves something to be desired, for SM is just pushing its recent obsession with fisheye lenses, boxes and matrix cameras. Even so, it’s got everyone stirred up and for good reason. The mere name of SM seems to promise greatness, or at least, popularity.

This can’t be said for EXO. Four of the members have been unveiled, and fans are desperately hoping Jino, formerly debuting in SM the Ballad, a project unit, is a member of EXO. Jino is already well-known for his excellent vocals, something that Kai, Luhan, Tao and Chen seem to lack. Chen was touted as the main vocalist for EXO, but from what we’ve heard so far, he’s not quite on par with the likes of Super Junior’s Kyuhyun and SHINee’s Jonghyun. Luhan’s vocals were also sampled to those awaiting EXO’s debut, but he too, proved average. In all fairness, though, at least we know that some members of EXO are capable of holding a tune. All B.A.P. has been able to show us so far is some impressive rapping and all that charisma may not be enough to make up for a lack in vocalists.

Despite the differences in ability in the members of the new groups drawn from what the respective companies have given us to work off, SM Entertainment remains the more obnoxious and infuriating agency in regards to their promotional tactics. Four members have been revealed and most recently, a fifth teaser has been released and — you guessed it — the teaser was again one of Kai dancing. Once again, I found it very unappealing, due to the distracting backing track and awkward choreography and it doesn’t take a genius to work out that SM is clearly touting Kai as EXO’s Yoona. If this continues, it will take quite possibly over a month for EXO to finally debut but it will also get EXO’s name out there, as frustrating as the process may have been. 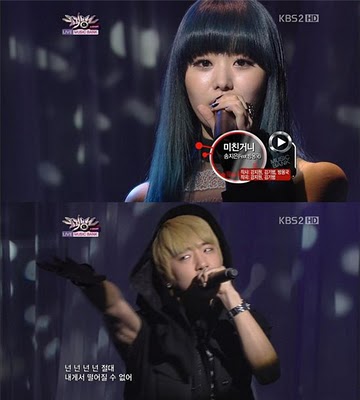 On the other hand, TS Entertainment is the agency responsible for managing Secret, and has already begun promotions for their new group, B.A.P. – before their official debut. Bang Yong-guk‘s already released an impressive digital single and featured in label-mate, Song Ji-eun’s ‘Going Crazy’. Bang Yong-guk collaborated with band-mate Zelo in ‘Never Give Up’. After gathering a heap of attention and unveiling the third member of B.A.P. Himchan, TS Entertainment has finally released the teaser for the whole group. So far, the promotional efforts for B.A.P. blow SM’s tactics out of the water.

B.A.P.’s teaser might be slick and promising, and if we were judging from teasers alone, B.A.P. takes the cake. No matrix camera, no obvious box, no awkward dance moves, no obscure backing tracks. It’s got an artistic flair that I quite love. But then, we must remember that K-pop teasers are known to be notorious for sounding like nothing like the real thing. In fact, we’ve got Bang & Zelo’s ‘Never Give Up’ to prove that point.

While I certainly wasn’t a fan of ‘Never Give Up’ — the combination of gospel and cheerleaders will never leave my mind — the song still manages to give us some proof that B.A.P. will hold genuine talent. At least, Bang Yong-guk is somebody to keep an eye on.

But in the end, who knows who will come out on top? Both B.A.P. and EXO haven’t revealed all of the members and there’s still a while yet to their respective debuts. The only thing their promotional efforts will result in is the amount of attention given to their respective debuts. For now though, my money’s on B.A.P. for (hopefully) quality music and on SM for the same phrase repeated over and over, complete with a video of the boys dancing in a box (but we’ll still love you SM, don’t worry).