WTF Moment of the Week: Eunhyuk And Donghae

Super Junior members, Donghae and Eunhyuk had recently released their song, “Oppa has Risen.”  Oh where to start? Okay, I love the fact that is a funky beat, and I love me some funk, but WTF?

The song is fabulous; I actually love it because it reminds me of the funkadelic eighties music and they even reference Funkytown, so props, boys. I will admit to liking Roly Poly (I’m an endangered species, we’re nearing extinction) so I liked the eighties disco feel to this. I know that this isn’t a serious musical composition; its pure fan service, but that in and of itself creeped me out. 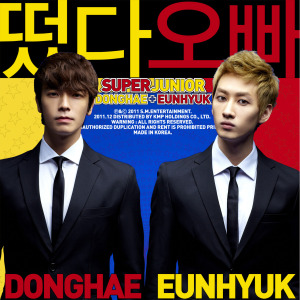 The English is grammatically correct but they are random phrases thrown together a la SM style. Alright, SM, here’s the deal: I need to pay for college and you need someone to proofread your English. See the connection? Call me. While the English was random the Korean lyrics were definitely creepy.

“I make fire in your heart. I am the original woman killer.
Should I seduce you so that I make you write, erase, write, erase text messages.”

Yeah Donghae, you lady killer, making me erase my text messages and write them again. You give Tiger Woods a run for his money.

“I won’t leave you alone, so that you won’t be able to sleep at night. Don’t think of stopping me, or else you’ll be hurt.”

Isn’t this what all the idols say to their fans? This line reminded me of the immense hold that idols have over their fans. But it can also be taken as a guy telling a girl to never think of anybody but him and the feminist in me is cringing. If I do stop thinking about you, why will I be hurt? Are you threatening me?

And this line reminded me of Gollum: “myyy preeecccioooouusss”

“Party like a superstar, gather pretties” — but that’s just my nerdiness coming out.

Not only is there oppa worshipping in these lyrics — not surprising seeing as that this is a fanservice song — but it’s also quite suggestive. For one, it’s also accompanied with a plethora of pelvic thrusts. But also:

“Yes! I’ve got a feeling. Shall we go all night? Whose heart should I play with tonight?
Once I’ve risen yell, oppa oppa!”

I know our Seoulbeats readers are smart cookies so I am pretty sure you guys can reach the conclusion without my help.

Creepy lyrics aside this song is not all too bad. But wait, what is that at 2:03?  ARE THOSE AFROS I SEE? When SM let you guys do your own thing, magic happens.  Donghae dons a red afro to match his suit but Eunhyuk has a black one, in my opinion it should have been yellow. Speaking of outfits, theirs are gloriously hideous. Donghae is in an all red shiny suit and Eunhyuk is his yellow counterpart. Both are wearing bow-ties because bow-ties are cool.

Not only is there the performance version of the song, our ever so politically correct Shindong directed a better — in my opinion — music video of the song.

This version is complete with a slap-fest between Donghae and Eunhyuk and slow-motion hip movements.

This last comment is for SM. After seeing this song I would like to tell you to lay off the auto-tune for Eunhyuk’s voice. That boy can sing, he may not have the voice of an angel but he is not tone deaf either. So this is a plea, if you can’t recruit me to proofread your songs can you at least give him some lines to sing and not random English raps?