Trouble Maker: You're Doing It Right

So everyone’s been buzzing about Trouble Maker this and Trouble Maker that recently here at Seoulbeats. Some of us love the song, some of us don’t care for it, and others feel like the sub-unit was over-hyped. Either way, Trouble Maker is here, and they’re already making lots of trouble.

It was too raunchy; I didn’t know where too look; It was embarrassing to watch with other family

Who watches Inkigayo with their family?

Anyways, I’m pretty certain if I added up all the seconds Hyuna spent groping Hyun-seung, it would only amount to a small fraction of the entire performance. To be honest, I really liked this stage. I think Trouble Maker is working this fun-sexy vibe well without overdoing. I’m also glad they were not another cute-sexy gimmick, something that seems more and more like a fetish to me than a concept in the K-pop industry. While some people think Hyuna is overcompensating for Hyun-seung’s lack of sex-appeal, and that the two lack chemistry, I have to disagree. In fact, I think the awkward balance that is Hyuna and Hyun-seung is something that makes this duo stand out. It has its own charm. In my opinion, the hardest thing to look at in this performance was Hyun-seung’s velvet suit.

But I can see why netizens have their panties in a bunch.  I kid, I kid.

In all seriousness, the Korean culture is highly conservative. Ideas about what is ‘sexy’, especially in the music industry, are staunchly different than what fans elsewhere in the world, particularly in more liberal media countries, are used to. For me, this performance was playful and fun–raunchy was not an adjective that crossed my mind until I began sifting through netizen comments. But hey, if its too raunchy for you, I can sit here and say anything I want; I doubt it’s going to change your mind if, culturally, you just don’t think its appealing.

The reason I bring up this particular case is because the sexy concept is so misunderstood in K-pop. What I’ve noticed is that over-sexiness is not something so easily called out, simply because fans enjoy it–Hyori gets away with her tiny little bras, and so does Hyuna with those skimpy dresses when she’s doing the solo thing. All male idols like Kim Hyun-joong, 2PM, and even Super Junior need to do is show a little skin and BAM–sexiness everywhere, ovaries exploding. But that’s because, more often than not, it’s one gender exuding the sex. 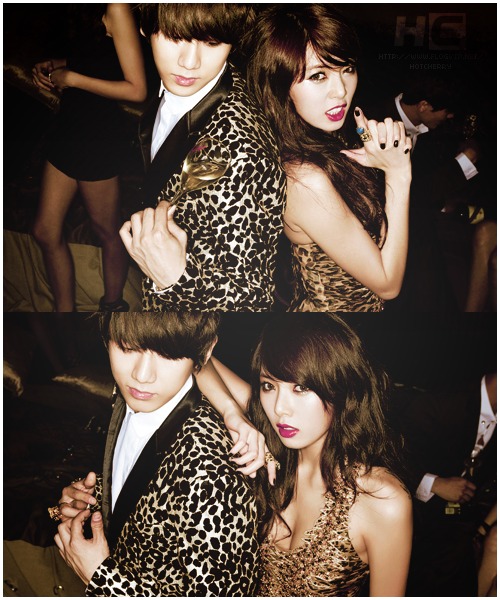 Trouble Maker, however, is a girl-on-boy production. Now, we have sexual tension, and no one is happy about it. But while netizens may be bashing Trouble Maker for being ‘too much’, I think Hyuna, Hyung-seung and Cube Entertainment hit the nail on the head–they’re concept is the epitome of sexy. Something about that tension really brings in the x-factor. So it’s not perfect–at least its something different from what we all typically expect from K-pop when we hear sexy.

To me, this concept was more than just a concept. It is also a promising display of musical expression. Right now, fans find themselves in the midst of music censorship–left and right, our favorite songs K-pop are being censored for sexual innuendos and references to poor behavior like drinking. In light of all that, seeing idols daringly take the stage with confidence in their provocative music and image is actually heartening. It’s almost as if music itself is fighting back.

Despite some of the negative responses, I hope Trouble Maker only encourages more idols and their companies to be unconventional with their music, even if for right now that simply means taking sexy to a new level. Though it seems like some fans are unhappy with Hyuna and Hyun-seung’s grinding all up on each other, I really believe it is only because fans don’t usually see sexy done so….sexy. Who knows, given time and more refined executions of more concepts like Trouble Maker’s, netizens may change their minds about how they see and how they appreciate the sexy concept.

So for all the haters, Trouble Maker, you’re still doing it right.