It’s December again, the year is coming to an end, and Winter has come and taken ahold of the world. Even here in the Southern Hemisphere, where it is supposed to be Summer, global warming and the forces of nature have graced us with torrential rainstorms and chilling winds instead.

And so, what better way to warm up for Winter than with our favourite folks at SM Entertainment, and their new collaboration Winter album: The Warmest Gift. 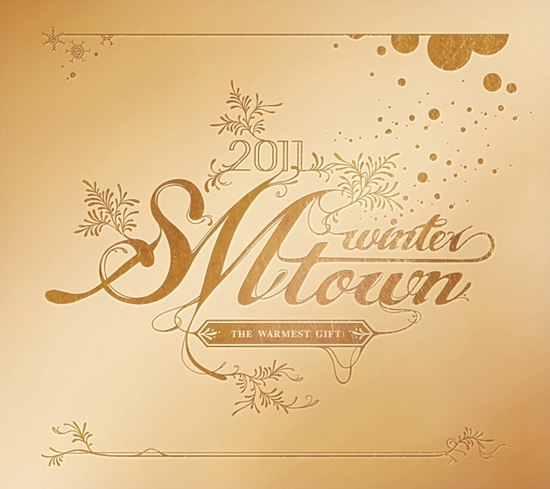 It’s been a good four years since SMTOWN‘s last collaboration album — the 2007 Winter SMTown – Only Love. Of course, we had that 2009 Summer SMTown album, but since it was missing a good chunk of our favourite idols from SM (namely the good old girl groups and non-idol bands), I think it’s fair enough to say it doesn’t really count as an SMTown album. But the past is the past, and the now is happening. And the now is SM releasing an 11-track collaboration studio album, chock-full of the typical bells and whistles associated with Christmas, eerily familiar (slightly generic) melodies, and cheesy string sections just in case the actual essence of Christmas was missed with the covers gracing the album (of course SM decided to join the “Last Christmas” cover bandwagon, of course). And to top it all off, we have a hastily made, fuzzy, cute, cheap, and questionably styled, music video.

I’ve said this before, that despite SM being a genius when it comes to assembling groups that have great chemistry/dynamics with each other, it has built a completely dislikable image of itself as being a corporate monster. Reading the comment section of Natalie‘s article ‘SNSD: Same Old Song and Dance‘, it’s interesting (but not surprising) to note that a good portion of people view SM’s idols as cold manufactured robots, and SM itself as a ruthless, evil, corporation. And really, who can blame them. But this is why these SMTown albums are so perfect, they crumble the image people have of SM. Thy crumble it by assaulting our ears with cheery tunes and completely endearing (although yes, cheap) music videos of their idols fooling around, goofing about, and having fun. There’s no pressure with these albums, it’s just a reason for SM to be all cheesy with each other. 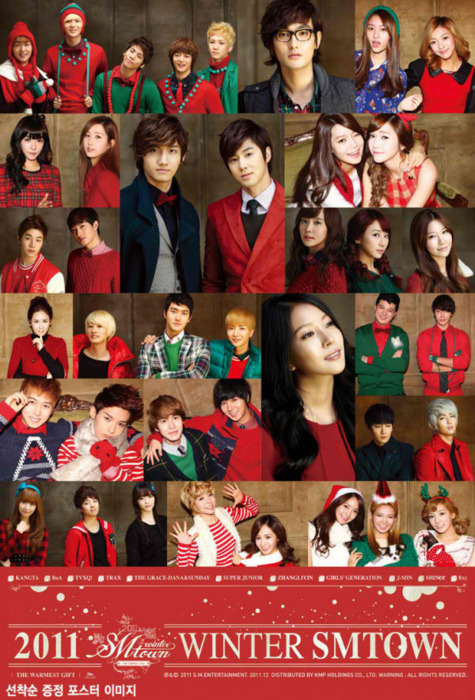 Oh, and of course, there’s the music. The contents of all SMTown albums are always very unsubtle in audibly representing the season which they are meant for. In that sense, they are very predictable. All of their albums successfully capture the spirit of Summer/Winter/Christmas, but they do so in a kind of generic manner. That being said — it’s not that they aren’t completely unenjoyable — they become enjoyable once you chillax and realise that none of SMTown’s albums have ever been ‘serious business’. Complaining about the music in an SMTown Winter/Christmas album is like complaining about the music recorded for a CF deal. In both cases, the quality of the music isn’t really the point. So it’s better not to dwell on either and rip you hair out over it, there are other things more worthy of your frustration.

Basically, for what these songs are, they aren’t bad songs.

We have Super Junior kicking things off with “Santa U are the One,” a preppy, up-tempo, jingle, complete with the typical tinkling which is an essential part of every cheesy Christmas song. I wish they gave Henry more lines though, considering he is the sole native English speaker in the band. It’s easy to see why this was chosen as the lead track, what better way to spend your Christmas than listening to the SuJu boys sing a love song to Santa, “EARRR AFTER EARRR”.

I really like “Distance” by BoA. What’s a SM Christmas album without a slow-tempo RnB ballad? And “Distance” does a good job of being that RnB ballad. BoA’s pronunciation is, typically, pretty good. For an SM original song, for a Christmas album, I’m pretty damn impressed. Despite being an amazing live singer, BoA has been criticised for her rather shrill, child-like, and at times thin vocals. RnB songs like these do a good job of hiding the flaws of her voice, and really bring out the best of BoA. It’s a contender for favourite song on the album.

“Diamond” by SNSD has the most visible current SM production, basically the song is very full and somewhat gritty — standard SM by now. Seohyun and Taeyeon sound really good singing in English! As do Tiffany and Jessica — but that’s sort of a given. It’s a likeable tune, it’s very full, up-tempo, but with a somewhat low undertone to it. Something I really like about the chorus is that it actually sounds like 9 girls singing all at once and harmonising together, which believe it or not, isn’t something I hear often in SNSD’s (and Super Junior’s for that matter) songs. Usually it just sounds like a few of the girls layered over each other repeatedly — which, okay, is probably the case here as well — but they do a good job of making it out like all nine girls are actually singing together. 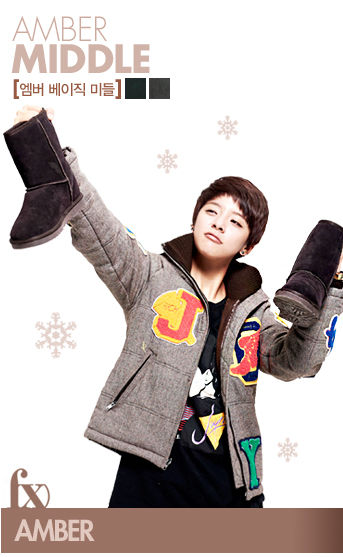 “1, 2, 3” by f(x) is very cute, snappy, and has a nice pace. There’s something really girly but punchy about f(x)’s vocals when they sing together, and they can actually bring spark to a song when they’re given a chance. The song does drag on at points, especially during the verses, but overall it gets the job done. One thing I really want to make a big deal of is the vocals in the song.
1) Sulli‘s voice is actually quite rich, smooth, and pretty, especially in comparison to how they usually make her sound in f(x)’s bastardised vocal processing. I can see Sulli actually getting somewhere with her voice, but only if f(x) changes the direction of their songs and give her a chance to actually sing. Her voice is no Luna, or even Amber, but it has appeal, and she’s also pretty consistent live.
2) Amber. Amber! AMBER!!! I think anyone who follows f(x) at least somewhat has realised that, yes, Amber can sing. And she has a gorgeous voice with a very nice and full timbre. And she completely shines in this song. Not only is she actually singing, but it’s in her native tongue, and she sounds fabulous. I’m so deprived of hearing Amber sing, that even one line is getting me giddy. It’s beyond me why Amber isn’t given more lines in their promotional tracks, when she would make a much more accomplished singer than a rapper. f(x) is kind of the black sheep of SM at the moment, there are three steps to changing that:
1) Give them songs that actually require singing.
2) Give them good songs.
3) Give Amber more lines.

For this album TRAX was made to do an english cover of a song present on their earlier mini-album, “Like a Dream.” It’s funny because the first time I heard this song all I could think of was how it sounded like a somewhat depressing holiday rock track. Props to me people, props to me. I’m a bit peeved that TRAX doesn’t get a new song, or even a cover to do, but… it’s a SMTown album. My expectations are already so low, they don’t leave much room for disappointment. Jay sounds fabulous as usual, and Jungmo needs to get his compositions out there more.

“For The First Time” by Kangta and “Amazing” by CSJH – Dana & Sunday, are the two original Winter ballads on the album. My pick for the better one is “Amazing,” simply because the instrumentation and vocals are more dynamic. They’re both pretty, and mellow, and they do what they do well. But I’ve heard enough pretty ballads in my days. I feel like SM kind of copped out when it came to giving songs to their less-promoted artists, which is saying something because SMTown albums are pretty much one big copout to begin with. Nonetheless, they’re both very nice songs and the vocal work is damn impressive — especially on CSJH’s part, they really make the song soar. Kangta too delivered well, I can imagine myself running into a bar where Kangta is serenading everyone with his voice. And I guess SM emphasised their superiority by giving them more classy songs.

We of course have the obligatory Christmas covers. “Sleigh Ride” by TVXQ is a standard Christmas affair, nothing particularly stand out about it, but it’s a SM Christmas album, so who can really complain?  TVXQ manages to keep it jolly all the way through, and their pronunciation isn’t bad at all. I’m not really a fan of SHINee‘s “Last Christmas,” there are less Christmassy strings, bells, and twinkles, and more light synths. It makes the entire thing run a bit thin to my ears. It takes some pretty boring production to make SHINee sound boring, and SM almost succeeded in this case. 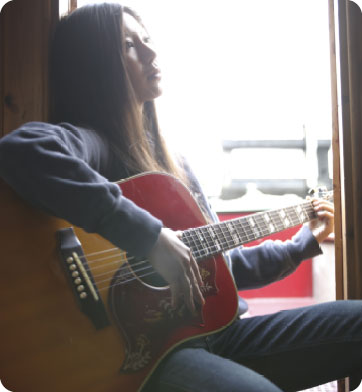 “The First Noel” by Zhang Li Yin, is beautiful. I almost forgot what a beautiful voice she had. SM went with the minimal approach when covering this song, with just a single piano playing all the way through, as well as a touch of exotic-ness. Although it could do with a bit more dynamics, Zhang Li Yin sounds beautiful, and as a result the whole song sounds beautiful. The only complaint I have is… though Zhang Li Yin also takes the award for best vocal work with this album, she also takes the award for having the worst pronunciation. I honestly can not understand what she’s saying, though I attribute that to more of the pace of the song than her.

The last cover is “Happy X-Mas (The War is Over)” by J-Min, and wow, how did I miss this girl? I thought I knew every single artist that is and has been, under SM’s roster and their mums. Apparently not, because apart from that EP she released a good while ago, I completely forgot this girl existed. But her voice is beautiful, and her pronunciation is pretty damn good, and the poor girl doesn’t even have her own Wikipedia page. What has she been doing in Japan all this while? SM, why?

As previously mentioned, it’s obvious that none of SMTown’s albums are intended to be a work of art, at all. They aren’t meant to be ingenious creations completely revolutionising the music of the seasons. They’re just an excuse to milk some money out of consumers, remind us that some of SM’s more obsolete acts are still alive (I’m looking at you Zhang Li Yin, Kangta, and– sorry, J-Min), and to give us some good old SMTown love. This year, they’ve added something new, all the songs are recorded in English. Which sort of just adds to the always present cheesy factor. SM can do cheesy, and they can do it with good production. With all the controversy surrounding SM, with the lawsuits, and the slave contracts, and the increasingly bad music, this Winter album is exactly what I needed. It’s a subtle reminder that the old SM is still very much there and waiting, and who doesn’t love to see some inter-agency love every now and then? Everyone under SM’s roster have such great dynamics with each other, and any collaboration between them sort of sparks some kind of sentimental value in you. So despite my logical side screaming at me, my sentimental side is readily swallowing all the rainbows and cheese SM is regurgitating. The album is also the most cohesive work SM has released this year, which… is pretty sad, that all their other efforts have been beaten out by a Christmas album, but what can you do?

And besides, it’s an SMTown album. Who can ask for more?