For a female, regardless of your national, cultural, or racial origins, passage into womanhood involves a transformation. This transformation can take many shapes and forms but there is always an artificial, inorganic component of this transformation that enables women to enter the world with a mask. From the outstanding outfit, the magnificent make up, and the absolutely appealing appearance, every female goes through a point in her life where she picks the clothes, the hair, the make up that draws a mask over who you are and presents you the way you wish, the way you desire.

In their latest MV for their repackage single “Cleansing Cream,” the Brown Eyed Girls explore this question. While the MV literally details the story of a young blind girl exploring the fascinating world of her sister’s womanhood despite her sister’s animosity and hostility, the MV is much more than that this narrative and raises several questions concerning womanhood.

The MV opens up with a high angle shot of a young girl in a bathtub, struggling for breath. The video then cuts to a high angle shot of an older woman, dressed in mature clothing and make up, a stark contrast to the make up less face and simple white dress on the younger girl. The camera’s movement is agitated and as we close in on their faces, they have the same black smear on their left cheeks. While they might literally be sisters, figuratively the suggestion is that they are the same person: the older, mature version and the younger, youthful version.

The MV then cuts to a succession of shots surrounding the young girl. Blind, she attempts to experience the world in ways that are not based in vision. And while that is noble, because she cannot see things, cannot understand things, she is isolated from everything and everybody around her. But she persists to understand. Like the little girl inside all of us, she yearns to understand adulthood with a freshness and innocence.

The older, mature version attempts to keep her composure but continues to build up negativity towards this younger version, a negativity which climaxes when she comes to the dinner table, covered in poorly applied make up. The older version then brings her into the bathroom, where she violently cleanses the girl of all the make up. The older woman does not like the younger girl’s attempts to come into her own womanhood. And while she lets the girl carry on for some time, she stops her as soon as she puts on make up and then takes it off.

Throughout the video, we see shots of the woman with the make up, the outfit, and the appearance of a woman who has it all together. As she stands staring at her lover with a clean face and tears in her eyes, we know that her pressure to maintain this image is taking a toll on her. But the young girl lives without such cares. She wants to protect the young girl. But she also wants both. She wants to be the mature woman and the young girl as well. She wants to keep these two people separate, hence her violent reaction to the make up.

The make up plays a significant role in this song and video. It is only with the application of the make up that the young girl attempts to demonstrate her own agency towards womanhood and the older woman grows frustrated and attempts to squash such a demonstration. The characters seemed, their motivations, and goals seem to revolve around make up. So is make up or, the more metaphoric, mask at the center of womanhood?

The Brown Eyed Girls seem to believe so. They seem to suggest that as we grow older, we grow into artifices. And while this remains a fact of reality, we want to protect a part of ourselves that will always remain that innocent girl. At times, we miss her, we envy her, but she has no place in who and what we have become now. No amount of cleansing cream will change that. 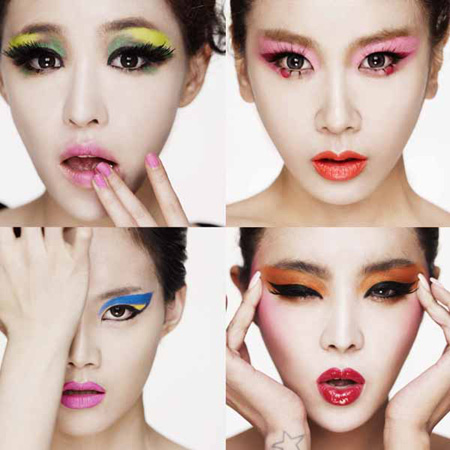