"Baby and Me": Watch it for the Eye Candy and Nothing Else

Long ago before curly hair and skinny jeans were trending styles for men, Jang Geun Seok was
handsome. Ok, so I exaggerated. “Long ago” was merely three years ago, but he was hot none the less.
However with this surplus in the looks department there was plenty of room for failure in the 2008
movie “Baby and Me”. In the film, a high school boy (Joon-Soo) discovers a baby (Woo-Ram) in his
grocery cart. With it is a note stating that he is the father and that the mother can no longer care for it.
The catch is, he has little money, his parents are out of town, and to put it bluntly he sucks at caring for
children. 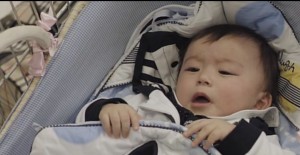 For this movie, deciding whether or not the acting was decent or barely passing was a bit tough, because
the story was so bad. Jang Geun Seok (You’re Beautiful), who played the character Joon-Soo, did an ok
job at making his character come to life, but sometimes it came out slightly forced. For instance, I had
a hard time distinguishing his fake “I am trying to get away with something” tears from his real ones.
As for the other actors, their acting didn’t have much depth. I could imagine them thinking “sad means
frown” or “mad means angry eyes”, they basically over acted. I understand that they had little to work
with, but what makes an amazing actor above average is his ability to make anything believable.

Before even beginning to tackle this train wreck, I would like to mention that there is no point to this
movie. No deeper meaning, not even a parting message. The movie just ends. Beyond this, my biggest
pet peeve was the writer’s inability to decide whether or not this was a drama or a comedy. The very
first half of the show was leaned towards the first and the second half towards the latter. I would have
been much more forgiving had they just picked one, or at least blended the two genres together. With
this, the plot was all over the place. One moment Joon-Soo is fumbling around like an idiot while acting
cute and the next he is crying over the difficulty of raising a child. Taking it even further, the story took
advantage of the fact that it was partly a comedy. Meaning the viewer was supposed to just go along
with its ridiculousness because it was supposed to make you laugh. As hard I tried to give my brain a
vacation, lazy writing and highly improbable situations seeped in. Don’t get me wrong, I did occasionally
chuckle, but I yearned for it to end rather than continue on its downward path. 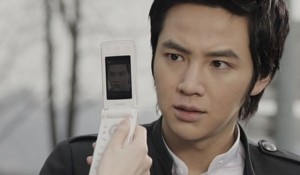 It was hard to look beyond the basic premise, and in result I didn’t really feel much for this movie.
Nor did I find any social/cultural implications to cling on to. I was really hoping that things such as
the number of teen pregnancies or child abandonment could be discussed, if only a little. As a side
plot, Joon-Soo had a friend who was working night and day to pay for bills rather than going to high
school, and over time I began to wish that more could be given on whether or not things like that were
common outside of movies/dramas. If anything, I finished the movie thinking about these things as I was
reminded that shit happens everywhere.

The greatest asset of “Baby and Me” is the casting of Jang Geun Seok. He brings his name to the table
and draws in a lot of viewers who might not have given the movie a go otherwise. Also the movie gets
bonus points for giving him a wardrobe that works with him. Throughout the movie the baby talks every

now and then. At first I hated it, but over time I began to find parts of it enjoyable. If used right, this
could have easily given the story a slightly different, sharper edge. What I disliked the most, as far as
technical aspects go, was the music. It shoved a certain emotion down the viewer’s throat, instead of
letting us find the mood on our own. It was too simple, mad equal’s rock music and sad equal’s slow
instrumentals.

If I haven’t mentioned it too many times already, this movie is all about Jang Geun Seok. Watching “Baby
and Me” will most likely be because you want to see more of him. So if you’re not a fan, a quick to cry
person, or easily amused, then by all means pass this up. You might laugh for a bit, but you might also
suffer from whiplash caused by the scatter brained script.