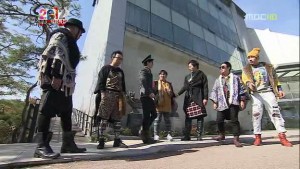 This Week in K-pop A Pink made a comeback, Suzy released “Too Much Tears” for the I’m a Flower, Too OST, the Wonder Girls were in Wonderland, we got teased by the Trouble Makers, Bang Yong-guk and fellow band member Zelo teased “Never Give Up,” T.O.P. had a smokin’ shoot for Harper’s Bazaar Korea, Jang-woo got ambushed by Eun-jung‘s mom, and the cast of Infinity Challenge had a fashion photo shoot. Keep reading to find out what 5 Things I thought were a bit more special than the rest.

The Nation’s Fairy, Lee Hyori has confirmed that she is dating fellow singer/songwriter Lee Sang-soon.  The couple have known each other for about a year, but didn’t start dating until five months ago after working together on a charity project to raise funds for abandoned animals.  The song “Remember” that Hyori sang for the project was composed by Lee Sang-soon.  Lee Sang-soon debuted as a member of the Roller Coaster Band, a Korean rock band in 1999.  He is also well know for his composing and guitar playing skills.  Lee Sang-soon was just recently in a nine month relationship with singer Yozoh before breaking up in April of this year.  The couple stated that they are just dating and starting to get to know each other so no big plans for the near future.  Best wishes to Hyori and Sang-soon!

Baby Soul, a talented singer and member of Woollim Entertainment‘s forthcoming girl group just dropped her solo debut “Stranger” featuring Wheesung.  The girl has got some mad pipes–love her vocals and the instrumentation.  I’m excited to see Woollim’s girl group, especially after hearing Baby Soul and taking into consideration how great they did in the boy band arena with INFINITE.

Flower Boy Ramyun Shop is my current K-drama of choice.  Jung Il-woo is just delightful as Cha Chi-soo and I feel bad for how often his intentions are misunderstood, but I’m thinking that’s all about to change soon.  Here’s a gem of a scene where Eun-bi tries to change Kang-hyuk‘s mind about hiring Chi-soo and Ba-wool complains about sharing a room with Hyun-woo, who’s just a little too flower boyish for him.

2. DJ CLazzi and Seulong tell you How We Feel

I mentioned this collaboration between Clazziquai‘s DJ Clazzi and 2AM’s Seulong in last week’s K-pop Indie Gem and this week they released the MV.  Love the futuristic and funky beats that go so well with Seulong’s smooth vocals.  The MV is pretty cool and matches the song with its futuristic, robotic feel.

ELLE Korea released a behind-the-scenes video of their recent photo shoot with Jaejoong, Yoochun, Junsu, Yoochun’s little brother Park Yoo-hwan, and actress Song Ji-hyo.  The shoot was part ELLE Korea’s charity project ‘Share Happiness 2011’ which starred the five members from Cjes Entertainment and will be featured in tehir December issue.  The backdrop of the photo shoot was beautiful and through the video it looked like it truly was a peaceful day for the five in which they enjoyed each other’s company.

Those were the 5 Things I Loved in Kpop this week, were they yours?