Korean idols are often depicted as dolls as seen by SNSD’s Sooyoung and Tiffany’s photo shoot.  In fact, SNSD have been depicted as dolls the most during their career. Their first studio album, Girls’ Generation, had an entirely doll-like concept. On the cover, the girls were mannequins and nearly all their concept photos showed the girls as Barbie-like dolls. 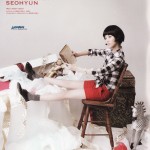 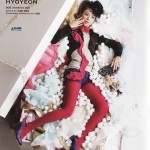 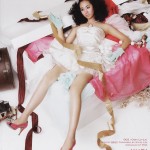 This photo shoot was taken way back in 2007, showing all the girls in freshly unwrapped boxes, wearing adorable clothing. They certainly do look doll-like. Seohyun looks adorably tomboyish with her bobbed wig, shorts, socks, and brogues. Hyoyeon looks lovely and colorful in pink tights and purple shorts. Yuri looks flawless in her white dress and perm. 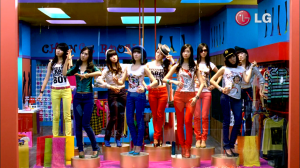 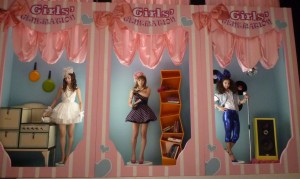 The concept is cute the first time around, but SNSD reused the doll theme in their music video for Gee. As you probably remember, the girls were mannequins in a cute little shop, and at night they came alive and ransacked the store. The only difference with Gee was that their clothing was more casual and colorful with brightly colored skinny jeans and graphic shirts – a very easy style to emulate.

In the Japanese version of Gee, the girls were literally packaged like Barbie dolls.  Both MV’s are cute and entertaining to watch but the doll theme can’t go notice.  Fast forward to 2011, Sooyoung and Tiffany are all dolled up again. In a darling little photo shoot for Vogue, the girls are glammed out in designer duds and meant to look like antique dolls stuffed away in an attic. I love this photo shoot – Sooyoung and Tiffany look beautiful in it and I want their clothing. The only thing that bothers me about this photo shoot is the guy’s mustache – what’s up with that? Oh, and the girls’ butt-shaped poofs. Forgivable, but there are prettier hairstyles out there. 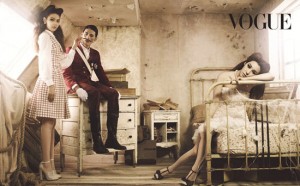 Sooyoung is wearing Miu Mius and the glittery, girly shoes go well with the rest of her ensemble: a Prada dress layered over a white blouse. Across the room from her is Tiffany, wearing a fluffy white Dior dress. I don’t know for sure who her shoes are by but they look like these wedges. 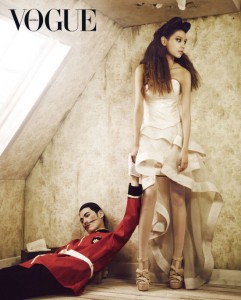 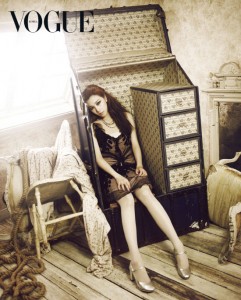 Sooyoung awkwardly holds the hand of the Male-Model-with-the-Epic-Mustache in the first photo. She wears a long white gown, which is tiered and has a longer train in the back, along with Dior shoes. Tiffany sits in a life-size replica of an antiqued doll box, wearing a Dior dress and silver mary janes. I love mary janes but I feel as if the silver clashes with the nude slip of Tiffany’s dress. However, her individual photo is my favorite of the photo shoot.

The question begs to be asked: why are female K-Pop idols so often depicted as dolls?  One can argue that this characterization represents womens’ place in society as a whole. However, I personally feel that this concept plays more into the well-known one ideal of beauty in South Korea. Dolls are often crafted to be perfect: perfect hair, perfect proportions, and perfect features. Wouldn’t you love to look as flawless as Barbie? Or more exactly, would you love to look as flawless and perfect as these idols? Besides perfection, dolls send out a portrayal of docility and femininity, traits that are often valued in Asian culture. So it doesn’t come as a surprise to me that the concept of dolls is so often used in K-pop.

What’s your opinion on the doll concept constantly being used among K-pop idols?