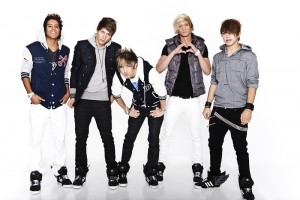 Being a Kpop idol is not for the faint of heart.  Why? Other than the extensive training period before debut, and the exhaustive schedules after- it’s because Kpop fans are amongst the most vocal, resourceful, indefatigable, and voracious in their support of their idols and their love of Kpop in general.  So, if you’re gonna Kpop, you better bring it.  Recently, a new US boy band listed Kpop and some of its biggest names as their influences.  And… I’m not sure they knew exactly what they were getting into.

The boy band is a US phenomenom with its roots coming from barbershop quartets and doo wop groups.  The ultimate super boy band were The Beatles which led to other groups like The Jackson 5, The Osmonds, and The Monkees.  Most recognize the groups of the 1980s and 1990s as your typical boy band- New edition, New Kids on the Block, the Backstreet Boys, and ‘N Sync. 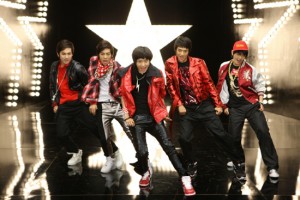 What Kpop has done to improve on the concept is definitely the packaging.  One of the things that Kpop has down to a science is creating the image of its idols: the Leader, the strong and silent one, the talented one, the outrageous one, and the cute maknae to name a few.  Thus creating a group with a guy for every girl.  During their years of training, they not only have their skills honed in singing and dancing- they are instructed on how to act in front of fans, how to answer questions in interviews, and how to handle any situation without breaking a sweat.  I’ve even read interviews where seasoned reporters humbly admitted to being outmanuevered by idols.  The idol package put out there by their management companies is totally perfect which fits in with South Korea’s culture of expecting ‘perfection.’ Idols, the boys and girls alike, travel with stylists, make-up artists, and hairstylists to make sure that everything about them from head-to-toe is perfectly in sync with their image.  And what God didn’t give you- your company or a plastic surgeon can.

The music created for Kpop idols by their management companies are always catchy.  It doesn’t matter how ridiculous the title, lyrics, or English used in the song may be- if the music is catchy kpop idols can perform the heck out of it and make fans, well the non-delusional ones, still love it.

Whether backed by the Big 3 entertainment companies (SM Entertainment, YG Entertainment, and JYP Entertainment) or by any of the other smaller up-and-coming entertainment companies all Kpop idols have gone through years of training prior to their debut.  Those that were already talented had their skill polished and those that weren’t… were taught how to look good.  Most idols are also mentored by sunbaes from their company, former or older Kpop idols that teach them all there is to know.  Kpop companies have the filming of MVs down to a perfect, if not sometimes boring, formula.  The MVs are almost always well made and for international fans, its a great experience.  Especially for fans from the US where the music video is almost something of the past with the creator of the music video religion, MTV, not focusing on music videos anymore, but reality TV.

But where one doesn’t have to be perfect for an MV shoot because a scene can be re-shot, a live performance in Kpop is perhaps even more important due to their Music Show culture.  There’s a music show every Thursday, Friday, Saturday, and Sunday in South Korea and if you can’t get a slot on one of the shows- you haven’t made it yet.  So to really make an impact in Kpop, your live performance which you’ll probably be doing four times a week for as long as your promotions last, must be spectacular.  And, if you’re lucky you’ll have a live debut that’s perfect- something a little like this.

With Heart2Heart trying to debut and begin a new wave of boy band invasion in the US, it’s only natural that they would look to Kpop because Kpop is currently the only place where the boy band is thriving and its popularity is growing exponentially internationally.  So what is Heart2Heart’s interpretation of the Kpop boy band?  The boys are good looking, so it seems that they got their image down.  How good they are at upkeeping their image and how well they’ll do in interviews, etc. is still unknown.  Heart2Heart has been mentored by Lance Bass of ‘N Sync, their Mix engineer was Chris Trevett (Britney Spears, Backstreet Boys) and the Mastering of their songs was done by Tom Coyne (Big Bang, 2NE1) so they seem to have a knowledgeable and talented group of people around them to help them with their careers.  Their leader Chad Future, directed and produced their video and member KX is in charge of their choreography- so there’s some talent in the bunch?  They’ve been together for less than a year, so the amount of practice they’ve had as a group is much less your average Kpop group trainee.  So how does Heart2Heart’s debut measure up to that of some of your favorite Kpop idols?

As a fan of Kpop, I’ll admit that sometimes the songs are cheesy, but “Facebook Official” has got to be the cheesiest song I’ve ever heard.  The lyrics are beyond lame.  The rapping was as bad, maybe even worse than any of Kpop’s obligatory ‘rappers.’  The singing is mediocre, and their choreo is pretty lackluster and not nearly as tight as most Kpop acts.  Seriously, I think they would have been more successful if they had said they were doing a parody and were like a ‘comedy’ pop act- because that’s what their music video seems like.  They tagged a number of Kpop acts in their video like 2NE1, Big Bang, DBSK, SHINee, SNSD, B1A4, KARA, and JYJ.  I’m not sure if that’s how Kpop fans found them or if they have been keeping Heart2Heart on their radar since the news that the group had been associated with Kpop,  but Kpop fans have found the video and are far from impressed.  I’m not sure whether fans are affronted by the group’s less than stellar video itself or that they were offended that Heart2Heart said that they were ‘inspired’ by Kpop and brought a weak debut. In the twenty-four hours, since its release the Heart2Heart video has had over 80,000 views.  At the time of this article, of the 5,428 votes the video received, 4,823 have been thumbs down, which is roughly 89% of the votes.  The remarks added have also been pretty harsh with most saying they shouldn’t have associated themselves with Kpop.  I’m sure that they thought mentioning Kpop as an influence and tagging some of the groups like they did would bring some traffic their way, unfortunately I don’t think they knew that Kpop fans could be so harsh and unforgiving to anyone comparing themselves to their idols.

Welcome to the world of Kpop, Heart2Heart.  Hell hath no fury like a pissed off Kpop fan.