Oh, SHINee. SM Entertainment and their partners in evil have done you wrong, boys. Is it bad to say that I actually had very high hopes for this MV? Oh, sure, I had an inkling that I was probably setting myself up for disappointment. But, I really didn’t think that it would be this bad. Pardon me while I have a little Shawol self-pity party in the corner. Before I get good and worked up though, let me start with the positive things about this video: the choreography lost none of it’s sharpness, and the boy’s dancing was as good as ever. Yeah…that’s about it. @#!*% you, SM.

The Concept: Or, to phrase it more accurately, the non-concept. Dancing on a water floor? Check. Dancing in a large room with a geometric background? Check. Vamping at the camera in badly lit alleyways? Check. In other words, this is just like any other MV to come out from an SM artist within the last year or so. Someone needs to beam down new ideas from the sky into an SM conference room. Or possibly provide them with a shot of adrenaline. You can almost smell the apathy rolling off this video in waves. Essentially, it’s just a lazy remake of the original version of the MV.  There’s nothing fresh, no effort in evidence, and next to no money spent. The entire thing looks cheap, like I could slap it together myself if I hung a green screen up in my room and used my cell-phone camera. SM clearly tried to shoehorn in the visual effects they’ve tried to insert in every video of theirs recently; there’s an indistinct sort of teal blue line floating around and distracting the boys. It didn’t work in the original, and it doesn’t work here. Perhaps they thought it could be cool and symbolic. Yeah, it’s symbolic all right. Symbolic of a lazy- @#!*% company. Oh, and Taemin with a whip? Super creepy. He might be legal now, but that whip does not belong in his still-teenaged hands. Give it back to the adult store you stole it from, Taemin dear. 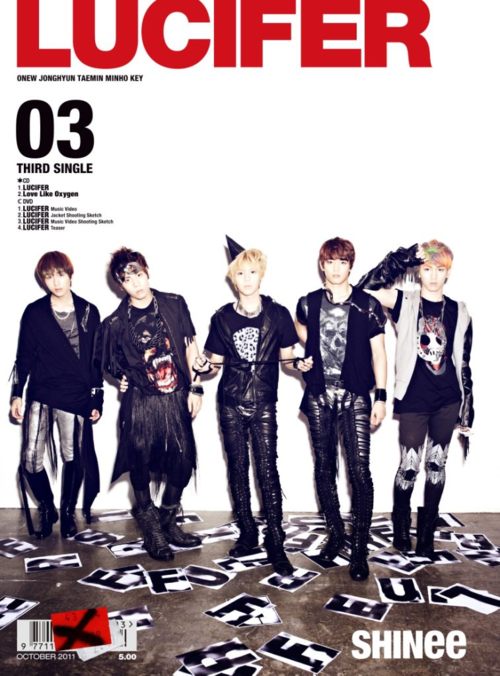 The Styling: Oy vey. What were the stylists smoking? SHINee is a group of very fresh-faced, good looking young boys, no two ways around it. So why are they always styled to look like drag queens? It kind of makes me wish for Key‘s half-shaved head all over again. The one positive thing that can be said is that their hair is out of their eyes, and somewhat acceptable were it to be worn in everyday society. But…sweet Jesus, they’re wearing leather leggings and fringe. Fringe is not acceptable in any circumstance, unless you are attending a costume party dressed as a seventies rock star. The most heinous offense was probably Taemin’s black leather birthday hat. Or dunce cap, whichever you please. Key’s checkerboard harem pants are also eye-searing, as are Jonghyun‘s goggles, the red jacket wrapped over Onew‘s butt, and the padded shin guards worn by all. In addition, no Jonghyun sexy back? Come on now, that was the main drawing point for me the last time around. I feel cheated.

The Song: I know it’s been discussed extensively, but I really can’t help but point it out again: what language is Minho rapping in? Klingon? Parseltounge? This is the one circumstance in which a rap in awkward English, rather than mangled Japanese might have been advisable. In fact, the entire song sounds garbled, as if it was recorded through the blades of a fan. I don’t think that even the average native Japanese speaker would have been able to make the words fit the flow of the song. Of the five though, Key is definitely the one who sounds the most understandable. Jonghyun isn’t too bad either. It doesn’t change the fact that my Japanese-speaking mother, who overheard this song, raised her eyebrows and asked “What are they trying to say?” You know what this means, SM? RECORD ORIGINAL SONGS. It sounds awful when you re-record old ones.

In sum, the entire venture was a failure. As somebody extremely fond and protective of the SHINee boys, it breaks my heart. Can’t SM learn from their mistakes? DBSK and BoA were the only successes that they managed to have in the Japanese market. Despite what Sones might tell you to the contrary, SNSD flopped hard, and now it seems that SHINee is headed down the same sad and sorry route. They let the craze over the Hallyu wave go to their head, and now the quality of their output is suffering.

I do have a few pro tips for SM though, if they want to salvage SHINee’s Japanese career as much as I do. Firstly, and most obviously, record original songs! It’s incredible, the wonders composing a song for the Japanese language will do when you’re trying to sing in the Japanese language. Secondly, expend a little bit more time and effort on the MVs. If I didn’t know who SHINee was and I saw this MV on the television, I’d laugh and change the channel. Thirdly, and most importantly…hire new stylists! I’m serious. Idols are marketed mostly on their good looks, and if you continue to dress SHINee like hobos, there goes half of their potential fans.

What did you think of the Japanese Lucifer MV? Do you think that SHINee’s Japanese venture is salvageable?