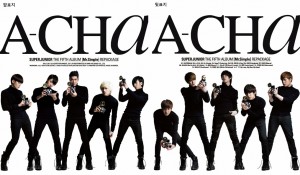 Super Junior has just released the album cover and track list for their repackaged album ‘A-CHA‘. Am I excited? Yes. Should I be less excited? Probably.

So I sincerely believe that deep deep down in every K-Pop fan’s heart, there is a part of them that likes Super Junior. In my case that part is more like a tumor. A tumor that clogs my logic-veins and prohibits rational thinking, and as a result I carry this strange affection for them. Basically, Super Junior holds a similar place in my heart as my other favorite groups DBSK and Big Bang, in that they can consecutively release mediocre singles, make me cry and bitch about it, but in the end my love for them probably wouldn’t regress significantly at all.

That being said, it wouldn’t hurt to see them release some good songs every once in a while.

A few days ago I was browsing through tumblr and I came across rumors claiming Super Junior’s repackaged single would be another saccharine SM product of cuteness, love hearts, and un-phenomenal melodies. Naturally, I was pretty devastated, and was ready to let the SJ boys meet my Ever Lasting Fist. Thankfully, the release of the album cover eased that worry.

I’m thankful this concept isn’t insane or as *snigger* ‘ubersexual’ as their initial one. It’s just a couple of good looking men dressed in black carrying sexy vintage cameras. I mean, there are some concerns. Like Yesung seems to genuinely think that greasy hair is attractive (we’re going to have to talk about that, babe), and I’m questioning the legitimacy of Heechul being in the actual song at all since he’s in the military and shouldn’t be recording pop tunes, but other than that it’s all good.

But it’s not. Because it’s Super Junior. And if following them has taught me anything- it’s that it’s never ‘all good’.

I have been a fan of these boys since before their ‘Sorry Sorry‘ days, because of that, as far as I’m concerned, that breakthrough lead single of theirs was just as much a curse as it was a blessing. Yes, it established them an untouchable place in the K-Pop history books. But they have been on a downhill slope ever since. As shown in graph form for easy observation, and because graphs are always really pro. 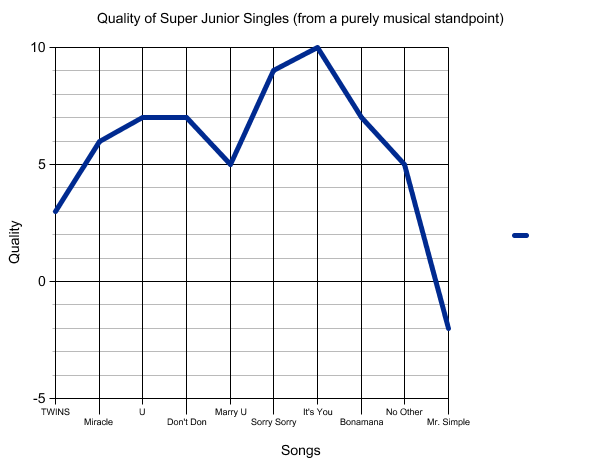 It’s like the little mermaid, where Super Junior is Ariel, and SM is Ursula. It’s like SM (Ursula) gave Super Junior (Ariel) the gift of break-through singles in the form of ‘Sorry Sorry‘ and ‘It’s You‘ (legs), and in exchange took away Super Junior’s potential for musical growth and development (Ariel’s voice). Basically, Super Junior has been stuck in a strange funk ever since 2010 and I’m not sure when they’re going to get out of it. Because yes, their music is now catchy and the definition of ear worm, but is it really worth it? It almost makes me- dare I say it- resent ‘Sorry, Sorry’.

The title track of their repackaged album is ‘A-CHA‘, and it’s described as a ‘rock based electro house’ song. Which you know, sounds all sorts of pro and musical sophistication on paper. But looking at SM’s track record so far, and reading the words ‘electro’ and ‘rock’ in the same sentence, I can’t help but fear they’re planning to release something of a rehashing of ‘Perfection‘. Which wasn’t a bad song exactly, but I was hoping for something a bit more explosive considering this is probably their last single together as a unit. 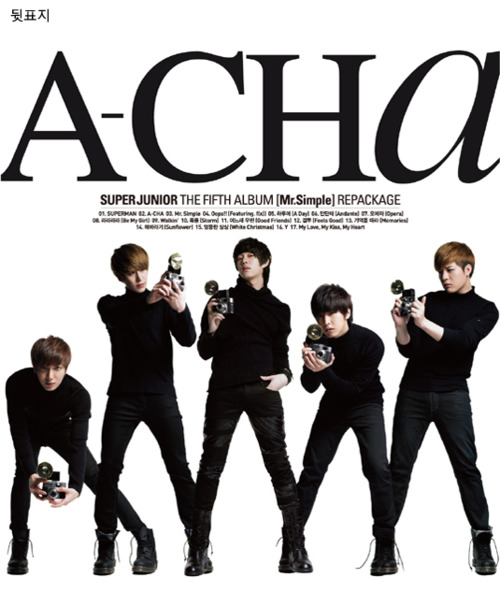 As for the rest of the repackaged album, there’s a collaboration with SM and Europop’s illegitimate child f(x) called ‘Oops!!‘. Which um, well. Let’s just cross our fingers and pray it isn’t a cross-over between ‘Mr. Simple‘ and ‘Chu‘ or some other strange, potentially disastrous fusion (speaking of f(x), ‘A-Cha‘ sounds like a very f(x)-y single name. Oh god. A-cha, a-cha, ta, ta).

‘Adante‘ is a ballad composed by my favourite Canadian Gangster Henry from SJM, as well as Leeteuk. And on any other occasion the word ballad would put me off, but Lee teuk and Henry’s last piece was the outstanding ‘All My Heart‘ from BONAMANA’s repackaged, so I can’t wait to hear this!

The last track topping off the repackaged is ‘A Day‘, which sounds intriguing enough I guess.

All this cynicism on my part is not out of disdain for Super Junior, but out of concern and genuine care for their career. Honestly, I can not think of the last time I genuinely enjoyed one of Super Junior’s lead singles without having to compromise myself with:

“Well… it sounds okay after the 50th play”

“Well… at least the Music Video is cute- WHY, YESUNG, YES I WILL MARRY YOU!“

Their repackaged album is scheduled to be released on September 21st, and despite my tornado of cynicism above, I am still excited. And all I can do is hope ‘Superman‘ was a sign of good things to come, and that their new single does just a good of a job as ‘Superman‘ in showcasing their talent. Talent? Why, Ree, surely you jest? Well, only a bit. At the 9-member state Super Junior is currently in, there are more good vocalists than there are bad ones (if only just marginally), and the rest of them can do that fierce, angry growling/rapping which I found myself actually super loving in Superman. I’m not even being remotely sarcastic here, at all. I couldn’t find one person in Superman I could call out for being ‘useless’ (well, except for Siwon who disappeared halfway through the choreography… but I won’t go there).

Fingers crossed that ‘A-CHA‘ delivers, and that we finally let Super Junior leave with a bang! If the songs stellar, I won’t even care that the MV was filmed in another empty room- since that’s just how they roll.