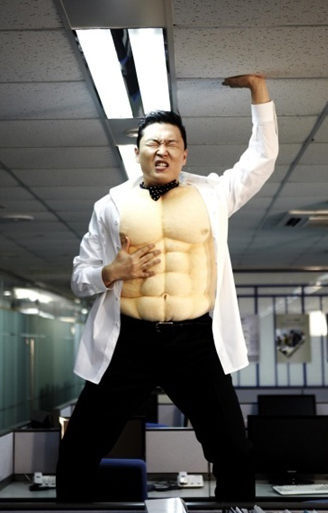 Psy exposes his fake muscular chest, sashays through a grocery store in high waisted pink trousers and finds himself pumping his fist in the air whilst standing on top of cases of Cass in his music video “Right Now” which was released almost a year ago. It’s a magical performance, but one that minors will not be able to see or hear.  “Right Now” joins the list of banned songs by the Ministry of Gender Equality and Family, a  list that is becoming scarily exhaustive and somewhat tardy.

Banned for the lyric “Life is like toxic alcohol,” Psy retorts, “This is exactly why life is like toxic alcohol.” For a country known for its heavy drinking culture, where advertisements for beer are of utmost glamour, the banning of “Right Now” is ludicrous and should be the least of our worries.
Naturally fans are upset, and they should be. Shouldn’t this lyric be esteemed by the ministry for telling kids that yes, life is like toxic alcohol? First of all, Psy is teaching kids that alcohol is toxic. And every kids knows not to drink toxins, right? What a great lesson. Second, Psy is informing kids that life is depressing. He is teaching kids reality, crushing their false hopes for bright futures. That’s important for future generations because when I was a kid I had this false notion that I would grow up and become God, and have Bart Simpson as a boyfriend. Psy is telling kids, no, it’s not magical. Don’t expect it to be. Wisen up. Life is like toxic alcohol.

Think of all the lessons minors could be learning from this one life changing lyric. But now they won’t hear it. Now they will live in a world where alcohol is not toxic, but a great tool of seduction. They will live in a world where they have this false idea that in life you always get what you want, and boy, won’t they be disappointed when they realize that’s not true. Minors are doomed without this lyric.
We should be thankful that kids are still allowed to listen to  f(x)’s Hot Summer, a song about the life threatening situation of global warming (that’s what it’s about, right?.) But it won’t be long before lyrics like “hot hot summer” are banned as well.  Psy tells us the bitter truth, and if that’s why he’s being banned, then the future of KPop is taking a very scary turn.