2NE1 performs "I am the Best" on Music Station 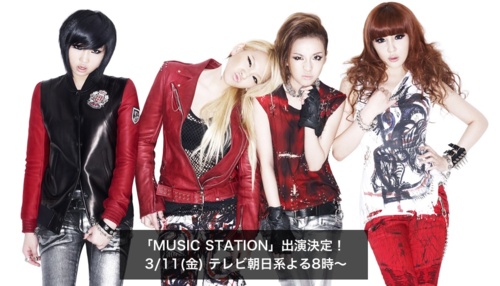 I don’t think I’ll ever understand why The Powers That Be decided to kick off 2NE1‘s Japanese promotions with this song. It’s not a bad song by any means, but it doesn’t translate well into Japanese and the hook – which is arguably THE catchiest hook to come out of K-pop this year – retains its catchiness factor only if it’s in Korean. And a Korean hook to a song that’s supposed to kick off a highly anticipated Japanese debut…well, it just doesn’t look very good, unfortunately.

Regardless, 2NE1 made their first appearance on Music Station in Japan with “I am the Best.” Check it out below!

Firstly, I can’t be the only person here who’s relieved that they cut out CL’s atrocious English rap for the live performance. Although Minzy’s lines are still some of the most coherently incoherent examples of English I’ve ever seen in K-pop, I think that CL’s “err’body’s gettin’ freaky” is a bit too much for me to handle.

Secondly, I know I constantly whine and complain about the recent slew of K-pop artists debuting in Japan, but I’m surprisingly okay with 2NE1 marching into Japan and debuting with a song that’s 50% Japanese and 50% English and was just pulled off of their latest Korean album. Like it or not, the climate of Hallyu during BoA and DBSK’s time is a lot different from the climate of Hallyu now, and the difference between the two isn’t completely a bad thing.

But I digress. If you’re anyone who’s anyone in the K-pop industry, debuting in Japan has become something that you just do. And as a major player within K-pop, it was about time that 2NE1 made their debut in Japan. It’s refreshing to see the contrast between 2NE1 and the mold for the typical Japanese girl group, but that doesn’t necessarily mean that 2NE1 will be well-received in Japan. But to be honest, I don’t think YG’s all too concerned with 2NE1’s success in Japan – as aforementioned, debuting in Japan is a fairly normal occurrence nowadays and I wouldn’t be surprised if this debut was just another thing for YG to cross off the list.

Besides, 2NE1 allegedly has bigger fish to fry, what with the news of their collaboration with Will.I.Am constantly popping up at the top of the group’s resume. Speaking of which, whatever happened to that, anyway?