Ready for another year of 5 Things?  I’m not sure I am.  Kpop, meet Cpop, Life imitates Kdrama, Sweet Revenge breaking the rules in Kpop, Quarreling Bosses, and Park Bom and her unnie at NOLZA.   These are the 5 Things that happened in Kpop last week that I think were a little bit more special than the rest.

As part of an Mnet Global special, Chinese Pop artist Wei Chen made a guest appearance on Mnet’s M!Countdown premiering his new songs “Po Xiao” and “Run Away” featuring Lee Joon and Thunder of MBLAQ.

It was a solid performance, I loved the song “Run Away.”  It’s great to see collaborations like this in Kpop, it’ll only make relations between Kpop and other Asian music industries stronger.

In Best Love, Lee Seung-gi made a cameo as an egomaniacal version of his true self and takes on Cha Seung-won‘s Dokko Jin.  When Seung-gi balks at Dokko Jin’s request that he help out Gu Ae-jung with an appearance on his variety talk show, Dokko Jin threatens to go after Seung-gi’s Refrigerator CFs.  Well, looks like the folks at Samsung Zipel, the actual regrigerator line that Seung-gi promotes, knew a good opportunity when they saw it and brought Cha Seung-won on board for a CF with Seung-gi.  The actual CF hasn’t dropped yet, but check out this making of video of the two.

The Hong Sisters have always been the best at having their Kdramas imitate real life in their dramas and now it looks like some real lifers are making the best of their Kdrama humor.  A second making of video was released on the 31st, so it seems that they’re expecting a good response from the CF, can’t wait to see the real thing.

New all girl Kpop/rock band Sweet Revenge is taking Kpop by the horns with the title song off of their debut mini album Rule Breaker.  I like these girls’ cute yet rocker vibe and their self composed song “Rule Breaker” kills, the lead singer’s vocals are a tad high pitched for me, but it’s still great.  Check out the MV for Sweet Revenge’s “Rule Breaker.”

The group, known as the “SNSD of Hongdae,” is made up of members Kim So-yeong on vocals, Kim Mi-jung on guitar, Lee Hwa-yeon on bass, and Jang Hyun-ah on drums.   They made their live debut on last week’s Music Bank and  pretty much kicked ass- I have high hopes for these girls. 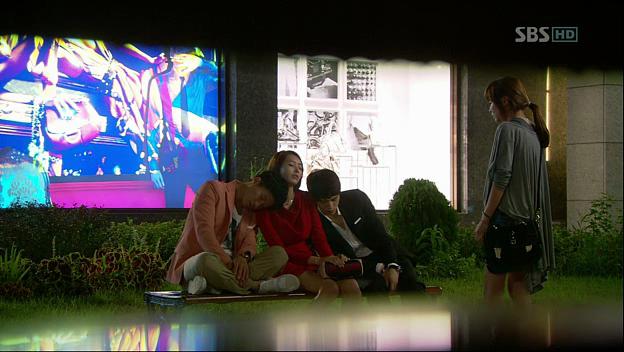 Last week’s episodes of Protect the Boss were just too awesome beyond words.  The Kdrama is great at letting these character be so real and not a cliché.  The fight between Cha Ji-heon and his cousin Cha Mu-won after Ji-heon witnessed Mu-won‘s confession to Noh Eun-seol was just classic.

I seriously hope that Jaejoong doesn’t fight like that (was that supposed to be a bitch slap?) and the fact that the two were fighting like two prissy girls pushing and pulling hair?  I died laughing.  I really love how the show portrays the Cha family, like when Halmoni punishes them all for fighting and getting caught doing it by making them all eat dinner together. I find it hilarious yet heartwarming how Ji-heon, Mu-won, and even Na-yoon all look for and rely on Eun-seol so much, she’s like the dependable and fun best friend they all never had.  I hope at the end of the drama that they’ll all be able to be friends (sorry, wearing my rose-colored drama watching glasses).  I also really love the character Myung-ran, Eun-seol’s best friend, who supports her and understands her so well.

Protect the Boss is now right up there with City Hunter as my top Kdramas of 2011.

Park Bom and her unnie at NOLZA 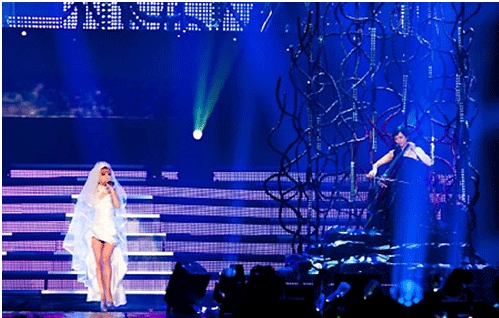 Earlier this year Park Bom had let fans know through a Me2day post about her older sister Park Go-eun, who is a famous cellist.  She and Sandara Park attended her sister’s solo concert in January of this year and as the encore of her concert, Park Go-eun performed Bom’s “You and I.”  I guess YG decided to make it a family affair at 2NE1’s NOLZA concerts (ahhh, I wish I could’ve been there for that) and had Park Go-eun as a guest accompanying Bom on her solo performance of “You and I.”  Here’s the best fan cam of the performance I could find, although it doesn’t show Park Go-eun playing cello.

I think that must’ve been a special performance for both sisters, what a talented family.