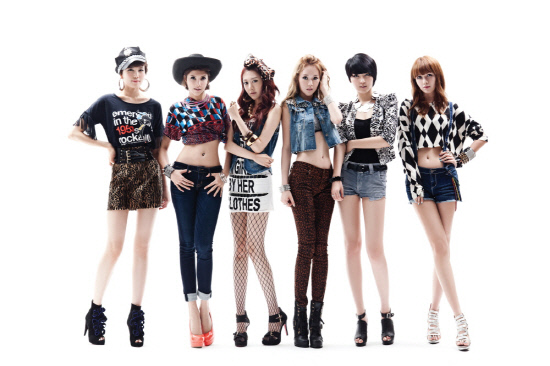 April Kiss will release their debut single ” Wannabe” on September 1st.   A few tracks have made their way on to Youtube from their mini album along with a video showcasing the girls in a behind the scenes video shoot.  The new tracks ” Hello Bus,” “Hello Bus (rap version),” and “April Kiss” are a huge improvement from their 2010 disaster of a teaser.  The vocals are much stronger and less whiny and they made a major concept change.  They are also no longer wearing questionable promotional wear with large holes. They seemed to have stepped up their game.

“Hello Bus” is a catchy song and the typical kpop sound. This is a upbeat song to dance to. Nothing special to point out beside the fact the song is a tad reminiscent of the Pussycat Dolls’ ” When I Grow Up”

This track is the same as the original “Hello Bus” but with a rap in the song and a Lil Jon style rap in the beginning.

“April Kiss” is another upbeat track and catchy as well. I like this track much better than “Hello Bus”.  This is a club type track and a much better showcase of vocal talent.  It also seems that Koreans have discovered the phrase LEGGO.

Overall April Kiss has vastly improved from their 2010 teaser, they have more vocal talent than excepted.  Up against other rookie groups debuting recently, I think they will come out quite well.  Catchy music always wins in the end.  After hearing tracks from their debut album do I still think they aren’t the ” female 2PM“?  Yes, I think they are completely different.  Hopefully after their debut they will start cultivating their own image.  Now after hearing everything, they are not bad at all.  However, to live up to the hype of being the female 2PM they should concentrate on developing stage presence in the area of acrobatic dancing like 2PM.  A girl group with some hardcore dance skills would really set them apart from other rookie groups like Chocolat and Stellar. I think this one improvement would help them hold weight in Kpop apart from already established groups with huge fan bases. I think they have the potential to succeed having heard these tracks, they just need to develop more in some areas and they could be just as popular as 4 minute and Miss A.  They have some vocal talent now they need to show us their stage presence.