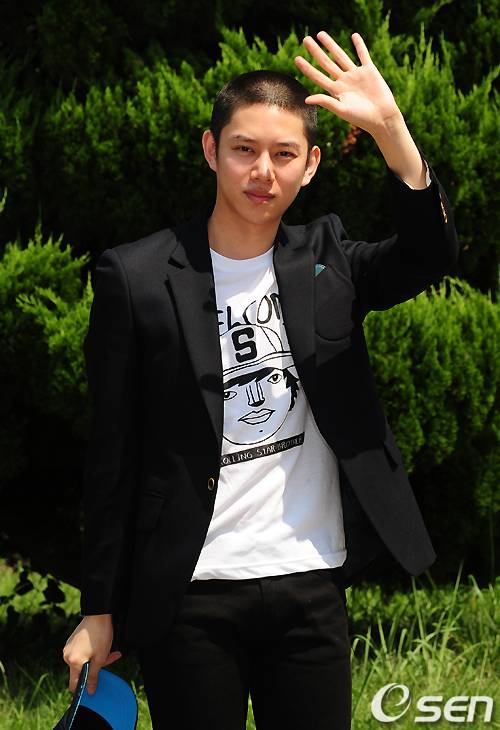 On September 1st, Super Junior‘s Heechul formally enlisted into the army.  Showing up at camp in his buzzed hair in front of a crowd of fans all over the world.  Heechul originally wanted a quiet entrance, asking fans to not show up and most surprisingly for his fellow Super Junior members to say their goodbyes in the dorms.  He will be undergoing training for a month before becoming a public service personnel for the next two years.

Heechul is one of the most dominant and well-known Kpop stars and definitely one of the most popular amongst Super Junior.  In the past, he has garnered a reputation of being a drama queen and attention-seeker, an image he certainly lives up to.  His constant Twitter updates, many times disconcerting for fans and sometimes downright bizarre, has brought him much attention.  His bipolar tendencies and constant mood swings were no secret.  I myself have never been a fan of Heechul, finding him annoying and his antics over-the-top. Recently, especially with the news of his enlistment blowing up all news outlets, I find myself growing more distasteful towards the man.

However, his attempts at a quiet entry into the army came as a pleasant surprise for me and I admit even charmed me a bit.  So often when big name stars start their army duty, it becomes a full-blown press conference and media affair with the public goodbyes to fans, the revealing of the buzz cut, and the competition to see who can draw a bigger crowd.  The whole thing becomes a publicity scheme, taking away from the importance and sacrifice that is army duty.  Hundreds of other men enlist every day, yet they don’t get the same recognition.

I admire Heechul for trying to keep at least one part of the whole affair low-key.  He broke away from his normal status quo (which could lend to the theory that he is indeed bipolar) which is definitely a change for the good.  Maybe in the future, other Kpop stars will follow his lead. What do you think?  What’s your opinion on the entire idol/star enlistment issue?  Did Heechul start a trend in a better direction?