What will become of Daesung? 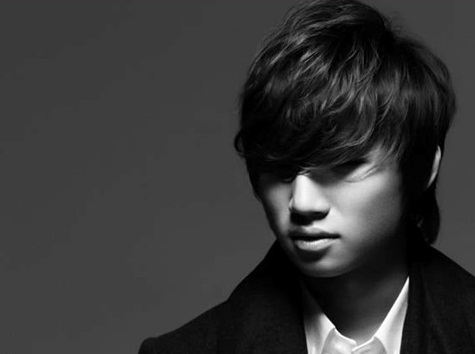 At 10:00 am KST on the 24th,  Yeongdeungpo police held a briefing to release the results of the autopsy conducted by South Korea’s National Institute of Scientific Investigation (NISI) of the victim in the traffic accident that Big Bang’s Daesung was invloved in. Police had requested that the NISI conduct the autopsy due to the mystery regarding the accident and because they were unable to get any conclusive evidence from the CCTVs surrounding the area.  The critical piece of information that police have been waiting for is the exact time of death of the victim Hyun, which would determine the charges that would be brought up against Daesung.

So far, the facts had been that on May 31st Daaesung was involved in early morning accident as he crossed a bridge driving from Hapjeong-dong to Yangpyung-dong.  A taxi driver had stopped after seeing a fallen motorcyclist in the road and had put on his emergency blinkers.  A second driver was able to swerve and avoid the motorcyclist also, but Daesung did not see the motorcyclist and ran over him and hit the taxi cab.  Here’s a pictorial of the events. 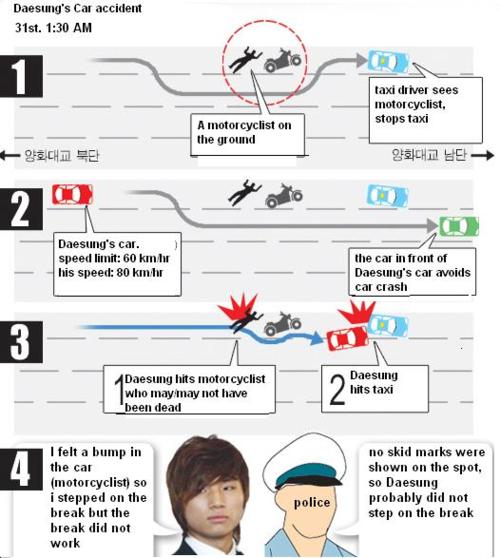 At first the deceased was thought to be a victim of a hit-and run, but later it was revealed that they thought that he got into a accident due to driving under the influence of alcohol.  Police had also said that Daesung was negligent in driving by not seeing the victim on the road and speeding.

In the briefing, police revealed that Daesung will be charged for negligence while driving which led to the death of the victim.  The findings state that the victim hit a street lamp which did cause significant injuries to his face, neck and back and caused him to be lying on the road.  It was alluded to that it was difficult to differentiate which injuries occurred from which accident, but that only a little over 2 minutes passed between both accidents and that they do not believe that the victim died within those two minutes laying the blame for the death on Daesung.

If Daesung is charged for Negligent Driving and Manslaughter (they have not revealed the exact charges he will face), he could serve up to five years in jail and pay no more than 20 million won in fines.  In previous reports, experts had commented that even in a worst case scenario (which this sort of is) they didn’t think that Daesung would have to serve prison time.  Their reasons were that when looking at precedent in other cases with similar situations, the guilty party served probation and/or paid a fine instead.  Due to the circumstances with Hyun causing his own accident by driving under the influence which is why he was lying in the road; the fact that Daesung was not under the influence, stopped to render aid, and has no prior criminal history; and that this was just a really unfortunate accident- I would hope that that would be the case.

As a fan of Daesung, it was really heart breaking to hear about the accident when it happened and these findings were not what we had hoped for for Daesung.  I will say one thing though, that in the end what I had hoped for the most was the truth.  I  do believe that the police and the NISI handled the matter professionally and did their best to find the truth and that they did not let any other outside factors mar their investigation.  For justice to prevail, Daesung should be treated just like any other member of the South Korean Society.  Any efforts to give him any special treatment or any unusually harsh treatment would be an injustice to the victim and to Daesung.

Fans know that Daesung is such a sweet soul and we’ve already read reports of how hard he has been taking the death of the victim, so any special treatment would have undeniably held a heavy toll on Daesung’s conscience.  I do hope that Daesung does not end up having to serve prison time and instead serves probation and\or pays a fine.  It would be an injustice if he is sent to prison because it really was a case of being at the wrong place, at the wrong time- it could have been anyone that missed seeing the fallen motorcyclist on the road, it’s just that in this case it happened to be a member of one of Korea’s most popular bands.