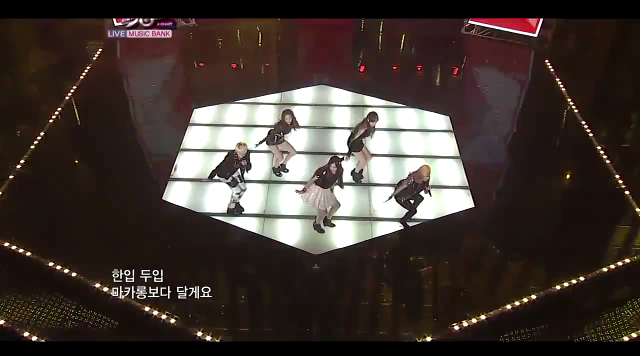 Man, I stopped following MuBank for two weeks due to finals and felt so out of touch with the K-pop scene…but after today’s show, I get the feeling that I didn’t really miss anything. *shrug* Beast and Jewelry make their comeback today, U-Kiss says goodbye, and Patricia is sitting in front of her computer with a big, pretentious dish of hummus and pita while making snide comments about every performance.

X-5: “The Show Is Over” – Okay, so they gave the handheld mic to the one member who can actually sing. That makes things easier.

Rania: “Dr. Feel Good” – For once I can say that I like their outfits, but only because that shade of blue is gorgeous.

Infinite: “Can You Smile” – Props to Infinite for trying to expand their performing horizons, and I’m especially impressed at Mr. Guitar Man with his guitar man skills…but I highly prefer these guys’ dancing. Highly.

SISTAR19: “Ma Boy” – When I first heard about SISTER19, my first thought was that SISTAR itself did not need a subgroup period, let alone one composed of two people. I was right.

U-Kiss: “0330” – Farewell performance. Man, these guys had a pretty good run with this song – not necessarily in terms of music show awards, but “0330” was a huge turnaround for U-Kiss, and I’m actually excited to see what they’ll come out next.

Eru: “Countrified and Immature” – Gimongous string orchestra AND purple suit. Can’t get much fruitier than that.

Im Jung-hee: “Golden Lady” – Chicks with guitars. I appreciate that.

CNBLUE: “Don’t Say Goodbye” – Every rocker must angst his little rocker heart once in a while. Angst, boys, angst!

Baek Ji-young: “Bad Girl” – This is one of the few songs I actually liked from this week’s show. The song is really great, but for some reason, it didn’t really translate to the stage all that well. Hm.

Heo Young-saeng: “Let It Go” – A solo stage by that SS501 member with the name that didn’t sound like everyone else’s name. I didn’t think this was the most inspired performance, and I have a huge thing against idols performing in sunnies unless they’re recovering from eyelid surgery or they’re Kim Tae-woo. But he’s wearing a silver sash, and that wins points with me.

Beast: “Fiction” – LOVE EVERYTHING. LOVE THIS ALBUM, LOVE THE CHOREOGRAPHY (yes, even the wobbly-knees dance), LOVE THE VOCAL PERFORMANCE, LOVE THE OUTFITS. Don’t love the hair, but we’ll let that go for now. In case it wasn’t clear enough, I’m in love with everything Beast’s done for their album, and now I have great live performances to look forward to. Wheee~

(Also, was that giant chandelier there before? Dang, I want one of those for my dining room.)

f(x): “Pinocchio (Danger)” – Yeah, I’m pretty sure SM has some sort of stronghold on the last performing slot on MuBank, but hey – not complaining. I’m starting to tire from this song, but the girls look gorgeous. Also, I love how they give Amber a handheld mic…as if she actually sings in the song. Heh.

f(x) wins K-Chart for the week; are adorable as always. The squealing, the squealing!

Other Performances from this week:

Untouchable feat. Oh Jin-seok: “You You”